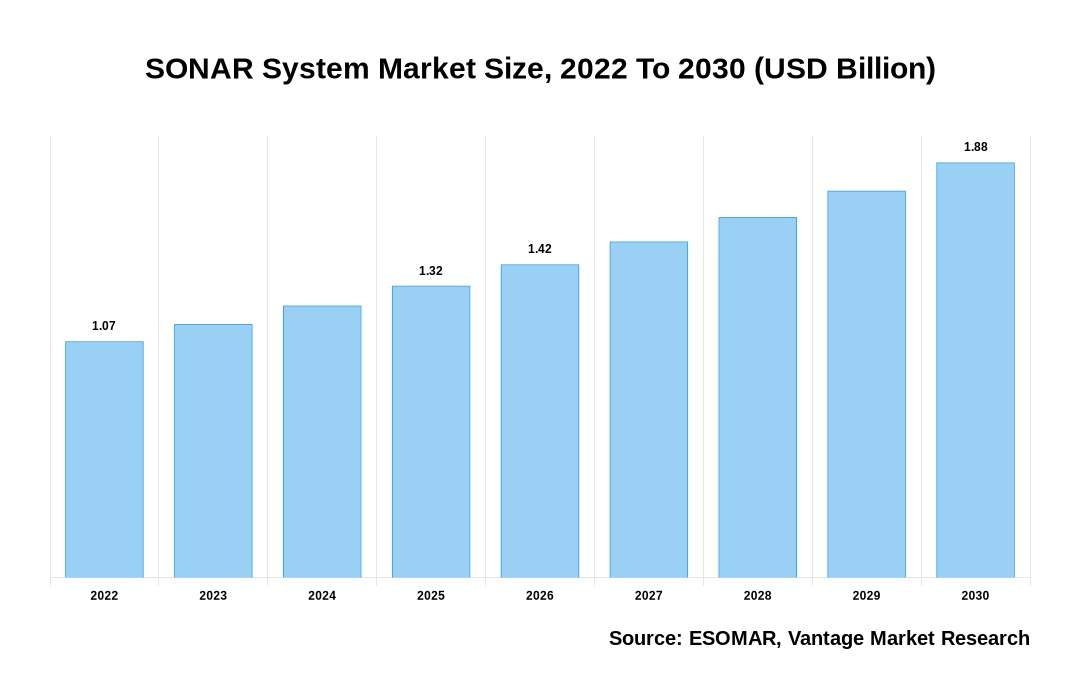 The Global SONAR System Market was valued at USD 1.9 Billion in 2021 and is projected to reach a value of USD 2.9 Billion by 2028. The Global Market is anticipated to grow to exhibit a Compound Annual Growth Rate (CAGR) of 7.60% over the forecast period.

SONAR System, in simple terms means the navigation and ranging technique, where sound waves are used for obstacle detection and navigation. This technique is generally used in the marine circle because the sound waves travel farther than the radar and light. It is useful for exploring, communicating, and mapping oceans. Sonobuoys transmit and record underwater sounds utilizing a sophisticated radio transmitter and a transducer. The special-purpose buoys also provide other environmental information, such as water temperature and wave height. It is projected that the market would expand because of the growing use of sonobuoy in military boats. Also, the SONAR System for fish controlling employs a deep neural network. In aquaculture farms, the need for fish monitoring is anticipated to increase due to the rise of fish resources. An underwater optical camera and high-precision imaging SONAR System make up the deep neural network SONAR System.

The device allows for nocturnal monitoring and aids in developing more effective fish farming. The high cost of SONAR System development is a significant barrier to business growth. SONAR System data recorders, an inertial navigation system, a Doppler velocity log system, and SONAR System electronics make up the product. The market’s expansion is obstructed by the SONAR System’s maintenance and high installation cost. The COVID-19 pandemic's immediate effects on the naval industry have caused a delay in the manufacturing of naval vessels since there is less demand as trade and maritime activities are curtailed.

Based on Product Types:

The SONAR System Market's Unmanned Underwater Vehicle (UUV) SONAR Systems sector is anticipated to experience faster Compound Annual Growth Rate (CAGR) growth over the forecast period. UUVs are outfitted with cutting-edge active SONAR System to enable the best data collection for characterizing and tracking the movement of hostile submarines at a distance. For instance, the DARPA-funded SHARK (Submarine Hold at RisK) UUV from Applied Physical Systems functions as an active SONAR System platform that can effectively recognize and track the movements of stealth submarines.

Among the Application segment, the Anti-Submarine Warfare (ASW) segment was the most significant revenue contributor in the global market in 2021. Anti-Submarine Warfare (ASW) is an underwater warfare branch that employs surface warships submarines to locate, track, and destroy enemy submarines. Torpedoes and naval mines are standard weapons used to target submarines, and they can be launched from a variety of air, surface, and undersea platforms. Following the development of submarine-launched ballistic missiles, which substantially increased the perceived lethality of submarines, ASW capabilities are frequently regarded as of significant strategic importance. Big firms like Thales and Ultra Electronics have put a lot of money into AWS since it has proven its worth again and over.

Due to recently introduced development programmed on relevant submarines and other underwater vessels and increased usage of both surface and underwater naval vessels in nations like the US, the market in North America accounted for a significant revenue share of the target market in terms of revenue contribution as compared to that of markets in other regions. SONAR System s will become more popular in the Americas because of increased investment by nations like Brazil, Canada, Mexico, and Argentina in improving their navies. Over the next ten years, the market in the Asia Pacific is anticipated to experience somewhat faster revenue growth.

This can be ascribed to significant defence spending by China and developments in regional shipbuilding capacity by a number of Asia Pacific countries. Over the course of the projection period, the markets in Latin America, the Middle East, and Africa are anticipated to develop at a moderate rate relative to the worldwide SONAR System Market.

SONAR System Market to Reach Valuation of USD 2.9 Billion by 2028 – Growing Use of SONAR for Aquaculture Farms Drives the Market
In terms of revenue, the Global SONAR System Market is expected to reach USD 2.9 Billion by 2028, growing at a Compound Annual Growth Rate (CAGR) of 7.60% from 2022 to 2028. Factors such as increasing use of these systems in Anti-submarine Warfare, increasing adoption of preventative defense strat...
Read More

What is the global demand for SONAR System in terms of revenue?