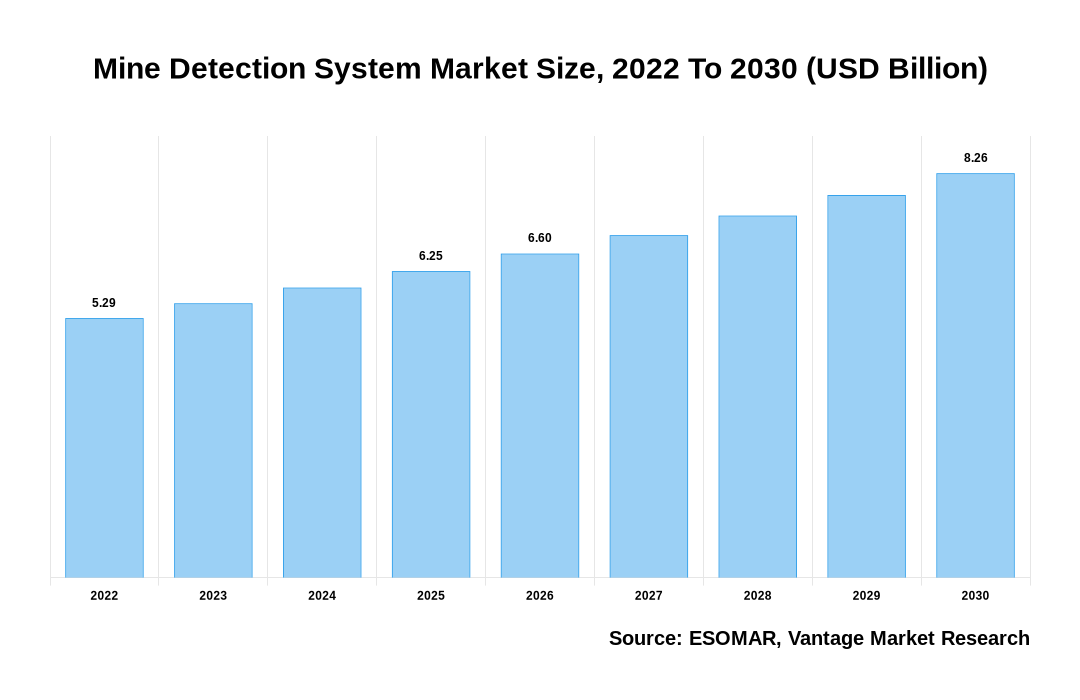 The Global Mine Detection System Market is valued at USD 5.02 Billion in the year 2021 and is projected to reach a value of USD 7.09 Billion by the year 2028. The Global Market is forecast to grow exhibiting a Compound Annual Growth Rate (CAGR) of 5.9% over the forecast period.

Global players have invested heavily in mine detection systems in order to provide new and advanced technologies to end customers such as defense forces, paramilitary forces, and border security forces. The increased need for better mine detection among military and naval forces throughout the world is driving up investment in new product development. The frequency of bilateral military conflicts between states is increasing at an alarming rate, prompting a higher need for countries' defense forces to improve their security measures. New weaponry and fighting systems are being developed to suit the needs of battle. Electronic warfare technology has been integrated into unmanned systems as a result of the emergence of digital battlefields. As a result of these technologies, governments' buying priorities have shifted to keep up with expanding military demands.

The growing relevance of unmanned systems in tactical and strategic roles in modern warfare has prompted the development of new, effective, and cost-efficient warfare technologies that reduce human mistakes and loss. To enable safe data transmission, these devices use electromagnetic radiation. These systems must fulfill a variety of critical duties in a variety of threat scenarios. They must use SIGINT techniques to identify all emitters in a target region, ascertain their geographic positions or mobility ranges, describe their signals, and use thermal imaging to locate the mine.

Due to the complexity of these systems, achieving the performance levels needed for next-generation unmanned electronic warfare weapons becomes a daunting undertaking. To function in high-magnitude signal settings, these systems require complicated architectures. Modifying and programming unmanned systems is one of the most difficult tasks for manufacturers. To function in a congested electromagnetic (EM) environment, advanced technologies are necessary, and a cost-effective open system approach will aid in achieving difficult design goals.

The handheld segment had a larger market share in 2021. Handheld devices are attractive mine detecting sources with strong demand due to their low cost and broad use by homeland security. The need for mine detecting systems has been steadily increasing in recent years. For decades, military troops and homeland security teams have relied on these detectors. As end users continue to acquire these detectors, it is projected to drive the mine detecting system market in the approaching years. The demand for autonomous marine vehicles on the battlefield for surveillance and mine detecting capabilities is expected to grow during the projection period.

The defense sector in many nations is the principal end-user of various types of mine and IED detecting equipment and devices due to the ongoing threat of IED blasts during cross-country operations. Moreover, the demand for IEDs in the homeland security sector is growing, particularly in terrorism-prone countries like India, Israel, and others. For example, India is continually investing in counter-IED technologies and acquiring MRAP trucks with counter-IED capabilities for its state forces fighting IED strikes in terrorist-infested areas.

Segmentation of the Global Mine Detection System Market:

What is the global demand for Mine Detection System in terms of revenue?