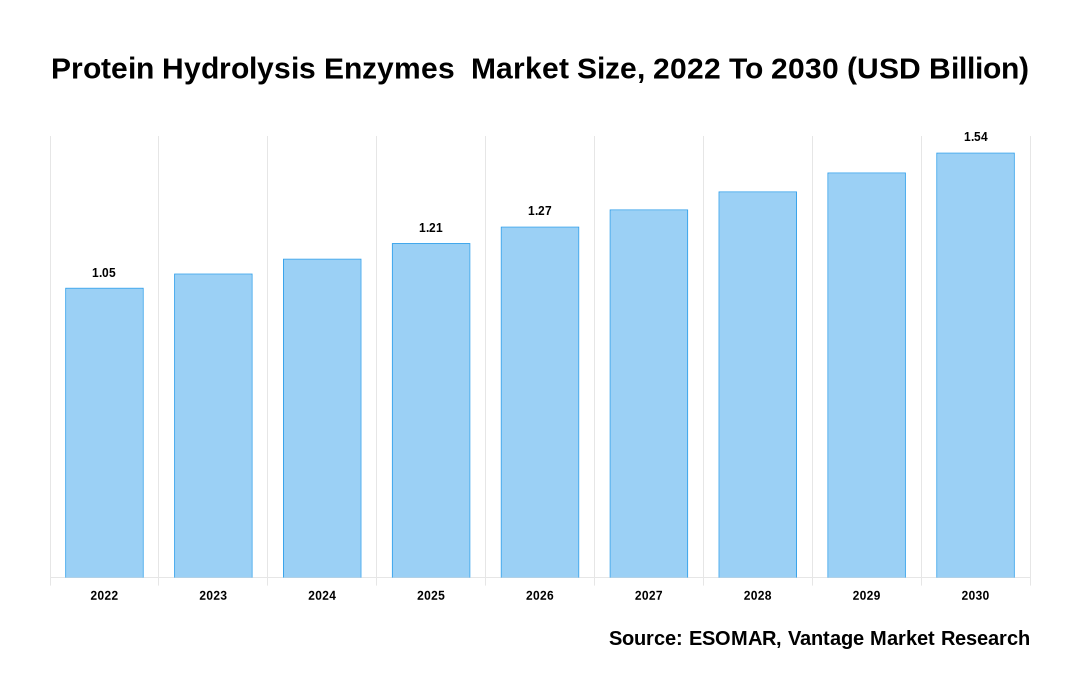 Global Protein Hydrolysis Enzymes Market is valued at USD 1.89 Billion in 2021 and estimated to reach a value of USD 2.79 Billion by 2028 at a CAGR of 5.2% during the forecast period, 2022–2028. The market for all types of food enzyme has been experiencing high demand responses. Food manufacturers use these enzymes to increase their production efficiency, enhance flavor and improve the texture of their products. What's more, increasing health awareness among consumers is also fueling an increased demand for enzyme-rich foods, which are thought to include lower fat and sugar content than foods without enzymes.

The rise in vegetarianism has resulted in a higher demand for meat substitutes, with soy protein-based products being popular alternatives. This has been accompanied by an increase of the price of soybeans over the last few years. The increased cost of raw materials is driving up prices for end consumers. In response to this trend, food manufacturers are increasingly aiming to improve the functionality of soy protein ingredients.

This trend towards increasing functionality is one factor driving demand for Protein Hydrolysis Enzymes . This process breaks down proteins into smaller fragments called peptides and further hydrolyses them into amino acids (the building blocks of proteins). The application of enzyme technology in food processing has allowed manufacturers to replace expensive traditional ingredients such as milk, eggs and meat with relatively inexpensive hydrolyzed proteins.

Global Protein Hydrolysis Enzymes Market is segmented by Sources (Microorganisms, Animals, Plants), Applications (Detergent Industry, Pharmaceuticals, Food Industry and Others), and region. North America is projected to dominate the global market due to strong presence of end-use industry in the US and Canada. On the other hand, Asia Pacific to continue witnessing fastest growth. By Source, microorganism segment to lead the global market.

Protein Hydrolysis Enzymes are used in a wide range of food applications such as bread, ice cream and bakery products. This is because their properties promote dough strength, uniformity, increased volume and crumb grain. The market for dairy products has also experienced considerable growth due to the enzyme's ability to increase the amount of cheese, enhance flavor and texture. Furthermore, using enzymes in meat processing can improve yields, reduce curing time and costs while improving product quality by reducing purge loss.

Protein Hydrolysis Enzymes are used for both functional and nutritional purposes; they act as emulsifiers to disperse oil or fat droplets in water, reducing the amount of fat in food products. These enzymes are also used to break down gluten into smaller components that can be substituted for wheat flour when making bread. Other benefits include improved taste, texture and digestibility due to their ability to break down proteins found in grains, seafood and vegetables.

By Source, Microorganism to Dominate the Protein Hydrolysis Enzymes Market

Microorganisms are the largest producer of enzymes and microorganisms’ proteins for different applications such as biofuels, bioremediation and production of high added value fine chemicals. Owing to their good performance in product concentration, high productivity and low production costs, microbial cells have been more popular than other sources. Even though they contain a great amount of secreted proteins, their production is still behind that of microbial enzymes.

Hence, the main reason for the high demand in these enzymes is owing to low cost and ease in purification as well as stability under wide range of conditions. In addition to these factors, most microbial enzymes are easy to preserve and store, as they are stabilized by an inert support such as silica sol.

The U.S is the largest consumer and producer of Protein Hydrolysis Enzymes , where it accounted for more than one third of global imports and exports in 2019; other major producers include Europe and China. The demand from North America is based on the high per capita protein consumption and growing availability of low-cost feedstock.

The European market for Protein Hydrolysis Enzymes has been led by Germany and France, which accounted for more than 40% of combined imports and exports in 2018; Denmark, Italy and the Netherlands also played important roles due to their high protein demand due to their dairy industry.

In Asia Pacific, China, India, Japan and South Korea accounted for more than 60% of total imports and exports in 2018. China is the largest producer and consumer of Protein Hydrolysis Enzymes in Asia; it accounts for about 40% of global production capacity.

Protein Hydrolysis Enzymes Market Anticipated to Reach USD 2.79 Billion by 2028
The Protein Hydrolysis Enzymes Market is expected to reach USD 2.79 Billion by 2028, growing at a Compound Annual Growth Rate (CAGR) of 5.2% between 2021 and 2028. Rising protease enzymes usage due to several advantages such as offered hydrolysis of protein peptides into the amino acids and others i...
Read More

What is the global demand for Protein Hydrolysis Enzymes in terms of revenue?