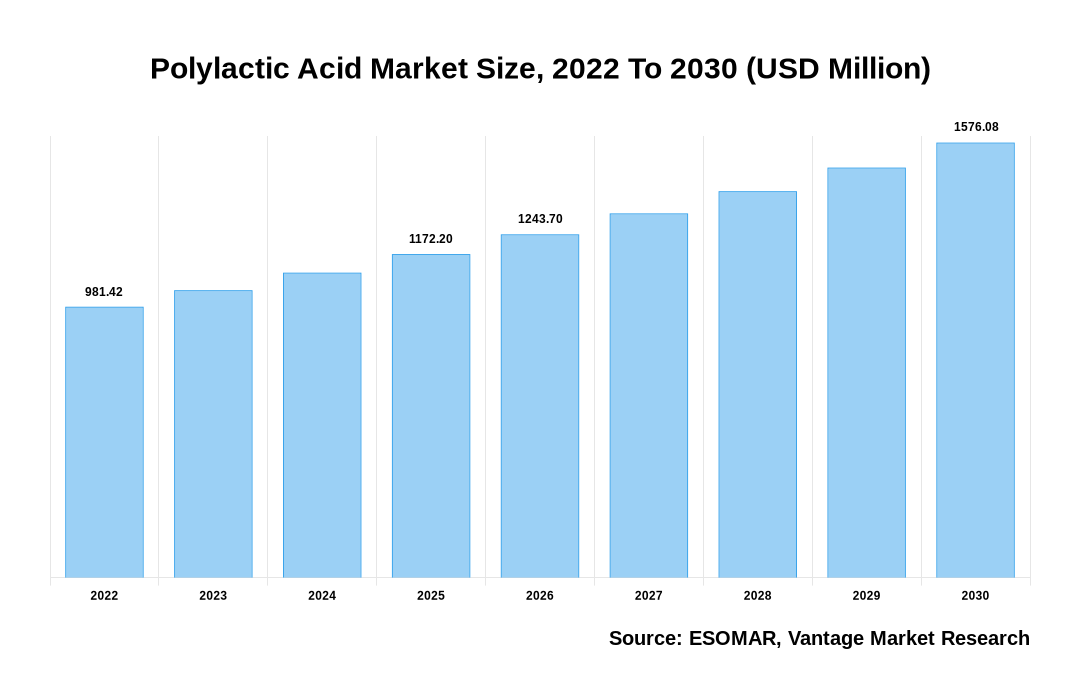 The Global Polylactic Acid Market is valued at USD 925.1 Million in the year 2021 and is projected to reach a value of USD 1334.7 Million by the year 2028. The Global Market is anticipated to grow to exhibit a Compound Annual Growth Rate (CAGR) of 6.3% over the forecast period.

The thermoplastic polymer materials that are often on the market are not the same as Polylactic Acid (PLA) products. It is primarily made from renewable materials like sugar cane or maize starch. In comparison to other biodegradable polymers, Polylactic Acid (PLA) is relatively inexpensive and has several advantageous mechanical qualities, which has led to its popularity as a material. Growing initiatives to stop using non-biodegradable conventional plastics and raising consumer knowledge of sustainable plastic alternatives both help PLA's market share expand. Plastics made from petroleum that are still commonly used take decades to breakdown and spend a lot of time to disintegrate and pollute acres of landfills. When Polylactic Acid (PLA) is removed and reabsorbed into the natural system, it degrades more quickly. Additionally, compared to conventional plastics, biodegradable polymers decompose significantly more quickly because to the actions of microbes.

However, one of the main performance problems with Polylactic Acid is that it has low barriers to air, water, and oxygen as well as low heat resistance. This limits its spread in several sectors, including the electronics and automobile industries. Additionally, Polylactic Acid's ability to penetrate a variety of applications is being hampered by its poor mechanical qualities, including low impact and tensile strength. The performance restrictions of PLA pose a significant barrier to the market's expansion. Furthermore, in several application categories, the market's growth is constrained by PLA's higher price compared to conventional polymers. The cost of producing PLA is typically more than that of traditional polymers. Since most techniques are still in the development stage and have not yet reached economies of scale, this is mostly caused by the high polymerization cost of PLA.

Based on End-Use Industry:

Based on type of End-Use Industry, the Packaging sub-segment is the biggest End-Use Industry for PLA, with a high Compound Annual Growth Rate (CAGR) during the forecast time frame. The requirement for practical arrangements has incorporated a few industry verticals, including food and refreshments, web-based business, and FMCG. The novel properties of packaging empower its utilization in different food and non-food applications like cigarettes, bread rolls, sugar candy stores, prepared products, noodles, and different tidbits. The ascent in web-based business has likewise expanded packaging necessities.

On the basis of Grades, the Thermoforming Grade sub-segment has tremendous development potential in different bundling applications like food, refreshments, and other shopper items. Thermoformed parts made of PLA have astounding clearness, similar to those shaped in situated polystyrene (OPS) and polyethylene terephthalate (PET). This, joined with the temperature prerequisites for item capacity, make thermoformed PLA reasonable for food bundling plate for prepared products, organic products, and vegetables.

North America dominated the market in 2021 whereas, Asia Pacific is projected to grow at the fastest CAGR during the forecast period

The highest geographical share in 2021—more than 40%—belonged to North America. The rising demand for bioplastics, one of the biggest markets for polylactic acid, is credited with this high share, which is followed by the Asia Pacific region. The market in North America is anticipated to be driven by initiatives encouraging environmentally friendly products as well as a rising demand for bioplastics.

Asia Pacific region is predicted to expand quickly in the Polylactic Acid market due to several key factors, including a shortage of fossil fuel resources, rising PLA demand from developing nations like Indonesia, Malaysia, and Thailand, and fluctuating oil costs. In terms of volume and revenue, China dominated the Asia Pacific Polylactic Acid Market. The growing demand for the product from sectors including automotive & transportation, electronics, textile, packaging, appliance, and medicine is what largely fuels the Polylactic Acid Market in Asia Pacific. Due to the rising food and beverage industry, notably in India and China, this region is anticipated to dominate the packaging market throughout the forecast period. During the projected period, it is anticipated that increased disposable income and a rise in packaged food demand will fuel demand for flexible packaging.

What is the global demand for Polylactic Acid in terms of revenue?