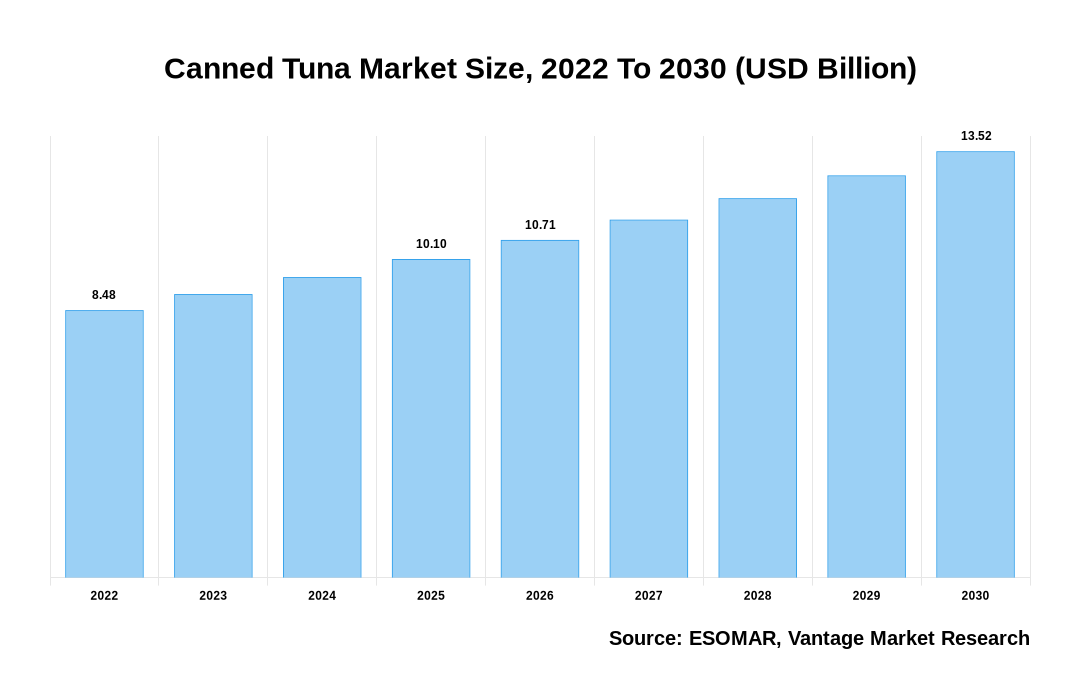 Canned Tuna Market- Based on Product, Distribution Channel and Region.

The Global Canned Tuna Market is valued at USD 8.7 Billion in the year 2021 and is projected to reach a value of USD 12.5 Billion by the year 2028. The Global Market is anticipated to grow to exhibit a Compound Annual Growth Rate (CAGR) of 6.3% over the forecast period.

Tuna is a piece of the mackerel Tuna family and a vital piece of the worldwide Tuning situation. Tuna is appreciated overall new cooked, frozen, canned, and like sushi. Practically 60% of all Tuna produce comes from the West and Central Pacific Ocean (WPCO). Since the all Tuna get from this locale is under the care of the Pacific Island Countries (PICs), these nations utilize their tuna assets as a wellspring of fostering their economies. A justification for this is that a significant number of these nations just have their tuna populace to call an asset for the monetary turn of events. It is a generally purchased thing by end clients, cafés, and canning businesses too.

Rising interest for Canned Tuna addresses a significant explanation as of now driving the worldwide Tuna Market. The bustling timetables of individuals today are welcoming a quickly expanding need for prepared-to-eat food, Canned Tuna being a well-known decision. Europe at present overwhelms the worldwide rundown of locales bringing in Canned Tuna. Center Eastern nations like Saudi Arabia, Israel, and Egypt have come up as probably the biggest shippers of tuna on the planet. This has to do with the way that import obligation expenses for Canned Tuna are exceptionally less in the Middle East. One more explanation for the prominence and request of Canned Tuna is its period of usability.

Numerous nations are growing quickly and their locals are changing too simple to cook, dependable, and universally cherished food things. These inclinations of individuals are a justification for the rising overall utilization of Canned Tuna. With expanding wellbeing cognizance, many individuals are moving from Canned Tuna to new and frozen tuna. Even though they cost significantly higher than Canned Tuna, individuals will pay, working with a higher monetary incentive for the overall tuna exchange. The tuna market can anticipate consistently developing worth if individuals stay aware of their food inclinations. Looking forward, the distributor expects the worldwide tuna market to show moderate development during the following five years.

Based on Type of Product:

Based on Product, the Skipjack segment is anticipated to have the fastest developing piece of the pie in the worldwide market. Skipjack tuna request in many nations is soaring which includes tote seine fishing, where a barrel-shaped net can be brought down around a school of fish with a shutting base. Skipjack tuna species is supposed to represent the significant offer attributable to its rising notoriety in the main nations and creating more.

That specific strategy is extremely famous because of the way that in this technique for fishing, the degrees of by catch can be decreased while it is a proficient procedure to get more measures of tuna. From that point onward, the fishes might go through minor handling in handling plants or fisheries, which are situated close to the docks for the most part for helpful dumping.

Based on Distribution Channel:

Based on Distribution Channels, Supermarkets/Hypermarkets are the favored channel for buying fundamental and superfluous items by the buyer because of the wide accessibility of an alternate scope of items under a solitary rooftop. The presence of product distinct aisles and various bundling schemes offered by the mass merchandisers enhance the purchasing experience of the consumers. Alongside this, it offers helpful buying as different Tuna items are accessible in various brands and cost ranges. The fast urbanization and changing way of life have prompted many new mass merchandisers to be laid out which stand out.

Asia Pacific is accounted to grow at the fastest Compound Annual Growth Rate (CAGR) during the forecast period. The Asia Pacific is plausible to list the surprising by true of filling in the interest for the Canned Tuna in advancing economies attributable to expanded inclinations for the accommodation food. In like manner, the most extreme of the organizations working in the market is progressing vigorously to get the unobtrusive edge in the canned fish market in the Asia Pacific. The Asia Pacific holds the third-biggest piece of the pie attributable to the huge buyer base in the district. The developing millennial populace in the district and their rising tendency towards accommodation food has added to support the local market. The rapid urbanization and fuse of western ways of life have expanded the interest in the market. The purchasers are currently generally involving Canned Tuna for food arrangement because of its comfort of cooking and longer rack security. This has further fuelled the market development.

What is the global demand for Canned Tuna in terms of revenue?