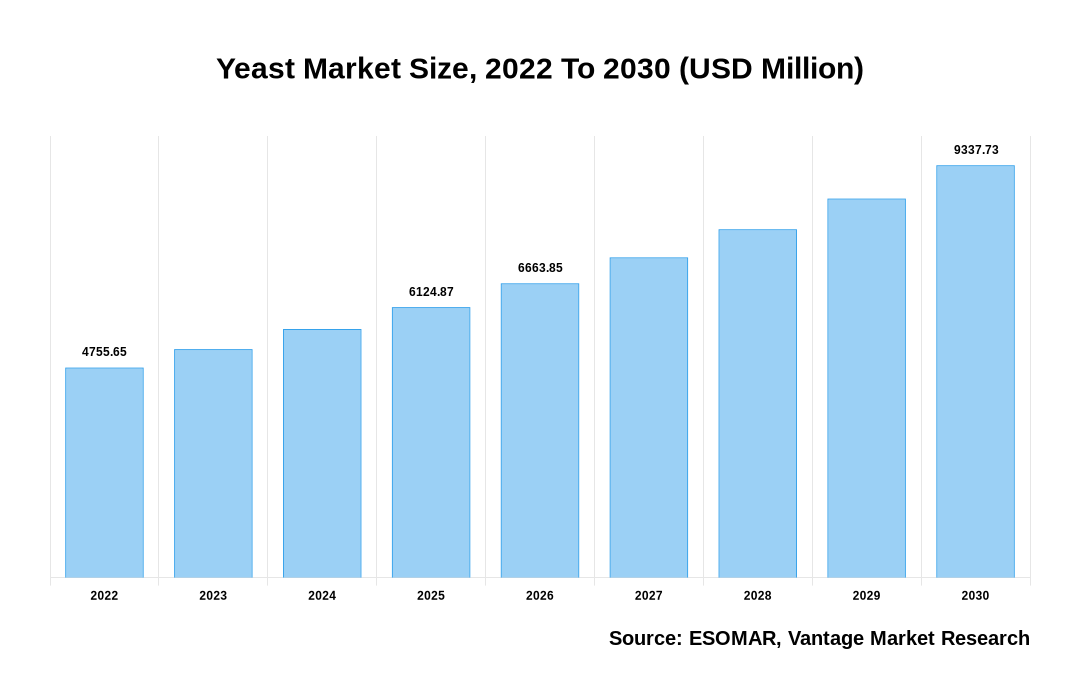 Yeast is a commonly used fermenting agent that helps bread rise and alcohol ferment. The increased adoption in recent years is due to the growing demand from the end-user sectors such as food and beverages, contributing to the growth of the global Yeast market in the forecast period. In addition, the growing awareness of health benefits associated with the consumption of fermented food as the fermented food contains microorganisms such as good probiotics bacteria and Yeast resulting in the transformation of food, can be considered as one of the major factors driving the demand for Yeast in the upcoming years. The rapidly expanding bakery industry worldwide, the shift in preference from traditional food to ready-to-cook products is further expected to boost the growth of the market over the next few years. The growing use of bioethanol as an alternative fuel is contributing to the growth of the market, as bioethanol reduces environmental pollution and minimizes crude oil consumption.

By type, the baker’s Yeast segment is acquired the largest share in the market

The baker’s segment is projected to dominate the market, during the forecast period. This is due to the cost-effectiveness and wide application areas of baker’s Yeast in industries, such as food and feed. The growing consumption of bakery products, especially bread, in developed regions is projected to drive the growth of the baker’s Yeast market. As a result, rising bakery product consumption, particularly bread, adds to the market's growth in the baker's Yeast sector throughout the projection period.

By application, the food segment is estimated to acquire the highest share in the market during the forecast period

The food segment is estimated to grow at a rapid pace in the upcoming years due to the growing consumption of naturally-extracted ingredients, the high consumption of bakery products, and the rising demand for clean-label and free-from products. Yeast may be found in alcoholic and non-alcoholic drinks, nutritional supplements, canned and frozen meals, bakery, snacks, and savory dishes. Various Yeast fermented foods like bread, deep-fried dough sticks, and fermented rice products. Yeast is considered an ideal choice for a nutrition source for human beings as its nutritional characteristics include low fat, low sugar, and low calorie and high-quality protein, high-quality B vitamins, high-quality minerals, high-quality dietary fiber, and no cholesterol.

The European region dominated Yeast Market in the forecasted period due to an increase in the disposable income, increase adoption of weekend culture in most parts of Europe, and increasing demand for investment in R&D. The government has taken initiatives to enhance the technological developments in this region and also, European countries have a culture of drinking wine with dinner are key factors in the growth of the Yeast market. Moreover, the market in the European Union is mainly concentrated on bread production applications driving the Yeast market in coming years. In addition, in recent years, the amount of money created by the sale of yogurt and sour milk products in Germany has expanded, presenting the new potential for the Yeast industry in this region to develop.

The Asia Pacific Yeast Market is expected to witness significant market growth during the forecast period. This surge in its growth is due to the increase in the purchasing power of the customers, rapid urbanization, and the busy schedules of the working population. In addition, the demand for alcoholic beverages like beer and wine is increasing in the region mainly in countries like Japan, China, and India. Thus, these aspects are highly responsible to boost the growth of the Yeast market in the region. The growing western influence and rising health concerns among the population of Asia-Pacific are propelling the demand for Yeast in the approaching years.

Yeast Market is segmented as follows:

Yeast Market is tabulated as follows:

What is the global demand for Yeast in terms of revenue?