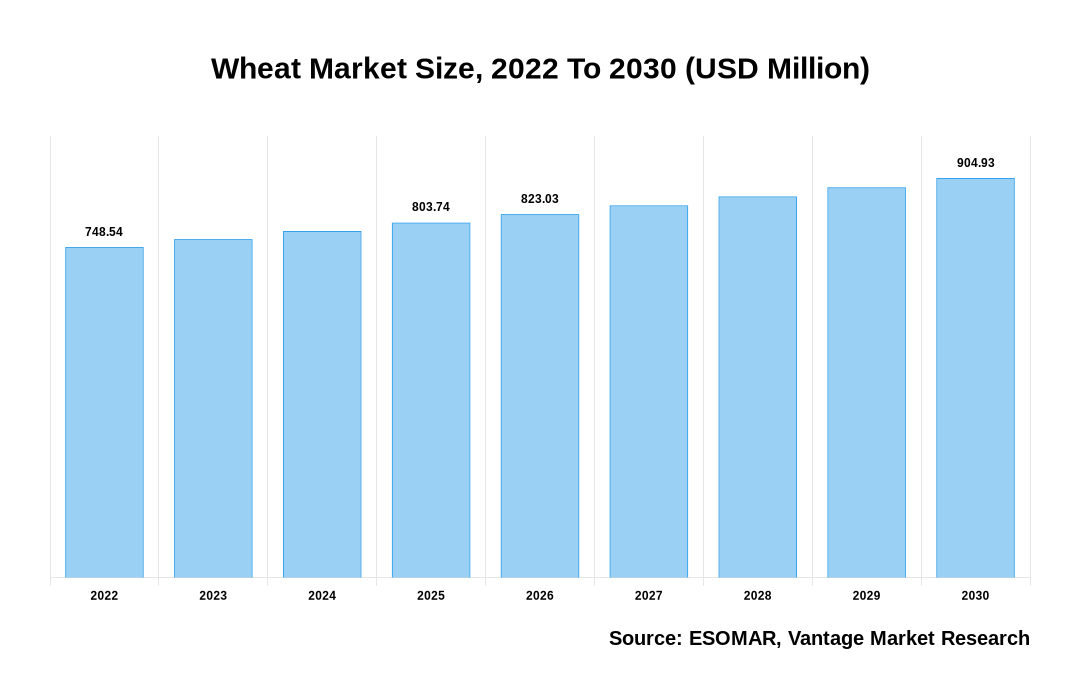 The Global Wheat Market is valued at USD 731.5 Million in the year 2021 and is projected to reach a value of USD 848.3 Million by the year 2028. The Global Market is forecasted to grow exhibiting a Compound Annual Growth Rate (CAGR) of 2.5% over the forecast period.

Wheat is widely cultivated for its seed and cereal grain, both of which are staple foods around the world. The genus Triticum includes many Wheat species, the most widely grown of which is common Wheat (Triticum aestivum). Wheat is the most important type of cereal grown in temperate regions, and its grain is crushed to produce flour for products such as bread, pasta, and pastry, among others.

The Global Wheat Market is being driven by the food industry, which is rapidly expanding across all regions as people's disposable income rises, particularly in developing countries. With globalization, the prevalence of processed food has increased faster, driving demand for Wheat. In many areas, the crop is a staple food. The product's growing demand is aided by the rapidly growing population, which increases demand for both Wheat and its starch. Wheat demand is higher among the middle-class population, which has a significant impact on the industry. The growing starch industry is a major driver of the Global Wheat Market.

Wheat starch demand has been increasing steadily for many years, and this trend is expected to continue in the coming years due to the growing popularity of processed foods. Wheat starch is also popular among health-conscious consumers because it is gluten-free and low in calories. The rising demand for personal care products such as dry shampoo, cleansers, and lotions is driving the Wheat starch market, and thus the overall Wheat Market growth. Growing demand for animal feed is also propelling the industry forward. The growing food and beverage industries are driving up demand for processed flour, which is propelling the Wheat Market forward.

Manufacturers are increasing Wheat production in order to meet rising demand. Wheat production is being accelerated by new farming technology and government support. Furthermore, the use of Wheat in the food and beverage industries has increased. Due to increased awareness about the health benefits of organic food, the organically grown Wheat segment is expected to dominate the date market during the forecasted years.

Wheat flour is mostly used in the food & beverage sector to make a variety of items. Over the study period, the Wheat Market is likely to be driven by increased consumption of Wheat in various cuisines and by the processing industries for the manufacturing of products such as flour, pasta, noodles, and beverages, as well as rising food demand. The increasing need for animal feed is also propelling the sector forward. The increasing food and beverage sectors are driving up demand for processed flour, boosting the Wheat Market even higher.

Based on Distribution Channel-

Supermarkets and hypermarkets are the most popular stores selling Wheat flour because they have a wide variety of brands and goods. A supermarket is a self-service store with sections that sell a wide variety of food, beverages, and household supplies. A hypermarket is a retail institution that combines department store and supermarket activities. Hypermarkets, which are often quite big stores, sell a wide range of things such as appliances, apparel, and groceries. This segment has seen massive expansion due to easy availability and many discount offers for the customer.

Asia-Pacific is ranked as the major and fastest-growing Wheat Market. In terms of Wheat production and consumption, China and India dominate the Asia-Pacific region. China was the largest consumer of Wheat in the world and India came in second place. After rice, Wheat is a major staple crop in Asian countries. It is used as flour in the production of bread and flatbread, as well as in the production of noodles and pasta. Wheat consumption in these countries is expected to rise significantly due to rising population and food demand. Wheat is a major staple food crop in Asia and the Pacific. Wheat consumption in the region increased over the study period due to increased consumption of Wheat to produce various products such as flour, pasta, noodles, macaroni, spaghetti, alcoholic beverages, and so on. Asia's population is rapidly growing, and Wheat consumption is expected to rise significantly in the coming years.

Segmentation of the Global Wheat Market:

What is the global demand for Wheat in terms of revenue?