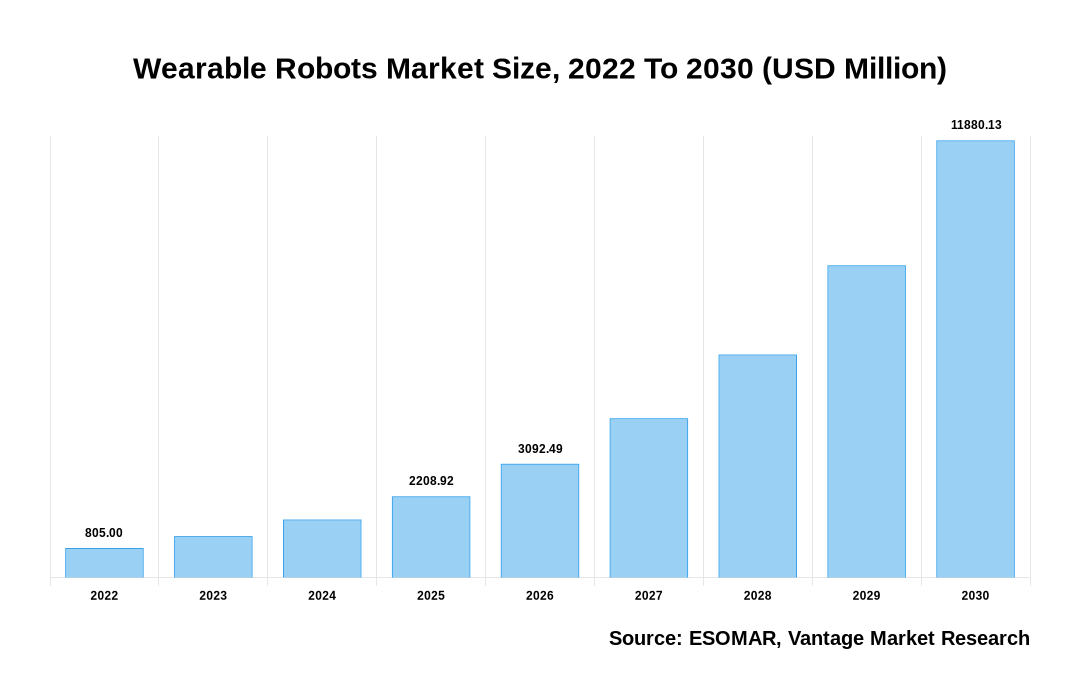 The industry's expansion will be fueled by the world's ageing population. According to the World Health Organization, the global population of people aged 60 and more will increase from 12% in 2015 to roughly 22% in 2050. With increasing age, muscle strength and physical labor capacities deteriorate. The Wearable Robots market will continue to grow as more medical devices are used to support and actuate body movement.

The most common goal of a Wearable Robots is to offer superhuman strength; however, engineers and scientists all around the world are developing Wearable Robots for a variety of uses. Wearable Robots can be used as a multipurpose medical device, as an alternative to wheelchairs, and to boost a patient's independence in daily life, all of which contribute to the market's growth.Initial Wearable Robots development was driven by military and medical applications. The employment of robotic exoskeletons in military applications is also a major factor driving the market's expansion. The human-exoskeleton interface generates a number of concerns.

It will take several years for the Wearable Robots market to realize its full market potential and commercialization. Commercial exoskeleton devices are now heavy and slow, and as a result, they must become more user-friendly. Furthermore, as compared to passive exoskeletons, the cost of powered exoskeletons on the market is extremely expensive. However, because exoskeleton technology is always advancing, it will only be a matter of time before exoskeletons become affordable, user-friendly, and dependable. Manufacturers use a variety of techniques to lower their selling prices, including constantly improving and optimizing their products, performing clinical trials, and extending their sales and distribution networks.

The Global Wearable Robots market is segmented by Type into Powered Exoskeleton and Passive Exoskeleton. By Application into, Healthcare, Military, Industry and Others. Based on Region, the Market is segmented into North America, Europe, Asia Pacific, Latin America and Middle East & Africa.

Asia Pacific is Expected to Experience a Rapid Growth

Over the projected period, the Asia Pacific wearable robots and exoskeletons market is expected to rise at a quicker rate. Wearable robots are used in a variety of industries in the region, including healthcare, industry, and defence. When it comes to exoskeleton wearable development, two countries in the region, Japan and China, stand out from the others. Exoskeletons are seen as a way to minimising occupational injuries and allowing older workers to stay in the workforce for longer in both countries. Exoskeletons are used by senior workers at Tokyo's Haneda Airport to assist them in lifting bags.

The Wearable Robots market is segmented as follows:

What is the global demand for Wearable Robots in terms of revenue?