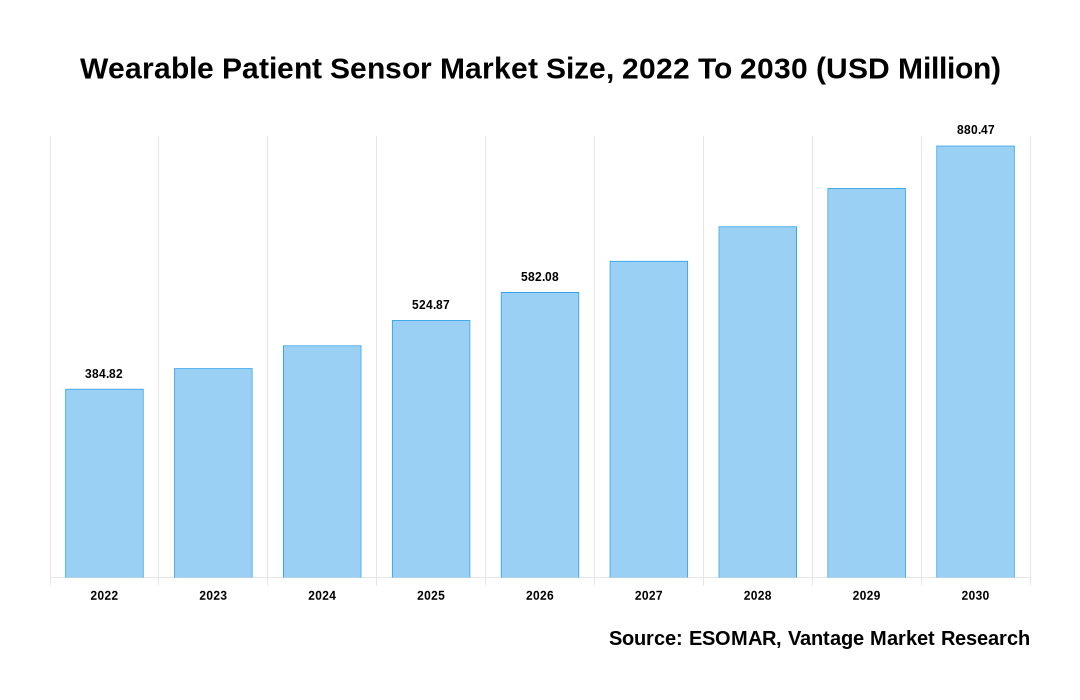 Global Wearable Patient Sensor market is valued at USD 347.2 Million in 2021 and is projected to attain a value of USD 1,392.6 Million by 2028 at a CAGR of 11.2% during the forecast period, 2022–2028. The shrinking of physiological sensors, the rise in demand for enhanced functionality sensors in smart devices, the reduction in battery sizes, and the growing need for continuous monitoring in healthcare services are the primary forces driving the Wearable Patient Sensor market. Activity monitors, fitness gadgets, pedometers, golf and tennis swing analysis tools, and sports kinetics applications are projected to incorporate Wearable Patient Sensor such as accelerometers, gyroscopes, and other motion sensors.

The COVID-19 pandemic has wreaked havoc on many people's lives and companies on a massive scale. Businesses and commercial activity around the world have been severely disrupted by the outbreak. To relieve the load on the healthcare system and reduce disease transmission, various governments throughout the world have issued instructions to postpone or delay non-essential medical and surgical treatments. However, COVID-19 has given impetus growth to the Wearable Patient Sensor market. The Wearable Patient Sensor is a technical gadget that allows people to track data related to their health and fitness. These sensors are embedded in cloth or other fashion accessories and used to diagnose and monitor vital signs such as blood pressure, heart rate, and other metabolic movements using wired or wireless media.

As people become more conscious of the importance of healthcare, smart sensor technologies and monitoring gadgets that can sense and provide feedback to users about their health state are becoming more popular. Because smaller versions of sensors are more versatile and can be placed in a range of devices to obtain real-time information, miniaturisation of health sensors will result in major improvements in their application.

Wearable gadgets, like many other new technologies combined into one system, are experiencing hardware and software performance challenges that may limit their general adoption. Waterproofing is a common user concern, as sweat or washing can introduce damaging moisture into wearable electronics. Furthermore, gadget compactness can result in limited battery reserves or small screens and displays. Some instances of hardware troubles have already been documented in the market; thus, the technical difficulty of hardware and software in wearable devices is a big hurdle for the Wearable Patient Sensor industry's growth.

The Global Wearable Patient Sensor Market can be segmented by Product into Pressure Sensor, Temperature Sensor, Position Sensor, and Other Types. By Application into, Wristwear, Eyewear, Footwear, Neckwear, Bodywear and Other Applications. By End, User into Consumer Goods, Healthcare, Industrial and Other Verticals. Based on Region, the Wearable Patient Sensor Market is segmented into North America, Europe, Asia Pacific, Latin America and Middle East & Africa.

Over the projection period, the North American region is expected to maintain its dominance. The expansion of this segment is due to factors such as a high level of public awareness about the existence of such services. Because of the increasing adoption of digital technology in the United States, the area now has a higher market share. Furthermore, the region's healthcare sector has been booming, which is expected to promote the adoption of Wearable Patient Sensor enabled products during the projection period. Increased prevalence of chronic obstructive pulmonary disease (COPD) and respiratory illnesses, well-established healthcare infrastructure, and the presence of prominent market competitors in the region are some of the factors driving market expansion.

What is the global demand for Wearable Patient Sensor in terms of revenue?