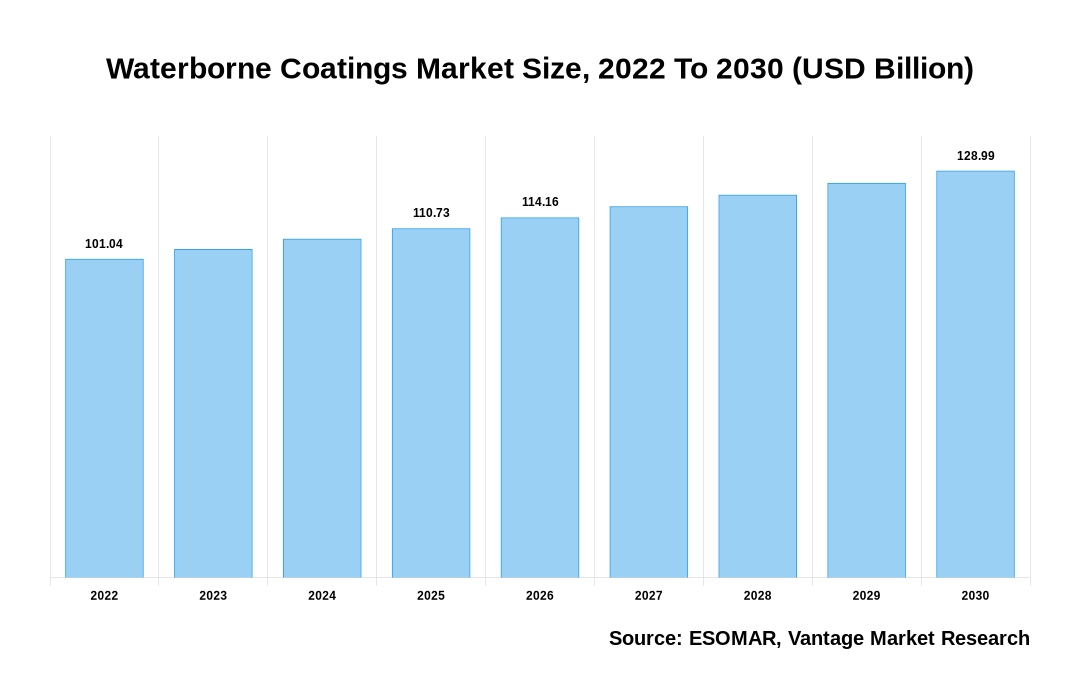 The growth of the Waterborne Coatings Market can be attributed to several factors, such as increasing demand for Waterborne Coatings owing to their various advantages, such as improved wetting, adhesion, and transparency. In addition, the growing health concerns regarding air quality and toxicity propel the growth of the Waterborne Coatings Market. Further, technological advancements are also fuelling the growth of the Waterborne Coatings Market. For instance, developments in three-dimensional printing are facilitating the production of customized coatings in bespoke formats that would not have been possible earlier. Various factors, such as increasing awareness about the benefits of corrosion-resistant paints, increasing spending on infrastructure development, and stringent environmental regulations, are driving the growth of this market. Growing awareness about the importance of coatings for protection against water damage has been a key factor propelling the adoption of these products in various industries such as transportation, manufacturing, shipbuilding, food processing, healthcare facilities, etc. Increasing application in industrial sectors also reflects a growing trend towards smart factories where sensors are installed across various processes to optimize performance and minimize disruptions caused due to product failures or malfunctions. Furthermore, increasing acceptance among customers owing to customization opportunities offered by different manufacturers is also expected to contribute significantly towards the growth of this market.

The growing awareness about environmental hazards and challenges associated with air and water pollution is responsible for boosting investments in renewable energy projects such as solar, wind, hydroelectric, ethanol production, and others. This has increased demand for Waterborne Coatings that reduces oil or gas emissions, corrosion protection, anti-sludge properties, and anti-foaming agents. Incorporating green technology into wastewater treatment plants has also increased demand for these coatings as they help optimize plant performance while reducing the waste production. In addition, an uptick in manufacturing activities across countries such as China and India is anticipated to contribute to the growth of this market during the forecast period. The continuing increase in investments in renewable energy is the anchor for the Waterborne Coatings Market. Expanding solar, wind, and other renewable sources will require many coatings to protect surfaces from degradation. These coatings are being developed for various end-uses such as automotive, construction, and maritime industries. This continuous expansion in renewable is also fueling the growth of green technology companies supplying these new coatings. Reduction in emission pollutant emissions is another factor triggering the growth of the waterborne coating market. Activities like transport, production, and installation greatly affect air quality. Regulations such as COP21 encourage producers to reduce their emissions by replacing polluting processes with cleaner ones. Increased awareness about environmental issues and reduction in cost associated with implementing clean technology is expected to drive the market forward.

In 2021, acrylic resin accounted for 83.4% of market revenue, far exceeding any other product category. Acrylic aqueous coatings are expected to have increased demand from the infrastructure and automotive sectors due to their glossy color retention in outdoor exposure. The use of acrylic resin-based coatings in radiation curing and electrodeposition is expected to increase significantly in the coming years. Polyurethane (PU) coatings will likely see increased demand from the transportation industry because of the rising need for refinishes in aircraft, automobiles, ships, train cars, and trucks. Due to desirable qualities such as resistance to abrasion, hardness, and chemical and weather resistance, they find extensive application. Waterborne Coatings will likely continue to outpace their solvent-borne competitors, largely because of strict government rules for lowering VOC emissions, constant scents, and evolving consumer preferences. Oil-modified, two-component, moisture-curing, and lacquer varieties of polyurethane coatings can all be purchased commercially. Segment expansion is anticipated to be supported by rising demand for PU coating in many different end-use sectors, such as the production of electrical coils and automobiles. Over the projection period, the segment is expected to rise due to rising demand for ultra-low VOC, low-odor epoxy resin-based coatings in the transportation sector, and Do-It-Yourself flooring applications. Strong adhesion and corrosion resistance are just two of the many benefits that epoxy coatings bring to the table when used as primers for metal surfaces. Because of their excellent heat resistance, these coatings find extensive use in electrical insulation. Epoxy coatings are expected to develop with the electrical insulation market, which is expanding quickly.

The architecture segment dominated the market with a more than 60% value share. The major application areas were the coatings for exterior architectural surfaces, including painted or treated wood, metal, plastic, and other materials. The high-end residential space such as luxury villas, gated communities, and high-rise apartments are some of the key consumers of these coatings. The transportation and logistics segment was the second largest market, with a more than 20% share. These coatings are used on rail cars, trucks, and boat hulls to prevent corrosion and improve their appearance. Other important applications include aircraft, ships, and industrial plant water systems. Environmental coatings accounted for over 10% of the overall market in 2021. These coatings protect natural resources from degradation like acid rain, extreme weather conditions such as rainfall, snow, or wind, and pollution. Some notable applications include countermeasures against ozone depletion, water conservation, and promoting marine life protection. More stringent laws on volatile organic compound (VOC) emissions are driving a dramatic growth in the use of Waterborne Coatings, which already make up the majority of the architectural coatings market. Growth in this sector during the next seven years is anticipated to be driven by rising construction spending due to rising incomes in the growing countries of Asia Pacific, Latin America, and the Middle East. In addition, the increasing adoption of acrylic-based coatings in industrial applications is anticipated to fuel industry expansion. Market expansion and profitable new opportunities are anticipated with the introduction of insulation and sound-dampening coatings.

Europe dominated the global industry in 2021 and accounted for the highest share of over 38.1% of the total market value. Asia-Pacific, North America, and the Rest of the World (RoW) collectively followed with a share of about 31.4%. The market is anticipated to grow at a CAGR of about 5.0% during the forecast period. The growth is attributed to increasing demand from key economies in these regions and innovative products launched by leading players. While coatings are widely used in industrial and commercial applications, their application in the transportation and naval sectors has witnessed an alarming increase due to the onset of stringent environmental protection regulations and maritime safety regulations.

Further analysis of geographical segmentation reveals that Europe led the market with a major contribution from Norway, Germany, Russia, the UK, France, and Italy. Germany was identified as the fastest-growing region throughout the study period owing to increasing demand for Waterborne Coatings in the transportation & naval sectors. In Asia-Pacific, India is estimated to be among the fastest-growing countries owing to increasing investments in infrastructure development & industrial initiatives.

● To help professionals satisfy the aesthetic and functional needs of light industrial or commercial settings, Sherwin-Williams developed Pro Industrial Pre-Catalyzed Water-based Urethane, a single-component product with performance qualities equal to those of a two-part coating.

● A memorandum of understanding (MOU) was signed between the Korean firm Hyundai Heavy Industries (HHI) and the Norwegian firm Jotun in June of this year. Together, we can meet environmental laws by using Jotun's innovative maritime paint, which cuts solvent emissions by 90%.

● An environmental coatings and paints industry leader in China, Chenyang Group, established a partnership with Royal DSM in May 2022. With this partnership, we hope to boost the supply of eco-friendly coating options in the Chinese market.

● PPG Industries, a world-renowned manufacturer and distributor of coatings and paints, introduced their aqueous weathering stain, PPG MACHINECOAT, in May 2019. It's a low-VOC alternative to the standard solvent-based PPG Machinecoat alkyd weathering stains.

● Axalta Coating Systems, a global leader in coatings and paints, opened a new coatings manufacturing facility in Gujarat, India, in April 2018. Coatings production will ramp up at this new facility to fulfill the increasing demand.

Waterborne Coatings Market to Reach Valuation of USD 119.3 Billion by 2028 – Environmental Regulation Increasing Demand for VOC-free Coatings Drives the Market
In terms of revenue, the Global Waterborne Coatings Market is expected to reach USD 119.3 Billion by 2028, growing at a CAGR (Compound Annual Growth Rate) of 3.3% from 2022 to 2028. The encouragement of construction activity worldwide is what fuels the rise. Over the projected period, it is antici...
Read More

What is the global demand for Waterborne Coatings in terms of revenue?