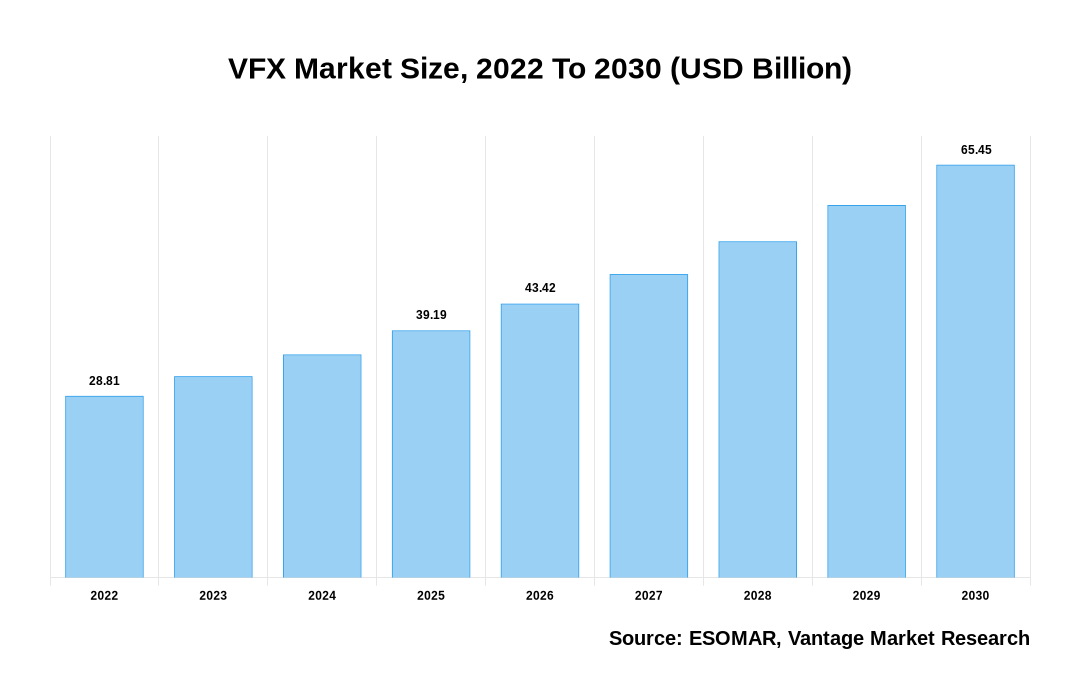 The Global VFX Market was valued at USD 26.3 Billion in 2021 and is expected to reach a value of USD 48.9 Billion by 2028. The Global Market is anticipated to grow exhibiting a Compound Annual Growth Rate (CAGR) of 10.9% over the forecast period.

Visual effects, also known as VFX, are special effects that strongly reflect the visual depiction of the plot and have been used in movies since most of the earliest. Since then, visual effects have been utilized frequently, not simply special effects. For example, films often employed matte paintings to fabricate ceilings that didn't exist on the set. Visual effects are used to create a sight that can't be photographed. Live-action videos and digitally produced images are combined in this procedure to produce realistic sceneries. In addition, CGI-based visual effects are frequently employed in creating video games, advertising, movies, and television shows.

The demand for high-quality (HQ) content by consumers and an increase in the use of visual effects in the film are predicted to propel the expansion of the VFX software industry. In a movie, visual effects technology is essential since it supports the plot and the characters. It helps a filmmaker in effectively completing the complex and expensive portions of the shots. It has grown to be a vital component of the movie business because VFX benefits both the filmmakers and the viewers. The rise in interest in VFX in the media and entertainment sector and financial experts' use of VFX techniques for cost pay are the key factors driving the global effects of visual effects in markets.

The rising demand for high-quality material is another factor boosting the growth of the Global VFX industry. The advent of augmented reality is fuelling the development of the Global VFX industry (AR). For new experiences like augmented reality (AR), there is a growing need for innovation in visual effects. Film production companies include AR in current cameras to detect issues with VFX shoots and post-production. Filmmakers can test scenes using built-in AR cameras to choose the best one. The increased potential of augmented reality in the media and entertainment sectors has led to an increase in the use of AR by visual effects service providers.

The Movie sub-segment dominates the market and is forecast to continue its trend in the upcoming years. The growing popularity of VFX based Movies and the ever-increasing demand from viewers for more realistic movie experiences propels the movie market. With the advent of Virtual Reality (VR) and 3D film, the usage of VFX in filmmaking has given rise to new entertainment experiences. Film production companies use real-time rendering visual effects to create VR films, convey tales, and display visually compelling content. It enables the filmmakers to construct things, animals, settings, and characters that would be highly challenging or nearly impossible to film in the context of live-action images.

Asia Pacific is forecast to grow at the highest Compound Annual Growth Rate (CAGR) during the forecast period (2022-2028). The demand for animation and VFX is expanding, especially in China, due to the increasing consumption of more immersive material over various platforms, including head-mounted devices, tablets, and smartphones with ultra-high resolution as ultra-high-definition TVs. In addition, the education and academic market are anticipated to increase significantly due to this region's curriculum developing several training programs, software, and e-learning platforms that use simulated content and videos. The need for animation and VFX products is being driven, particularly in China, by the rising consumption of increasingly immersive material across various channels, including ultra-high-definition TVs, tablets, smartphones, and head-mounted devices. In addition, several educational institutions want to include simulation technology in their educational systems to give students a more advanced learning environment.

Segmentation of the Global VFX Market:

VFX Market to Reach Valuation of USD 48.9 Billion by 2028 – Superior Quality Content among Consumers Drives the Market
In terms of revenue, the Global VFX Market is expected to reach USD 48.9 Billion by 2028, growing at a Compound Annual Growth Rate (CAGR) of 10.9% from 2022 to 2028. The VFX Market is entirely done in post-production, and in some cases during the film era, the elements are created in the camera i...
Read More

What is the global demand for VFX in terms of revenue?