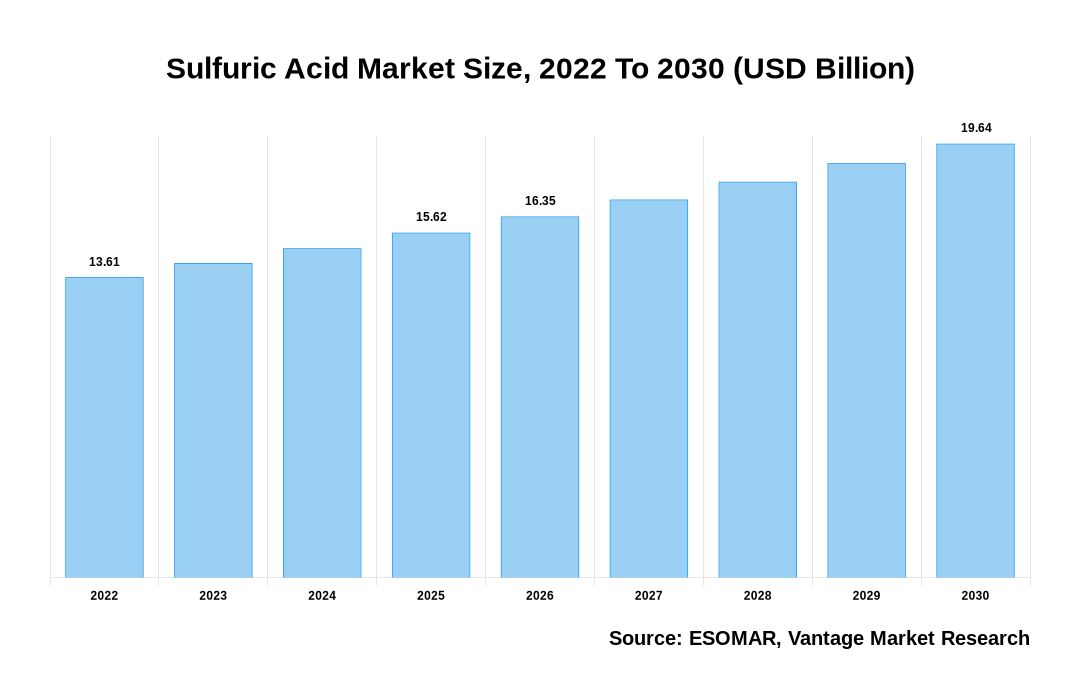 The Global Sulfuric Acid Market was valued at USD 13.0 Billion in 2021 and is projected to reach a value of USD 17.3 Billion by 2028. The Global Market is anticipated to grow to exhibit a CAGR (Compound Annual Growth Rate) of 4.9% over the forecast period.

High production costs: Sulfuric Acid is produced by burning sulfur-containing materials, such as elemental sulfur or sulfide ores. The resulting SO2 gas is combined with water to form Sulfuric Acid. This process is energy intensive and, thus, expensive. Additionally, the raw materials used are often scarce, further heightening costs.

Declining demand from certain end-use industries: Sulfuric Acid is used in various industries, including chemical manufacturing, oil refining, and metal processing. However, demand from these industries has been declining in recent years due to substitution by other chemicals and technological advancements that have reduced the need for Sulfuric Acid.

1. Increasing Demand from Mining Industry: Sulfuric Acid is extensively used in mineral processing activities such as leaching, flotation, and tailing disposal. The growing global mining activities are expected to drive the demand for Sulfuric Acid over the next five years.

2. Growing Oil & Gas Industry: Sulfuric Acid is used in various oil and gas applications such as enhanced oil recovery, pipeline corrosion control, and wastewater treatment. The growing oil & gas industry is expected to fuel the demand for Sulfuric Acid over the forecast period.

Based on Raw Materials

Elemental sulfur will gain the largest market in Sulfuric Acid with the increased utilization of sulfur in producing Sulfuric Acid having fewer pollution characteristics than that of pyrite ores, oil and petroleum refining industries, and base metal smelters. This is because sulfur in Sulfuric Acid is produced from increased sulfur utilization. The expansion of the Sulfuric Acid Market is being driven by the increased quick acceptance of Sulfuric Acid in a variety of industries. Elemental Sulfuric Acid will be the processing material involved in chemical synthesis. The extensive properties of Sulfuric Acid, together with an increase in the manufacture of medications in pharmaceutical sectors, will promote market development. In 2021, the elemental sulfur raw material segment captured a substantial portion of the market, and it is anticipated to make the most rapid progress over the forecast year. The raw material contributes significantly less to environmental damage than pyrite ore or base metal smelters and is widely accessible within the sector. Many businesses have implemented stringent treatment procedures for the sulfur gas discharged into the atmosphere before releasing it. This is being done to limit or reduce environmental pollution. It is anticipated that increasing developmental activities, such as boosting the production capacity of enterprises to improve the manufacturing of Sulfuric Acid products derived from elemental sulfur, will cause the market to expand. Pyrite is produced in the largest quantities in China, the world's leading raw material producer. Most pyrites are used in manufacturing Sulfuric Acid. Compared to elemental sulfur, the mining of pyrites to produce acid products is likely subject to more stringent regulations. This is because pyrites are considered to be less environmentally benign than elemental sulfur. The growth of the pyrite ore raw material segment will probably be slowed down due to these causes.

Chamber/fertilizer acid, also known as oleum, is a highly corrosive and hygroscopic liquid used as a precursor in the manufacture of fertilizers. It is produced by the oxidation of sulfur dioxide in the air. Chamber/fertilizer acid is a colorless to dark brown liquid with a pungent odor. It is soluble in water and insoluble in organic solvents. Chamber/fertilizer acid accounts for the largest share of the Global Sulfuric Acid Market due to its widespread use in the fertilizer industry. The chamber process is widely used to produce Sulfuric Acid for fertilizer manufacturing. In this process, sulfur dioxide gas is passed through an absorption chamber, which reacts with oxygen to form sulfur trioxide gas. This gas is then absorbed in water to form Sulfuric Acid. The main application of chamber/fertilizer acid is as a feedstock for producing phosphate fertilizers such as ammonium phosphate and triple superphosphate. Other applications include its use as a drying agent, Pickling Agent, dehydrating agent, and oxidizing agent.

Based on Manufacturing Process

The Contact Process accounts for the largest share of the Global Sulfuric Acid Market. The Contact process is a major production route for Sulfuric Acid, with over 80% of the world’s Sulfuric Acid being produced. The main feedstock for the contact process is elemental sulfur, which is reacted with oxygen to produce SO2. This SO2 is then further oxidized to form SO3, which is then absorbed in water to produce H2SO4. There are several reasons why the Contact Process dominates the Global Sulfuric Acid Market. Firstly, it is a very versatile process, able to be adapted to different raw materials and operating conditions. Secondly, it is a highly efficient process with a very low environmental impact. Finally, the Contact Process is well-established and has been commercially used for over 100 years.

Based on Distribution Channels

The Global Sulfuric Acid Market is divided into three major segments based on distribution channels: Online, Offline, and Specialty Stores. The Online segment currently dominates the market with a share of over 65%. This is attributed to the growing popularity of e-commerce platforms and consumers' rising preference for online shopping. Moreover, the increased availability of Sulfuric Acid products on online retail platforms has also been driving the growth of this segment. The offline segment comprises supermarkets/hypermarkets, convenience stores, and drug stores. This segment is witnessing moderate growth due to many Offline retailers. Moreover, the easy availability of Sulfuric Acid products at these outlets is also boosting the growth of this segment. The specialty store segment includes retailer outlets selling chemicals and other industrial products. This segment is expected to grow significantly in the coming years due to the increasing number of such specialist stores globally.

Based on the Purity Type

● November of 2021 will see the launch of a new plant at Coromandel International Limited that will produce Sulfuric Acid for use in the fertilization industry.

● In August of 2021, the Sumitomo Chemical Corporation launched a new type of Sulfuric Acid that included greater output and increased purity. This was done in response to increased demand from the semiconductor and automobile industries.

● The market is rather consolidated, and the nature of the competition is intense. DuPont, AkzoNobel N.V., BASF SE, Agrium Inc., PVS Chemical Solution, and Chemtrade Logistics are a few of the companies involved in this industry. Most of the firms are engaged in the production of sulfur and its byproducts, which are then put to use in a wide variety of applications, including producing fertilizers and chemicals, refining petroleum, and other industries that are connected.

● A substantial number of businesses nowadays are largely engaged in mergers, acquisitions, and joint ventures to broaden their product offerings and establish a significant presence in their respective markets. For example, in June of 2016, Veolia acquired the sulfur products division of Chemour to strengthen the company's services in the oil and gas industry for the recycling and treating of industrial waste in the United States. This strengthened Veolia's competitive position in the oil and gas industry.

● In December 2014, BASF entered into a partnership with Zhejiang Jiahua Energy Chemical Industry Co. Ltd., a Huafang Textile Co. Ltd. subsidiary, to construct an electronics-grade Sulfuric Acid plant in China. The plant's purpose is to supply H2SO4 products to the expanding semiconductor industry in this region. Jacobs completed the acquisition of Bayer's Sulfuric Acid converter technology in September 2016.

Sulfuric Acid Market to Reach Valuation of USD 17.3 Billion by 2028 –Increasing Demand for Fertilizers Across the GlobeDrives the Market
In terms of revenue, the Global Sulfuric Acid Market is expected to reach USD 17.3 Billion by 2028, growing at a CAGR (Compound Annual Growth Rate) of 4.9% from 2022 to 2028. The increase in market growth can be ascribed to the strict environmental rules that are in place to restrict emissions, whi...
Read More

What is the global demand for Sulfuric Acid in terms of revenue?