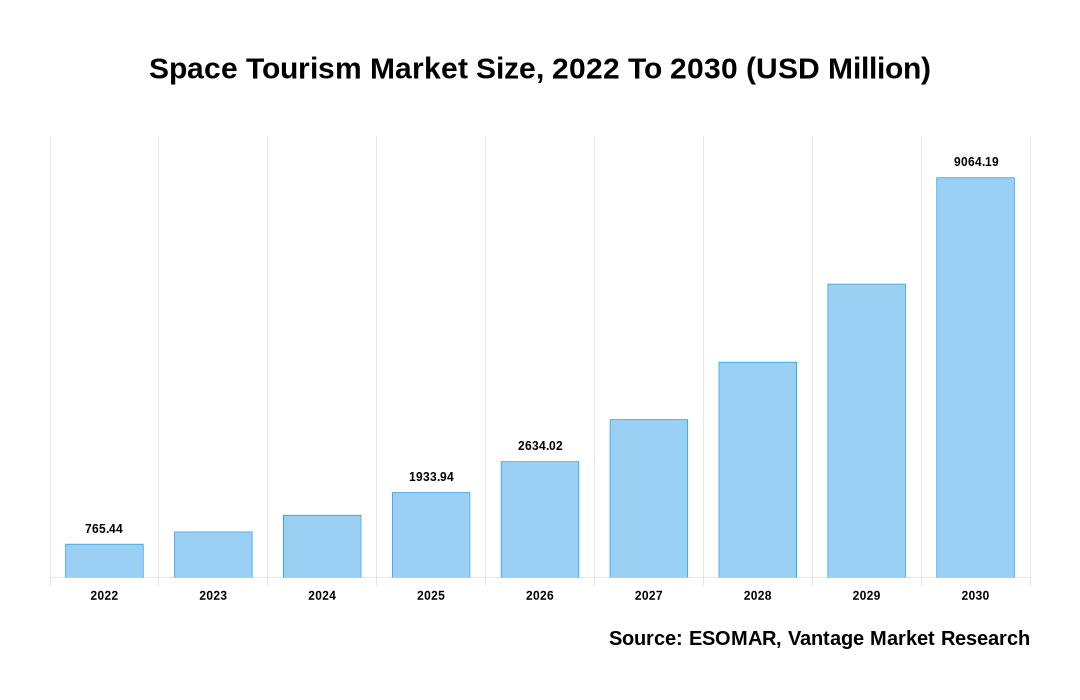 The Global Space Tourism Market was valued at USD 562.5 Million in 2021 and is expected to reach a value of USD 3622.5 Million by 2028. Over the forecast period, the Global Market is anticipated to grow to exhibit a Compound Annual Growth Rate (CAGR) of 36.4%.

Traveling into space for leisure and entertainment is known as Space Tourism. Tourism in orbital, suborbital, and lunar space falls under this category. Initially, only astronauts, who underwent extensive training, were sent on space missions; however, as time passed, the trend shifted to make Space Tourism seem like a leisure activity. Additionally, the rapid advancement of technology has made it possible for even unskilled individuals to go outside the solar system. To carry out these tourism missions and improve the visitor experience, the key market participants in the Global Space Tourism sector have invested enormous sums of money. It is anticipated that rising travel and tourist costs will increase demand for Space Tourism as a whole throughout the projected period. Therefore, the industry for Space Tourism is expected to grow due to rising investments.

Additionally, it is anticipated that individuals interested in enhanced space exploration will continue to create new potential for the Space Tourism industry during the projection period.

On the other hand, the high involvement costs in the Space Tourism are expected to restrain the market's growth. At the same time, risks like a lack of proper regulation and insufficient safety protocols are likely to make it difficult for the market to expand. Moreover, space tourists are likely exposed to the sun's harmful radiation.

The Sub-Orbital category dominated the market in 2021 and is expected to continue its dominance in the Type segment of the Global Space Tourism Market. Using Sub-Orbital tourism, human spaceflight can reach the edge of the Earth's orbit without exiting it. In this travel, the voyagers can observe space without leaving the Earth's orbit. In addition, they can feel a natural weightlessness feeling by experiencing space travel in the Sub-Orbital category. On the other hand, the Orbital segment too will see the fastest Compound Annual Growth Rate (CAGR) throughout the projected period. Depending on the destination, such as the International Space Station (ISS), the moon, or Mars, an orbital voyage may span a few days or weeks. While SpaceX and Orion Span strive for orbital flights, companies like Virgin Galactic and Blue Origin primarily focus on launching suborbital missions.

Based on End Users:

The Commercial category segment dominated the market in 2021 and continues to dominate as it is anticipated that the Commercial space travel market will rule. Seven commercial spaceflight flights launched in 2021 by various private and governmental entities were successful. Billionaires have spent a lot of money going to space to view the Earth from above. Spaceflight missions have been launched by Virgin Galactic, SpaceX, Blue Origin, and NASA to carry non-astronauts across the universe and return them to Earth after a certain amount of time. The first feature film shot in space and the oldest person to travel to space are just two of the milestones that these explorations have accomplished.

The Asia Pacific is anticipated to grow exponentially and will account for the highest Compound Annual Growth Rate (CAGR) during the forecast period. The China National Space Administration (CNSA), the Japan Aerospace Exploration Agency (JAXA), and the Indian Space Research Organization (ISRO) are significant contributors to the expansion of the Asia-Pacific market. In addition, CAS Space has been creating rockets for commercial satellite launches. CAS Space is the Chinese Academy of Sciences (CAS) spinoff. By 2024, the business hopes to fly travelers into space after a full suborbital flight in 2023 and a demo trip in 2022. According to a Chinese University of Hong Kong survey, young Chinese respondents showed far more interest in space travel and accommodations than American respondents.

What is the global demand for Space Tourism in terms of revenue?