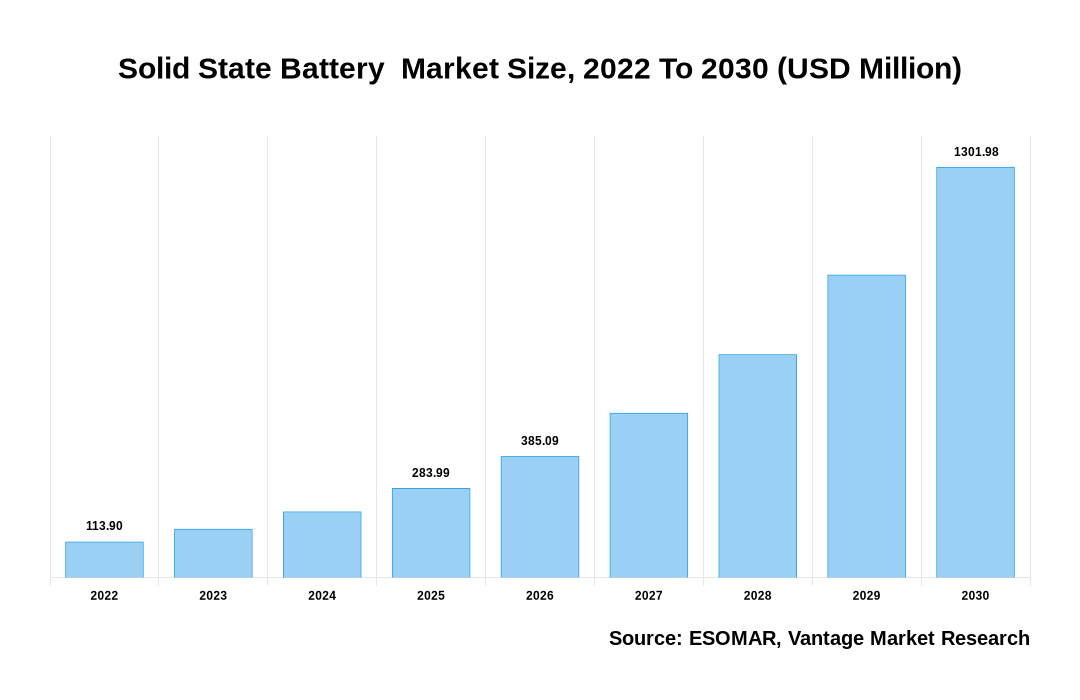 Global Solid State Battery market is valued at USD 84.26.02 Million in 2021 and is projected to attain a value of USD 721.35 Million by 2028 at a CAGR of 35.9% during the forecast period, 2022–2028. Solid State Battery has caught the attention of consumers in the last decade. Solid State Battery shows great potential for high energy storage capacity with its large surface area and higher ionic conductivity compared to that of liquid electrolyte counterpart. Some of the major factors that are driving this market are rise in demand for electric vehicles (EVs), growing use of renewable energy storage, need for better performing batteries etc. Factors such as lengthy charging time and lack of enough charging stations have been hindering the growth of consumer electronic devices industry.

Global market has been witnessing a considerable increase in the demand for flexible, lightweight and high-performance batteries that can be charged quickly with less waiting time. Also, increase in price per kWh for power generated from fossil fuel sources is also one reason behind rapid development in this field. Furthermore, with increasing middle-class population around the world there has been a changing trend among consumers where they prefer EVs over conventional gasoline and diesel-based vehicles and the decreased size and increased efficiency of solid-state batteries has positively impacted this trend.

Solid State Battery finds its applications in consumer electronic devices, EVs and power grid storage where they can replace conventional wet cell battery and fuel cells due to their high energy density, good safety profile, longer life cycle etc. One such application is found in wearables whereas technology functions more efficiently solid-state batteries also come with improved form factor which makes them suitable for wearable devices such as smartwatches.

The demand for Solid State Battery , which is high in energy density and superior to lithium ion batteries, has been increasing because it can be used in electric vehicles (EVs). Since the US and China announced that they will put an end to using gasoline cars by 2030 and 2040 respectively, it boosted the global market for single cell Solid State Battery . A shift of attention was seen from materials to devices of solid-state battery after 2015 when Tesla developed the commercial scale of the product. The potential size of the market is huge because several companies are newly investing into it.

It seems that there is a possibility that all of EVs on streets are likely to operate with single cell Solid State Battery by 2030 if pre-commercialization process goes smoothly considering 'time-to-market' and 'cost'.

The demand for solid state batteries used in medical devices such as pace makers and defibrillators has increased over the last several years. Batteries are required to provide the power necessary to operate medical devices such as pacemakers and defibrillators which are implanted in the body to help regulate patients heart function. Solid state batteries offer longer life, greater reliability, lower weight compared with conventional sealed lead acid (SLA) batteries used for this application, which makes the ideal choice among other available alternatives.

Over the past few years, the price of traditional consumer electronics has been decreasing. In order to capture attention of consumers, device manufacturers continuously pursue improvement of product performance and need Solid State Battery as a energy storage solution. Asia-Pacific region is the fastest growing market for solid state batteries due to rapidly increasing penetration rate of smartphones and other related devices. Moreover, it is one of top two regions with fast adoption rate of smartphone, tablet computers and medical devices. This trend will lead to increase demand from Solid State Battery market in Asia Pacific.

The Solid State Battery is Segmented as Follows:

Solid State Battery Market Expected to Reach USD 721.35 Million by 2028
According to our latest report, the Solid-State Battery Market is expected to reach USD 721.35 Million by 2028, growing at a CAGR of 35.9% between 2022 and 2028. The Increase in usage of solid-state batteries in wearable devices, drones, and healthcare sectors is anticipated to drive the growth of s...
Read More

What is the global demand for Solid State Battery in terms of revenue?