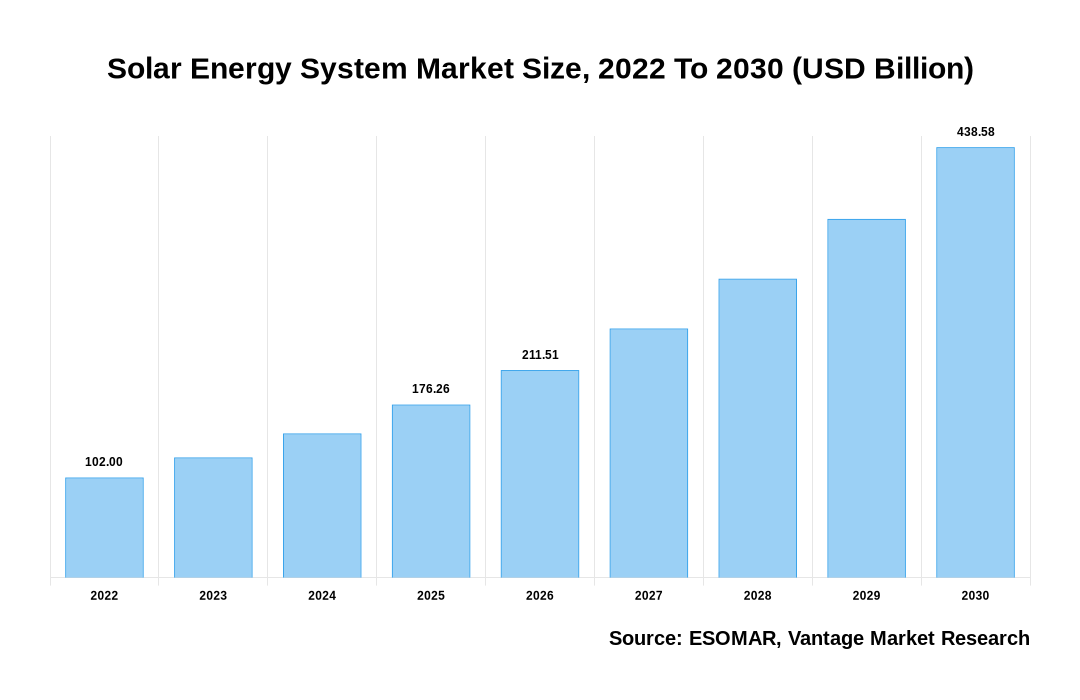 The Global Solar Energy System Market was valued at USD 85.1 Billion in the year 2021 and is forecast to reach a value of USD 255.3 Billion by the year 2028. The Global Market is anticipated to grow to exhibit a Compound Annual Growth Rate (CAGR) of 20.1% over the forecast period.

Solar energy is the radiant energy that the sun emits; it is captured using various methods, including photovoltaic cells, solar heating, and others. It is a valuable renewable energy source that effectively addresses rising greenhouse gas emissions and global warming. Increased environmental degradation and the availability of government incentives and tax breaks for solar panel installation are the main factors driving the market for solar energy. Many businesses are building renewable energy facilities as a result of environmental laws. Several nations are concentrating on eco-friendly power generation techniques to lower their carbon emissions. One of the affordable options for sustainable energy is solar power. As a result, many countries are making significant investments in solar energy.

Large solar projects need a lot of areas, such as utility-scale or large industrial-scale plants. Additionally, any considerations like the availability of solar radiation limit the choice of land. Due to the inaccessibility and instability of the terrain, installing solar installations in agricultural or forested areas presents challenges. Distance from the power grid and equipment transportation is other considerations influencing where to build. Additionally, solar energy systems' reduced water footprint has increased demand for them in the electricity-producing sectors. Due to an increase in rooftop installations and subsequent growth in applications in the architecture industry, the need for solar cells has significantly increased.

On the basis of Technology, Photovoltaic Systems and concentrated solar power systems are the two segments of the worldwide solar energy market (CSP). In addition, mono-si, thin-film, multi-si, and other solar PV systems are further classified; the parabolic trough, power tower, and linear Fresnel are categories under CSP. In the past, the solar PV segment dominated the global market.

On the basis of Application, the Commercial solar PV panels can power industrial facilities in off-grid or remote regions, pre-heat ventilation air, and heat water in offices, enterprises, and other structures. These panels have a short lifespan. The commercial sector expects product demand to be driven by the quick adoption of PV modules in corporate offices, hotels, and hospitals and the rising demand for power in data centers and communication base stations.

Asia Pacific is accounted to grow at the fastest CAGR during the forecast period. As a result, the largest solar power market by market share was in the Asia Pacific. More than half of the world's population resides in Asia and the Pacific, creating a sizable consumer base. China, Japan, and India are the top three nations that use solar energy the most. Some of the essential macroeconomic drivers driving the growth of the solar power market in the Asia Pacific are growing urbanization, rising disposable income, busy lifestyles, rising internet penetration, and rising smartphone adoption. Additionally, the industry is supported by a sizable youth population and an increased desire for sustainable development and renewable energy. Owing to the region's robust economic expansion, nations like China and India offer market players great growth opportunities.

Solar Energy System Market to Reach Valuation of USD 255.3 Billion by 2028 – Increasing Initiatives in the Development of Solar Energy Drives the Market
In terms of revenue, the Global Solar Energy System Market is expected to reach USD 255.3 Billion by 2028, growing at a Compound Annual Growth Rate (CAGR) of 20.1% from 2022 to 2028. Growing investments in solar energy and supportive government initiatives and policies are anticipated to augment the...
Read More

What is the global demand for Solar Energy System in terms of revenue?