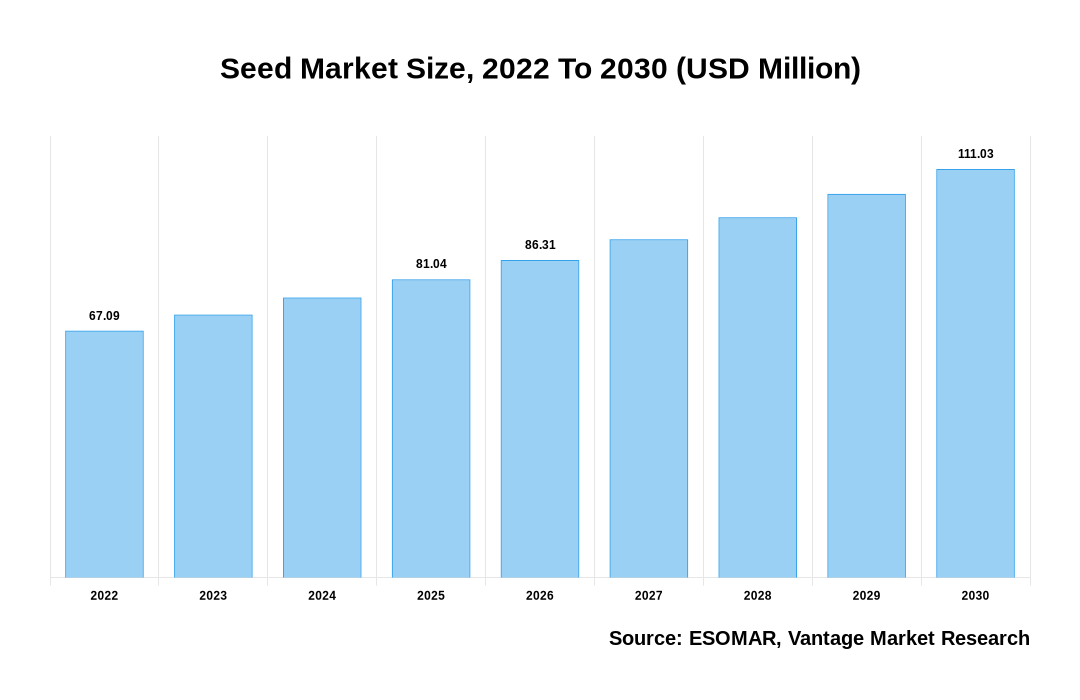 Global Seed Market is valued at 63.50 USD Million in 2021 and estimated to reach a value of 100.64 USD Million by 2028 at a Compound Annual Growth Rate (CAGR) of 6.60% during the forecast period, 2022–2028. The market is expanding because to rising demand for seeds from the food, beverage, animal feed, and biofuels industries. Seed demand has been steadily increasing in nations like China and India. Because these countries have the world's greatest populations, an ever-increasing need for food grains fuels the seeds market's expansion. Farmers in developed markets are attempting to preserve agricultural yields while increasing their profits. The worldwide seeds industry has grown as a result of developed and emerging nations' consistent approaches to agricultural methods.

By Trait, Herbicide to Hold Prominent Share of Seed Market

The market for crops with additional characteristics is rapidly expanding. The increased acceptance of crops with various characteristics has resulted in a reduction in the use of herbicides and insecticides, lowering cultivation costs. Seeds with stacking qualities are available from companies like Syngenta Group (Switzerland) through its commercial brand, Agrisure. The company's research and development efforts are focused on the creation of novel molecular stacks that will allow hybrids to have three or more features. Farmers would be able to get larger yields and greater resistance to pesticides and herbicides in this manner.

During the projection period, the cereals and grains category is expected to have the biggest Seed Market share. Because grains are widely used as a staple diet in many Asian and Southeast Asian nations. Countries like China have emerged as big grain exporters in recent years to suit the needs of surrounding economies. Corn, for example, is widely used in both the food and feed industries. With the growing need for biofuels, crops like sorghum are being grown in massive quantities. The global demand for fruits and vegetable seeds is being driven by a growing awareness of the need of eating a protein- and vitamin-rich diet.

Asia Pacific is the Largest Consumer of Seed Market

The Asia-Pacific region dominates the Global Seed Industry since it is home to two of the world's most important agricultural countries, India and China. In the worldwide Seed Market, Asia-Pacific is also the fastest-growing geographical category. In major commodities including rice, maize, and vegetables, the area is seeing growing hybrid adoption and rising seed replacement rates. Hybrid rice's prospects in the region remain bright. China is a big rice grower in the world. It began selling rice seeds to other countries in recent years. For example, it delivered 500 metric tonnes of hybrid rice seeds to Pakistan from a seed firm in east China's Jiangsu region in 2020 to enhance Pakistan's grain productivity. A total of 33,333 hectares of land is anticipated to be planted.

Seed industry promotion policies are on the rise. Some provinces are considering to set up new Seed manufacturers based on local resources and economy. The market's major players are rapidly increasing their geographic and product range footprints. For example, in addition to the October 2017 deal, BASF negotiated an agreement in 2018 to buy other companies and assets that Bayer had promised to sell as part of its planned acquisition of Monsanto. Bayer's whole vegetable seed business is now covered under the Nunhems worldwide trademark.

Seed Market is segmented as follows:

Seed Market is tabulated as follows:

What is the global demand for Seed in terms of revenue?