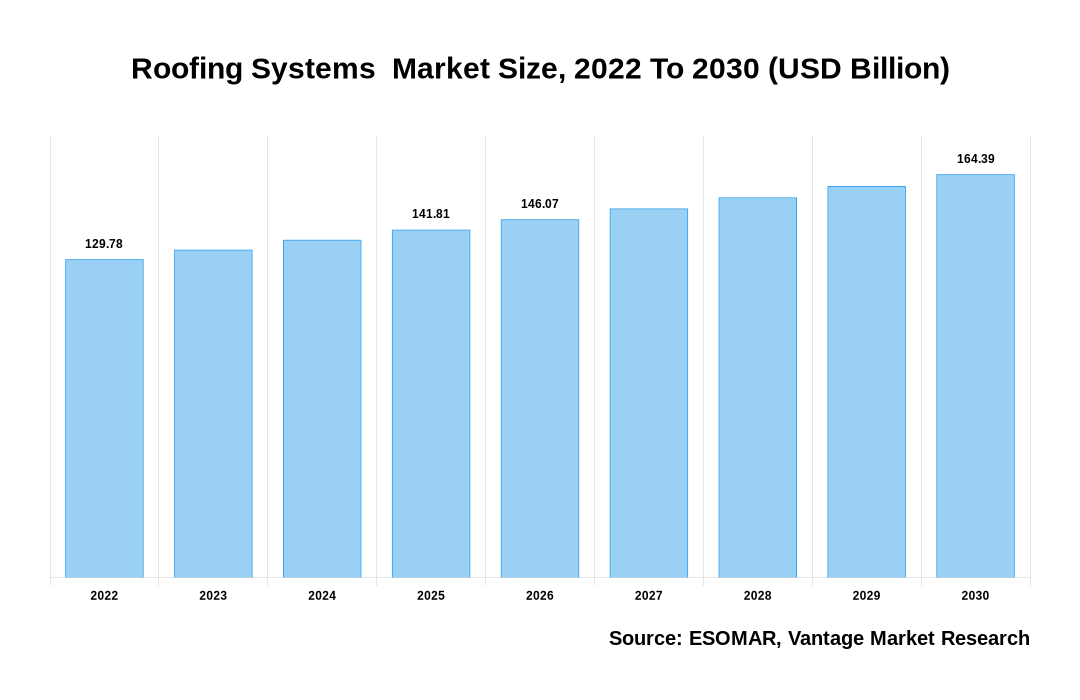 Global Roofing Systems market is valued At USD 126.98 Billion in 2021 and is projected to attain a value of USD 157.23 Billion by 2028 at a CAGR of 3.1% during the forecast period, 2022–2028. The growing demand for roofing is good news for the construction industry. According to the US Census Bureau, total housing starts have increased by an average of 18 percent per year during 2010-2018. Roofing material demand has also seen strong growth, increasing 23 percent during that same period. As more people are moving into new homes and older homes are being refurbished or remodeled, old roofs must be replaced with new ones. As a result, the global roofing system market is witnessing considerable growth in the demand.

Roofing system manufacturers are focusing on developing attractive designs that can be used in different types of architectures. The demand for green roofs made from plastic and concrete is increasing due to their ability to lower the building’s carbon footprint while adding value to it by providing insulation from heat or cold. Improved aesthetics have also made them preferred option among homeowners when it comes to choosing green roofs. Furthermore, new materials are being developed using advanced technologies such as 3D printing that can potentially increase demand for Roofing Systems in the near future.

Bituminous roofing is a type of construction material that provides a protective, weatherproof and watertight cover to buildings. Bitumen is a mixture of organic liquids that are extracted from the Earth’s subsurface by drilling wells. Due to its high flash-point and insulating properties, bitumen has been used for roofing since ancient times. In contemporary times, most roofs are covered with asphalt shingles made from refined bitumen.

Roofing Systems play a vital role in reducing energy consumption by buildings across the world. By repairing cracks in roofs made of bitumen, the energy efficiency of buildings increases. This helps reduce carbon footprints by lowering power consumption resulting in considerable growth of the roofing system market over the coming years. Some of the key factors driving demand for the products are increasing demand for green roofs, growing need for energy efficient buildings and new materials developed by manufacturers using 3D printing technologies. However, environmental concerns related to disposal of bituminous material may pose challenges for these companies in future

By Application, Industrial Segment to Hold largest Share of the Roofing System Market

Industrial users are the largest consumer of Roofing Systems across the world. Governments across North America, Europe and Asia are favoring the construction of new infrastructure projects that will increase demand for bituminous roofs in these regions. Roofing system manufacturers have also been working closely with architects to develop sustainable designs that can serve as an alternative to traditional roofs made from asphalt shingles. This is expected to increase demand for metal roofs over the next few years. The market is growing at a considerable rate in developing countries due to increasing focus towards developing cities equipped with modern infrastructures. Growing trend towards dhoop batti roofing among Indian consumers is further expected to boost product demand over the coming years

Rapidly expanding construction industry is one of the most significant factors driving growth of the roofing system market. According to the United Nations, more than half of all new housing units are being built in Asia-Pacific. China alone accounts for over 20 percent of global construction projects. The Middle East also presents a lucrative market for construction firms because of its high economic growth and ambitious infrastructure development program. Construction activity in North America and Europe is also growing at a healthy pace, which has given rise to an improved demand for Roofing Systems across this region. Middle East, Africa and Latin America have experienced robust growth in recent years due to urbanization and industrialization. Economic growth in these regions has led to increased government spending on construction of roads, buildings, bridges and other infrastructure projects. This, in turn, is increasing demand for Roofing Systems across Africa and Latin America.

The Roofing Systems is Segmented as Follows:

What is the global demand for Roofing Systems in terms of revenue?