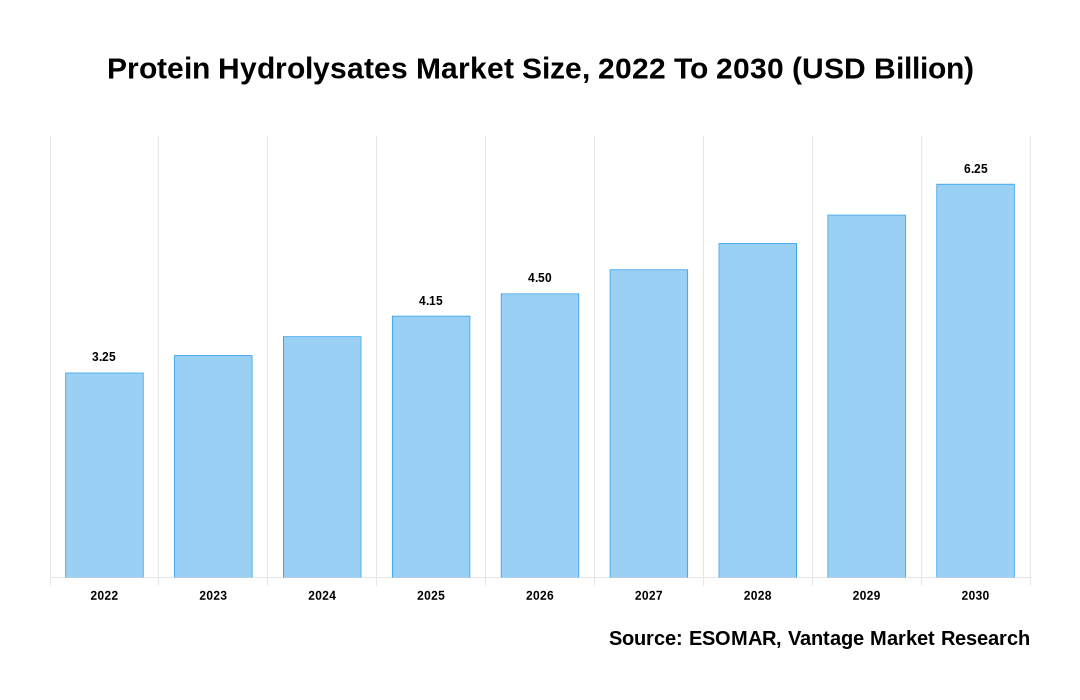 Protein Hydrolysates have been commercialized as nutritional supplements and flavors. In addition, they have been used in cosmetics and pharmaceuticals. The uses of Protein Hydrolysates have been increasing exponentially year by year. This is because the consumers' growing desire to eat healthy food with high nutritional value and a simultaneous decrease in meat consumption has stimulated the demand for functional foods with high nutritional content. Functional soy proteins are one of the major types of Protein Hydrolysates that have gained significant attention from both producers and consumers due to their commercial destination as well as health benefits. In fact, it is considered the most important group of functional plant proteins worldwide.

Growing concerns about animal health and environmental issues have led to a ban on using animal proteins in food products. This has increased manufacturers' usage of plant-based ingredients such as vegetable proteins and their derivatives such as soy protein isolates, soy flour, texturized soy protein (TSP), autolyzed yeast extracts, corn gluten meal, wheat gluten proteins etc., which is further expected to fuel the Protein Hydrolysates market during the forecast period. Additionally, rising disposable income in developing countries is expected to boost demand for processed food supported by rising health and wellness concerns among the population. The market is further driven by factors such as increasing preference for vegetarian diets, adoption of vegan or plant-based diets owing to animal welfare issues, growing geriatric population base due to increased life expectancy rates, large pool of young working population with high purchasing capacity etc.

The growing demand for animal Protein Hydrolysates is a key factor stimulating the market. Animal proteins have several benefits over plant-based proteins, including better amino acid profile and superior solubility in hot or cold water. This, in turn, makes these products more compatible with various other food ingredients such as thickeners, stabilizers, gelling agents, emulsifiers and other substances. In addition to this, animal proteins can be used to make lactose-free dairy products by removing peptides responsible for milk’s bitter taste. The demand for animal Protein Hydrolysates is likely to increase further due to increasing studies on the health benefits of using them in human nutrition. For instance, nearly half of US adults face anemia-related health problems, according to the CDC (Centers for Disease Control and Prevention). Animal proteins contain high levels of iron, which significantly reduces this risk.

North America holds second leading position. Nutritionists at Jean Mayer USDA Human Nutrition Research Center on Aging at Tufts University reported that the North America is the largest consumer of Protein Hydrolysates. They also revealed that about 5% of all milk produced in North America was used to produce these beverages. This percentage only accounts for beverages that are commercially available and does not include drinks made from home recipes.

The Protein Hydrolysates is Segmented as Follows:

What is the global demand for Protein Hydrolysates in terms of revenue?