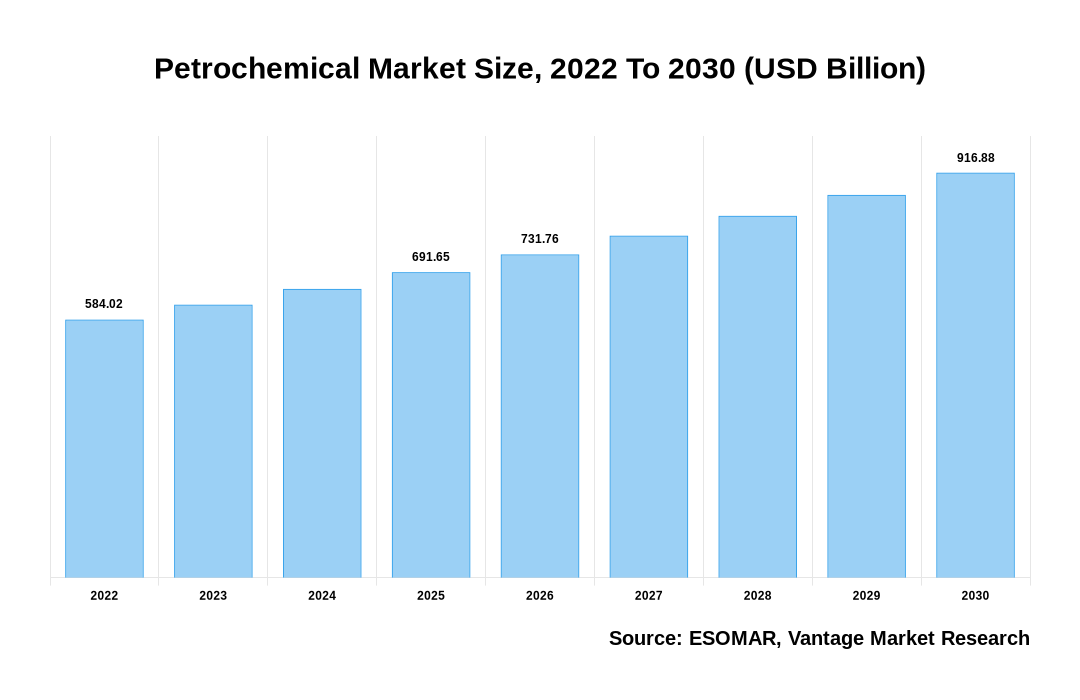 The Global Petrochemical Market was valued at USD 552.3 Billion in 2021 and is projected to reach a value of USD 779.0 Billion by 2028. The Global Market is anticipated to grow to exhibit a CAGR (Compound Annual Growth Rate) of 5.9% over the forecast period.

The Petrochemical industry is driven by several factors, including the availability of feedstock, changes in global demand, geopolitical factors, and technological developments. The type and quality of crude oil and natural gas available for refining into Petrochemical feedstock products like ethane, propane, butane, and benzene can influence the costs and margin potential for Petrochemical manufacturers. For example, a change in the availability of light crude oils may impact the ability to produce lighter olefins like ethylene which are used as feedstock for making plastics. Changes in global economic conditions can also lead to changes in demand for Petrochemicals used in manufacturing processes or final consumer products. Political stability and predictability are important considerations for companies making long-term investment decisions in the Petrochemical industry. Instability in key producing regions can lead to disruptions in supply while changing government policies can create regulatory uncertainty. In addition, trade disputes can impact the flow of Petrochemicals around the globe and affect the competitiveness of different producers.

The Petrochemical industry constantly evolves as new technologies are developed to improve process efficiency and product quality. For example, advancements in catalytic cracking technology have allowed refiners to produce more valuable chemicals from lower-quality feedstocks, while new polymerization processes have led to the development of new plastics with improved properties. Various factors also drive this growth, including the increasing global demand for energy, the growing transportation sector, and the expanding middle class in developing countries. The global demand for energy demand is expected to increase significantly in the coming years. This is due to population growth, economic development, and increased use of energy-intensive technologies. The Petrochemical industry is poised to benefit from this increased demand, as it is a major producer of energy products. According to the United Nations, the world's population is projected to grow to 9.8 billion by 2050. This growth will result in increased demand for energy, as more people will need to be powered and supported. Additionally, economic development will lead to higher energy consumption as businesses expand and consumers purchase more goods and services. Finally, energy-intensive technologies are expected to rise in the coming years. This includes everything from electric vehicles to cryptocurrency mining operations. As these technologies become more prevalent, they will drive up global energy demand even further. The market is driven by the increasing demand for plastics and other Petrochemical-based products. The Asia-Pacific region is the largest market for Petrochemicals, followed by North America and Europe.

The transportation sector is a key driver of the Petrochemical Market. The sector consists of automobiles, light trucks, buses, and railroads. The transportation industry utilizes approximately twenty percent of the world's petroleum. It is anticipated that the number of automobiles on the road will increase dramatically in the future years. The expansion of car ownership is driven by economic growth and population expansion. As saturation levels are reached in industrialized nations, it is anticipated that vehicle fleet growth will slow down. In contrast, car ownership is anticipated to increase rapidly in developing nations. China and India are expected to contribute significantly to this increase. The shift from passenger vehicles to light trucks is a further factor driving expansion in the transportation sector. Light trucks consist of SUVs, pickup trucks, and vans. They are more fuel-efficient and release fewer greenhouse gases than passenger vehicles. The shift to light vehicles is driven by consumer preferences and government laws. The transportation sector is a critical driver of the Petrochemical Market. The sector is expected to grow significantly in the coming years due to economic development and population growth. Shifting from passenger cars to light trucks will also contribute to market growth. The energy demand will also increase as the world economy continues to grow. This will lead to higher demand for petroleum and other fossil fuels, which will drive up the price of Petrochemicals.

The growth of the Petrochemical Market is being restrained by various factors. One key factor is the fluctuating prices of crude oil. Crude oil is a major raw material used in producing Petrochemicals, and its prices have been volatile in recent years. This has made it difficult for Petrochemical producers to plan and budget for their operations and has led to some slowdown in the growth of the market. Another key restraint on the market is increasing environmental regulations. Many governments are imposing stricter regulations on the use and emission of Petrochemicals, to protect air quality and reduce greenhouse gas emissions. This leads to higher costs for producers and restrains the market’s growth. Finally, another factor restraining market growth is rising competition from alternative materials. With technological advances, more options are available for consumers regarding products made from Petrochemicals. This increased competition is putting pressure on prices and margins and resulting in slower market growth overall.

· Asia is now the largest Petrochemical Market, accounting for over half of global demand. This trend is driven by the region's strong economic growth, which is driving demand for a wide range of Petrochemical products.

· The continued growth of the automotive sector. The automotive industry is a major consumer of Petrochemicals, and demand is expected to grow as the sector expands.

· The emergence of new applications for Petrochemicals. Petrochemicals are increasingly being used in a wider range of industries, including construction, electronics, and healthcare.

· The development of new technologies. Technology advances enable the Petrochemical industry to develop new products and processes. For example, 3D printing is used to create new plastics and composites.

· The increasing focus on sustainability. Sustainability is becoming increasingly important for the Petrochemical industry as companies seek to reduce their environmental impact.

The Global Petrochemical Market is broadly segmented by Product Types, Applications, and Region. By Product Type, the market is further classified into Ethylene, Propylene, Butadiene, Benzene, Toluene, and Xylene. By Application, the market is divided into Plastics, Fibers, Rubber, Solvents, and Others. Geographically, the market is analyzed across North America, Europe, Asia Pacific, and LAMEA.

Based on Product Type

The Plastics segment held the largest share of the market in 2021. This is attributed to the wide range of applications of plastics in various industries such as packaging, construction, automotive, and electronics. Plastics are also used in various consumer goods such as toys, appliances, and utensils. On account of their cost-effectiveness and sturdiness, it is anticipated that the demand for plastics will continue to increase at a high rate over the next years. The Chemicals market sector maintained the second-greatest market share. Several industries, including medicines, cosmetics, food & beverage, and agriculture, utilize chemicals extensively. The increasing population and income levels are driving the need for these materials, which are utilized in the production of a variety of consumer goods. Due to the increased demand for these goods from the automotive industry, the transportation fuels category is likely to have considerable expansion throughout the forecast period. The automotive industry is one of the largest consumers of gasoline and diesel. Over the next few years, the demand for transportation fuels is anticipated to be driven by the rising global sales of automobiles. The research also covers solvents, lubricants, insecticides, fertilizers, adhesives & sealants, rubber processing chemicals, dyes & pigments, and other areas.

● The National Petrochemical Co. was purchased by the Saudi Industrial Investment Group in September 2021, creating one of the leading chemical producers in the Middle East at a time when prices were skyrocketing. The merger, which was conducted through an all-share transaction, combined two companies with a market valuation of US$ 11.2 Bn. It follows a trend of increasing consolidation among Saudi Arabia's industrial corporations, which are trying to gain scale and boost profits.

● Adnoc decided in April 2022 to acquire Mubadala Investment Company's 25% share in Borealis, an Austrian chemical manufacturer. The transaction would likely help the state-owned oil and gas company increase its presence in the chemical and Petrochemical industries. Austrian oil, gas, and Petrochemical conglomerate OMV would own the remaining 75% of Borealis.

Segmentation of the Global Petrochemical Market

Petrochemical Market to Reach Valuation of USD 779.0 Billion by 2028 – Growth in Plastic Consumption in Developing Nations Drives the Market
In terms of revenue, the Global Petrochemical Market is expected to reach USD 779.0 Billion by 2028, growing at a CAGR (Compound Annual Growth Rate) of 5.9% from 2022 to 2028. Growth in demand for downstream products from several end-user industries, including the construction, pharmaceutical, and ...
Read More

What is the global demand for Petrochemical in terms of revenue?