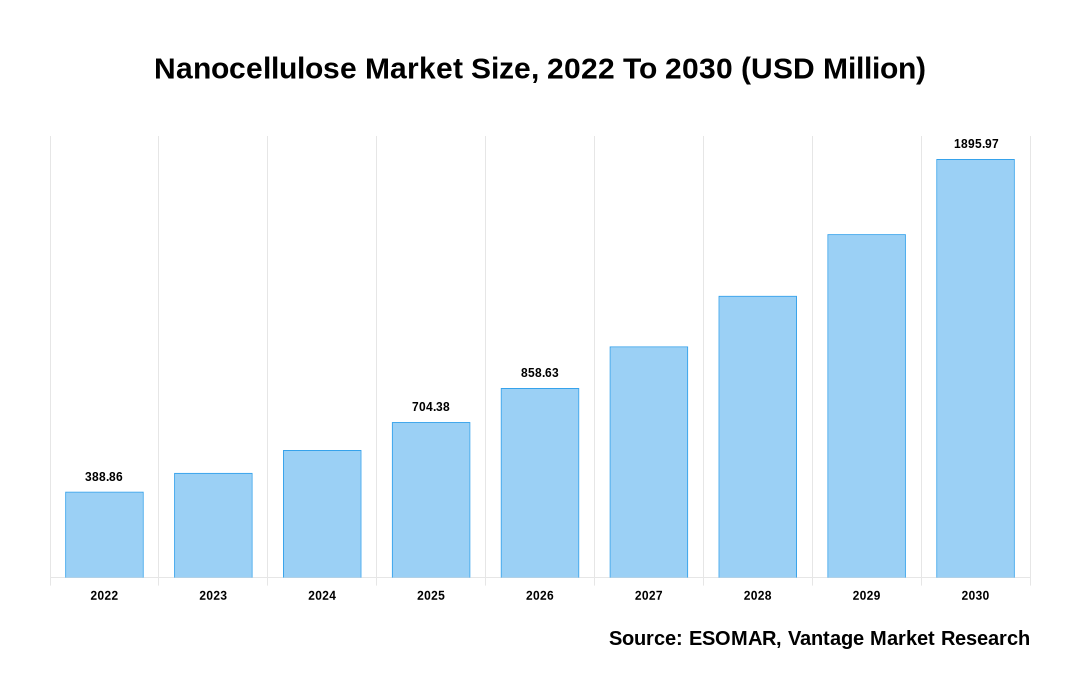 Nanocellulose is an increasingly popular material for various products, from health food supplements to clothing and other consumer goods. Nanocellulose represents a new frontier in materials science, with potential applications in various industries. One key factor driving the Nanocellulose market is increasing awareness of the material's potential benefits. For example, Nanocellulose is often touted as a healthy alternative to traditional materials like paper and cotton. Nanocellulose is a unique material characterized by its small size (ranging from 10 to 100 nanometers) and its great number of individual cellulose molecules. Nanocellulose possesses many potential benefits, including enhanced performance and reduced energy consumption in numerous devices and applications. Nanocellulose is a highly versatile, durable, and environmentally friendly material that has the potential to address a variety of challenges faced by manufacturers and consumers. Currently, Nanocellulose occupies a small but growing niche in the market, owing to its lack of widespread awareness. However, numerous benefits associated with its use will likely stimulate growth over the coming years. These include high tensile strength and elasticity, superior chemical resistance, and lower production costs. Nanocellulose can maintain high levels of elasticity and tensile strength even at low temperatures, making it ideal for applications such as automotive components and contact lenses. Due to its small size and tight weave, Nanocellulose is resistant to most chemicals and cleaning agents. Additionally, compared to other materials, Nanocellulose requires reduced processing steps, which results in reduced production costs.

The material is fire-resistant and can be used in various applications for automobiles, construction, and textiles. One of the key drivers of the Nanocellulose market is the increasing awareness of the importance of sustainability. The demand for eco-friendly materials has led to the development of lighter and more sustainable nanocomposites.

Moreover, the growing number of companies producing eco-friendly products contributes to the growth of the Nanocellulose market. Other key drivers of the Nanocellulose market include enhanced performance in fields such as electronics and optics, increased efficiency in various industrial processes, and an expanded application range. These benefits arise from Nanocellulose's ability to substitute traditional materials in several applications effectively. For example, Nanocellulose can be used in electronic devices as an alternative to silicon dioxide; in composites as an additive instead of wood pulp; and in printing adhesives instead of petroleum-based synthetic adhesives. The key drivers of the Nanocellulose market include rising demand from various markets such as electronics and optics, increasing importance of nanomaterials in various industrial applications, and rapid advancements in technology. The increased awareness about the benefits of using Nanocellulose materials has increased their demand across various markets. For electronics and optics, Nanocellulose materials are mainly used for fabricating flexible displays, optical communication systems, and optoelectronic devices. These applications require high-performance and low-cost materials that can withstand both environmental and thermal stress. Nanocellulose materials offer superior features over traditional polymers owing to their ability to adopt a wide range of structures and patterns. In addition, they are also compatible with electronic circuits and can be processed easily using the latest technologies.

The increasing demand for Nanocellulose materials from various industries is also supported by advances in technology. Recent technological advances allow for higher production rates and improved quality of products made with Nanocellulose materials. For example, heat treatment techniques such as annealing and baking have been successfully used to produce crosslinked celluloses with tailored properties that meet specifications required by certain industries. Another notable advance is the development of chemical vapor deposition (CVD) techniques that allow for the rapid deposition of films on substrates without reliance on thermal energy or contact between the substrate and film material. This has resulted in decreased production costs and enhanced performance of films made using these methods.

The key restraints of the Nanocellulose market are stringent environmental regulations and a lack of available raw materials. The pulp and paper industry is one of the principal consumers of Nanocellulose, with applications in wet pulping, white ash processing, chlorine-free bleaching, and enhanced oil recovery. However, the market for Nanocellulose has been limited by strict government regulations preventing widespread adoption. These restrictions are likely to change as technology improves, which could lead to a larger market for nanocrystalline cellulose products. Another constraint on the market is high production costs. While there has been some progress in reducing these costs, they remain considerable barriers to entry for new players. This has led to consolidation among traditional producers of Nanocellulose materials, and novel technological developments are required to offer competitive pricing. Other constraints on the market include limited uptake in industrial applications due to several challenges, such as low lubricity, friability, lack of covalent binding, and difficult handling properties. Additionally, durability concerns have prevented some applications from being adopted commercially, such as nanoparticle carriers for drug delivery or water filters.

● The development of new methods for synthesizing nanocrystals from cellulose molecules is gaining popularity. These new methods minimize the use of solvents, ensuring better control over the final product. They also enable the production of larger quantities of nanocrystals, which is expected to drive down costs.

● Another factor driving growth in the Nanocellulose market is the increased adoption of this material in advanced composites and elastomers. Nanocelluloses are attractive due to their ability to provide high strength and low weight while maintaining flexibility and transparency. They are also ideal for coating applications as they do not suffer from water or oil repellency issues common with other coatings technologies.

● Another trend expected to bolster demand for Nanocellulose materials over the forecast period is increasing focus on smart manufacturing initiatives. This focus has increased the demand for novel materials that can be used in automated processes, such as 3D printing, laser cutting, and milling.

● One recent advancement in Nanocellulose technology is developing what is known as hyperbolic crystalline structures. These structures are much thinner than traditional celluloses so they can be used in various applications. They can also be more elastic and resistant to chlorine bleaching.

● Another potential application for Nanocellulose is as a fuel cell replacement material. In addition to being environmentally friendly, Nanocellulose could have other advantages over traditional materials regarding performance and long-term durability.

MFC and NFC segments will dominate the Nanocellulose market owing to their nano size and capacity to create a strongly entangled impermeable network. The increasing demand for high-performance nanocomposites owing to their advantageous properties such as excellent heat, vibration, oxidative and fatigue resistance, low weight, and low thermal conductivity is expected to boost the demand for Nanocellulose in the coming years. It is gaining more popularity due to its attributes, which include a high yield, a high particular surface area, the ease with which it can be prepared, and its strength properties. The bio-based nanomaterial's remarkable capacity for strengthening has been extensively used in various nanocomposites.

Based on Applications The pulp & Paper segment will dominate the Nanocellulose market. Nanocellulose is an advanced bio-composite material with excellent properties such as high strength, thermal stability, low weight, and low cost. The demand for Nanocellulose is expected to grow soon owing to the increasing adoption of this material in various applications such as health care, chemical, and aerospace industry. The pulp & paper segment will dominate the Nanocellulose market due to its large infrastructure and constant demand for paper products. However, the textiles segment is expected to grow exponentially due to increasing awareness about the health benefits of Nanocellulose and its applications in various industries such as apparel and automotive. Nanocellulose products offer high performance, resistance to abrasion, and a long lifetime compared to traditional materials. The European Cellulose Industry Association (ECIA) has announced that Nanocellulose will account for more than 50% of cellulose fiber production by 2028. This is mainly driven by declines in wood fiber usage in Europe and Asia Pacific regions and the growth of recycled content in Nanocellulose.

North America held a prominent market for Nanocellulose during the analyzed period. This can be attributed to several reasons, such as the industry's high demand for Recycled Paper, major investments in R&D by key players, and increasing awareness about nanotech concepts across the region. Asia Pacific was second with a share of about 17%. Europe followed with about 10% share. The Rest of the World (RoW) accounted for a meager 2%. North America dominated the market due to its large installed capacity and burgeoning automotive sector benefitting from the increased recycled paper output. Europe has been witnessing increased investment by key players in R&D owing to the growing demand for engineered materials and sustainable manufacturing practices. Asia Pacific is anticipated to proliferate due to increasing awareness about environmental issues and the need to reduce emissions. However, according to analysts' predictions, growth opportunities in RoW remain promising.

● For a total of about NOK 144 million, in July of 2021, Borregaard invested in the marine biotech business Alginor ASA and bought 24.99% of the company's shares.

● Stora Enso, a Finnish forest products company, stated in August 2020 that it would construct a pilot plant to manufacture Cellulose foam, a lightweight, fiber-based foam material for protective packaging and cushioning. Bio-based foams are a viable alternative to petroleum-based polymer foams in the packaging industry because of their recyclability and renewability. Stora Enso's Fors Mill in Sweden was named the site for the pilot plant.

● Researchers at the Spain's University of Girona stated in September 2019 that they had developed bio-based superabsorbent aerogels made of cellulose nanofibers.

● This past October, Stora Enso acquired Cellutech AB. Nao cellulose material for packaging applications was created thanks to the company's investment, allowing it to maintain its leadership position in the packaging market.

Segmentation of the Global Nanocellulose Market

What is the global demand for Nanocellulose in terms of revenue?