Global Multiple Sclerosis Drugs Market is valued at USD 25.1 Billion in 2021 and is projected to reach a value of USD 31.2 Billion by 2028 at a CAGR (Compound Annual Growth Rate)of 3.7% over the forecast period.

An increase in research and development activity is driving the market's expansion. The growth of the Multiple Sclerosis Drugs Market will benefit from these opportunities. Furthermore, increasing drug releases and approvals will further accelerate the market's growth rate. Additional favorable prospects for market expansion during the projected period will be provided by increased investment in the development of advanced technologies and an increase in the number of emerging markets. Most pharmaceutical companies are putting more emphasis on creating cutting-edge treatments for multiple sclerosis therapy.

However, the high cost of medications used to treat multiple sclerosis would harm the market's expansion rate. The market for Multiple Sclerosis Drugs is also significantly constrained by factors including the expiration of patents on important medications and developments in biomedical science.

· One of the main factors anticipated to fuel the market expansion for Multiple Sclerosis Drugs in the upcoming years is the increasing prevalence of multiple sclerosis.

· The market expansion for medications for multiple sclerosis is attributable to key market participants placing more emphasis on Research and Development (R&D) to create novel drugs.

Based on Drug Class:

The Immunomodulators category dominated the market in 2021

The Immunomodulators segment is anticipated to grow at the highest rate during the forecast period. The category dominated the market due to the high demand for medications for treating Multiple Sclerosis (M.S.). Relapsing forms of M.S. are treated with immunomodulators. It is beneficial in preventing clinical exacerbations and reducing the progression rate of physical disability. In addition, increased medicine demand, rising Research and Development (R&D) spending, new product releases, and the availability of cutting-edge treatment options all contribute to expanding individual markets. Patients with relapsing-remitting multiple sclerosis (RRMS) benefit from these treatments because they suppress the immune system, lessen the severity of autoimmune attacks, and stop the disease from recurring. Growth in the international market is expected to be driven by an increase in the number of drug products approved by the FDA.

The supplementary material can also find molecular antibody products and antineoplastics. The use of molecular antibodies has recently emerged as one of the most promising treatments for Multiple Sclerosis (M.S.) patients, potentially reducing the frequency and severity of relapses and inflammation significantly. As the first therapeutic option for primary progressive M.S., it is being researched as a potential reparative or remyelinating agent. There are now several different molecular antibody drugs in the works. Because of the need for these products, the market is expected to expand in the future.

Based on Route of Administration:

Oral Category Dominated the Market in 2021

The Oral segment category will hold the biggest market share. The Oral Route of Administration increases therapeutic adherence and patient satisfaction. New orally administered medications with significant therapeutic improvements approved for Multiple Sclerosis (M.S.) therapy contribute to the market's expansion. However, some adverse effects are expected due to the slow and constant release of Monomethyl fumarate (Bairam), an oral drug. It has been demonstrated that Pone's mod (Ponor), which the FDA approved in 2021, reveals fewer brain lesions than other drugs. These advantages have made oral drugs more and more well-liked. With so many major pharmaceutical companies investing heavily to improve their internal capacity to create cutting-edge oral drug delivery technologies, expanding the oral drug market in the foreseeable future exhibits enormous potential. Furthermore, the injection segment held the largest market share and is anticipated to expand throughout the projection period. The multiple sclerosis drug approvals for injections for subcutaneous use in the disease's therapy are a major factor in the segment's high growth.

North America dominated the market in 2021 due to the increasing incidence of multiple sclerosis. The market is expanding because of an increase in hospitalization procedures, the expansion of the healthcare system, and rising healthcare costs in the United States and Canada. The market is expanding because of an increase in pharmaceutical companies engaging in Research and Development (R&D) efforts to create new medications for the treatment of MS. North America is one of the largest markets due to its relatively greater per capita expenditure on healthcare. Additionally, increasing attention from major market players to cutting-edge technologies will accelerate the industry's growth rate in this area.

· In July 2022, the U.S. FDA approved a first-of-a-kind biosimilar, natalizumab, developed by Polpharma Biologics. For instance, several applications are covered by the medication, including relapsing M.S., and relapsing-remitting M.S., among others. The Marketing Authorization Application (MAA) has also been accepted by European Medicines Agency (EMA) for this proposed biosimilar.

· In August 2020, Novartis announced the launch of Kasempa (ofatumumab) with U.S. Food and Drug Administration (FDA) approval. It is the first and only targeted B-cell therapy and is self-administered for people suffering from relapsing multiple sclerosis. Kasempa combines potent efficacy with an acceptable safety profile and can be self-administered at home, filling a critical gap in the treatment of replacing forms of multiple sclerosis (RMS).

· In July 2019, Copaxone (glatiramer acetate injection) was available in the prefilled autoinjector Hypsometer from Teva Pharmaceuticals USA, Inc. With the help of this launch, patients could administer medication doses independently without needing a drug administrator. 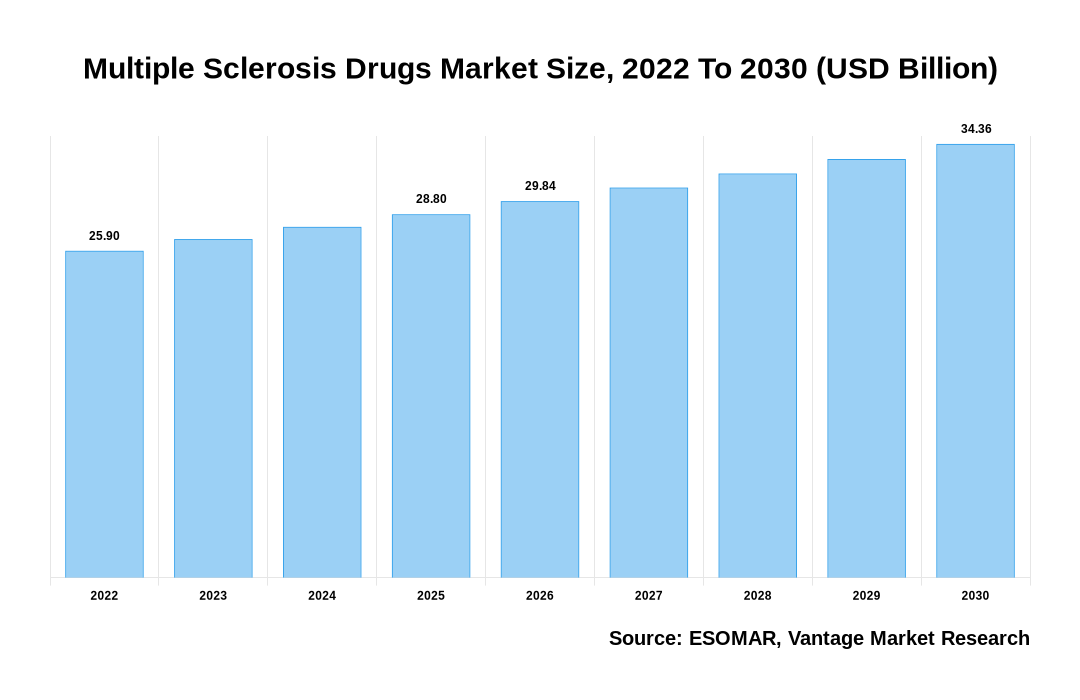 What is the global demand for Multiple Sclerosis Drugs in terms of revenue?