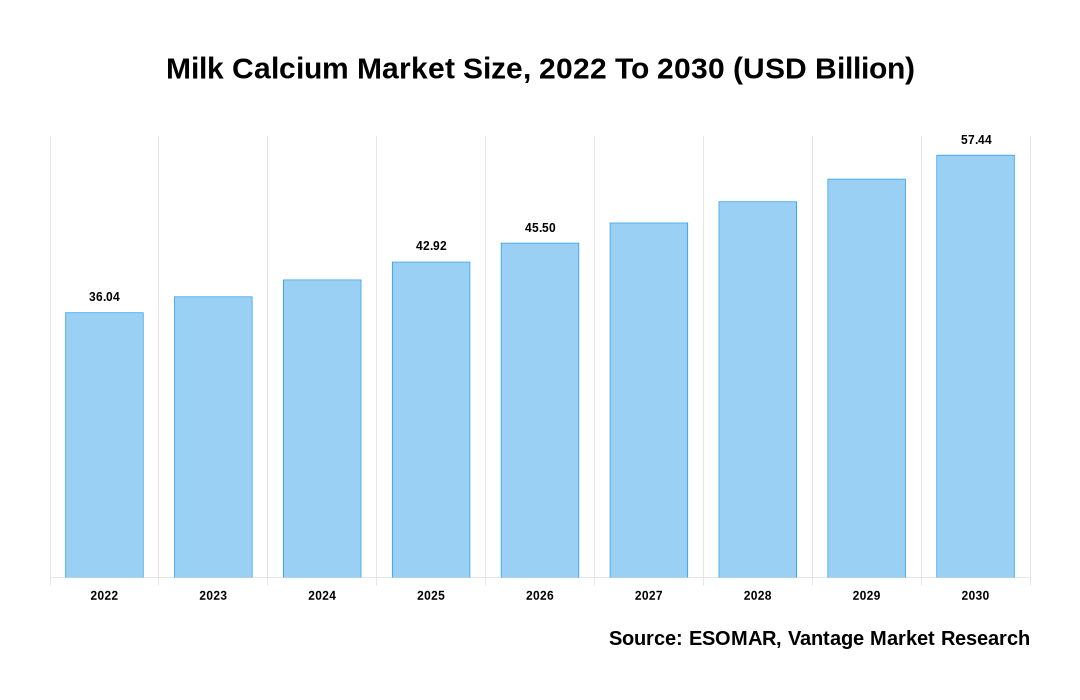 Global Milk Calcium Market is valued at USD 34.9 Billion in 2021 and is projected to reach a value of USD 50.3 Billion by 2028 at a CAGR (Compound Annual Growth Rate) of 6.3% over the forecast period.

In developed countries, the dairy industry is a big part of the GDP. The US Department of Agriculture (USDA) estimates that the dairy sector adds around $104 billion annually to the US economy. The industry also supports around 1.3 million jobs in the US. Similarly, in developing countries, the dairy sector is a major source of income and employment. For example, in India, the dairy industry is worth an estimated $60 billion and employs around 60 million people. In China, the dairy industry is worth an estimated $27 billion and employs around 3 million people. The market for Milk Calcium is growing astonishingly, and its effects can be seen everywhere. With demand continuing to rise, it’s no surprise that the dairy industry is looking for ways to capitalize on this unique opportunity. The primary factors driving the growth of this market are the increasing number of health-conscious customers and the rising demand for fortified food and beverages. In addition, the rise in disposable money and the alteration of people's lifestyles are other factors contributing to the expansion of this market. The University of Toronto performed the study, which analysed data from more than 2,700 participants aged 18 and older who participated in the National Health and Nutrition Examination Survey. The findings, which were published in the Journal of Nutrition, demonstrated that milk drinkers had higher Vitamin D levels than non-milk drinkers.

The increased demand for dairy products, such as cheese and yogurt, is also driving the growth of the Milk Calcium Market. The rising disposable incomes and the changing lifestyles of consumers are fuelling the market’s growth. The increasing demand for PCC is one of the most important growth drivers for the calcium carbonate industry. Consumers' increasing health concern and increased demand for infant formula are the primary market drivers. Additionally, the rising number of working women and their preference for ready-to-use items are anticipated to boost the market's expansion. The growing popularity of plant-based diets also contributes to the growing need for calcium carbonate. Calcium carbonate is frequently used as a calcium supplement in vegan and vegetarian diets due to its high calcium content. After 2021, it is anticipated that newer and more efficient technologies would enter the market, contributing to industry expansion. Nanotechnology and 3D printing are among the most recent technologies that are anticipated to influence the calcium carbonate industry. In addition, population growth and rising disposable incomes are anticipated to drive market expansion during the next seven years. In addition, growing urbanisation and shifting lifestyle preferences are predicted to fuel demand for dairy products, which is anticipated to positively impact market growth throughout the forecast period. Nonetheless, variable raw material costs and stringent government regulations are anticipated to restrain market expansion during the next seven years. Nonetheless, it is anticipated that a growing number of working women and hectic lives will generate new chances for industry participants in developing nations such as China, India, and Brazil throughout the projected period.

In segments, during the forecast period, the less than 20%, 20% to 25%, and 26% to 30% categories are expected to increase at a CAGR of 5%, 7%, and 8%, respectively. Due to diminishing demand from end-use industries such as paper and construction, the calcium carbonate market is anticipated to expand at a rate of less than 20% annually. Due to rising demand from end-use sectors such as plastics, paints, and coatings, the 20 to 25 percent market segments are anticipated to expand at a modest rate. Due to the rising demand from emerging economies such as China and India, the 26% to 30% market sector is anticipated to increase at a quicker rate.

The Standard Powder (>10 microns) segment is expected to grow at a higher CAGR than the Micronized Powder (<10 microns) segment during the forecast period. This is because the standard powder has a larger particle size and, thus, is more efficient in absorption by the body. Moreover, it is easier to store and transport than micronized powder.

The segment of functional foods is anticipated to experience the greatest CAGR throughout the forecast period. Demand for functional foods is driven by their health benefits. Functional foods are nutrient-dense and can aid in the prevention and treatment of numerous ailments. Additionally, they can improve health and well-being. During the projection period, the infant formula segment is expected to rise at a considerable CAGR. The demand for infant formula is driven by the requirement to give infants enough nutrition. Infant formula contains all of the necessary nutrients for infant growth and development. It is a safe and nutritious substitute for breast milk. During the forecast period, the sports nutrition segment is anticipated to develop at a considerable CAGR. These products can aid in the enhancement of athletic performance, muscle rehabilitation, and fat storage reduction. In addition, they are abundant in antioxidants, vitamins, and minerals that can improve general health. During the projection period, the beverages segment is expected to increase at a moderate CAGR. Their health benefits increase the demand for calcium-containing beverages. Calcium-rich beverages can aid in the prevention of osteoporosis, lower blood pressure, and minimize the risk of colon cancer. Dietary supplements are also rising in favor since they fill in the nutritional gaps in our diet. Calcium supplements are frequently used to prevent or treat osteoporosis, a disease characterized by bone fragility. Others include RTD (Ready-To-Drink) goods, bakery & confectionery, dairy desserts, and others. RTD goods like milkshakes and yogurt drinks are gaining popularity due to their portability and convenience.

What is the global demand for Milk Calcium in terms of revenue?