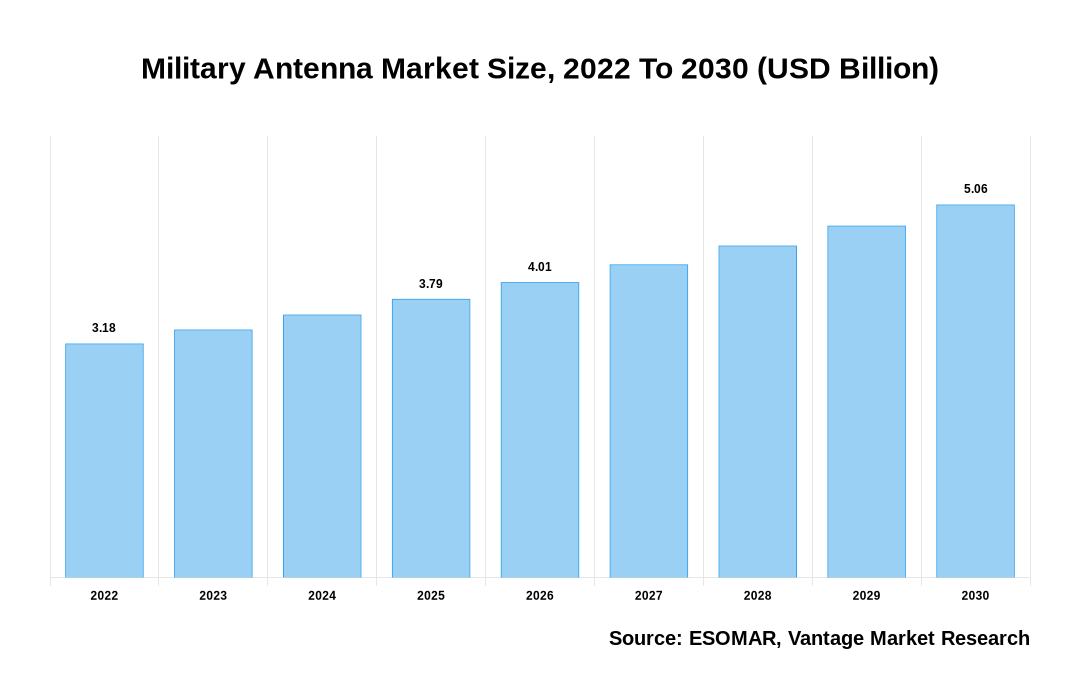 The Global Military Antenna Market is valued at USD 3.1 Billion in 2021 and is projected to reach a value of USD 4.4 Billion by 2028 at a CAGR (Compound Annual Growth Rate) of 6.3% over the forecast period.

A Military Antenna converts radio-frequency fields into alternating currents with the aid of a transducer and vice versa. It is a part of communication devices used in military aircraft, naval vessels, unmanned aerial vehicles, and armored vehicles, among other things. The component and size of an antenna might vary depending on the frequency it operates and the system in which it is deployed. The drivers driving the worldwide Military Antenna Market include the rise in military spending, the need for defense satellite communication equipment, and the use of multifunctional radars. The Military Antenna Market is expanding as a result of rising technical breakthroughs, rising demand for high-frequency military aircraft, and rising demand for contemporary fighting gear.

In addition, the market has growth prospects as a result of expanding security system surveillance and rising military expenditures. The market expansion is propelled by the development of smart antennas with many antennas. Improving the quality of qualities is a factor that encourages expansion. Even the market is being driven by the rising debates over terrorist activity. Even the market greatly benefits from the government's military hardware expenditure. A restraining aspect of the Military Antenna Market is the high cost involved in developing military antennas. Due to widespread demand, even if there are difficult market-affecting variables, the Military Antenna Market is expected to overcome them in the coming years. The high cost of R&D for antenna technology due to its intricate design is the main reason stifling the Military Antenna Market.

The reflectors category dominated the market in 2021

During the projected period, the reflectors sector is anticipated to increase at the maximum rate. This is because the novel reflector design reduces construction time. The use of reflectors in antenna assemblies modifies the antenna's emission pattern and increases signal gain in the direction of the target. Multiple manufacturers are focusing on refining the reflector's design to save assembly time.

The ground category dominated the market in 2021

During the projected period, the ground segment is anticipated to grow at the highest rate. The desire for mobile SATCOM capabilities for voice and data transmission, the widespread usage of manpack antennas in military operations, and UGV antennas for ground surveillance missions all contribute to this rise. SATCOM is also utilized by ground stations to collect and transmit remote sensing satellite data to a number of consumers and applications.

Based on Regional Analysis

Asia Pacific is accounted to grow at the highest CAGR in the Military Antenna Market during the forecast period. The Asia Pacific region has seen an upsurge in terrorist acts, which has prompted the governments in the region to improve their surveillance and counterterrorism capacities. Additionally, the expansion of military commands in emerging countries and the rise in defense spending of nations like China and India have boosted the need for military antennas in the Asia Pacific. There is a great demand for military-technical capabilities due to the region's rapidly developing defense infrastructure. Military Antenna suppliers can concentrate on growing their clientele in the neighboring nations.

· In December 2021, Raytheon Technologies received a USD 1,300 million contract from the U.S. Navy. Following the provisions of this agreement, the company will produce ESSM Block 2 anti-air missiles. This medium-range, semi-active homing missile uses radar to adjust its flight path. A warhead and semi-active homing are used from an antenna covered by a radome.

“Military Antenna Market to Reach Valuation of USD 4.4 Billion by 2028 –Rising Technology Advancements, And Growing Demand For High-Frequency Military Aircraft Drives the Market”
In terms of revenue, the Global Military Antenna Market is expected to reach USD 4.4 Billion by 2028, growing at a Compound Annual Growth Rate (CAGR) of 6.30% from 2022 to 2028. Rising technology advancements, growing demand for high-frequency military aircraft, and growing desire for cutting-edge ...
Read More

What is the global demand for Military Antenna in terms of revenue?