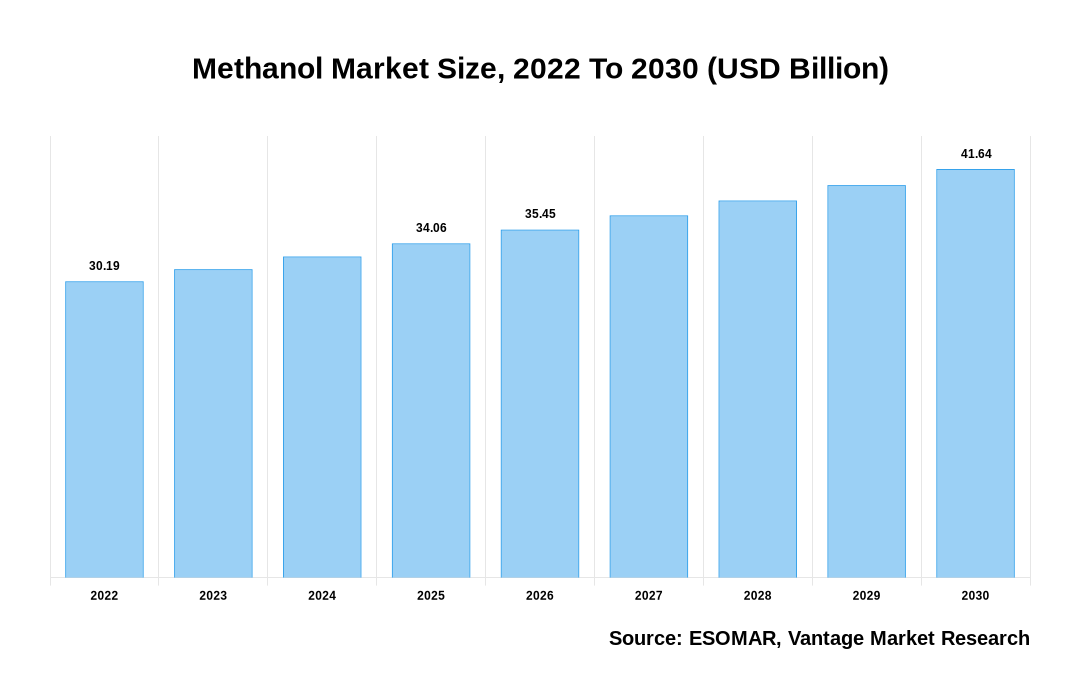 The Global Methanol Market was valued at USD 29.4 Billion in 2021 and is projected to reach a value of USD 37.8 Billion by 2028. Over the forecast period, the Global Market is anticipated to grow to exhibit a CAGR (Compound Annual Growth Rate) of 4.3%.

Methanol is a colorless, flammable, light chemical with a distinct alcoholic odor. It is also known as methyl hydrate or methyl alcohol. The packaging, pharmaceutical, paints and coatings, automotive, electronics, and insulation industries use Methanol extensively. Additionally, it is employed in producing pharmaceutical medications, hooded caps, aprons, masks, medical gowns, gloves, and other medical equipment. Methanol is also utilized to disinfect wastewater treatment facilities' water. Denitrification is when extra nitrate from sewage is transformed into nitrogen gas and discharged into the atmosphere. The growth prospects for the Methanol Market size will assist the market in achieving exceptional market revenue by the end of the forecast time. Methanol, as a component, is a clean-burning marine fuel recognized as cost-effective and aids in meeting the shipping industry's more rigorous criteria & emissions norms that will be implemented throughout the projection period.

Furthermore, regarding fuel storage and bunkering infrastructure expenditures, Methanol is emerging as a cost-effective option in the form of maritime fuel. Because it is available in liquid form, minor adjustments to the existing bunkering infrastructure are required to handle Methanol. The cost of adapting fuel vessels to run on Methanol is relatively low compared to the cost of converting and running alternate fuels. As a result of this market fact, the use and demand for Methanol as a marine fuel are increasing globally. It has been used in numerous global undertakings and commercial activities sweeping the globe.

The Natural Gas category dominated the market. This dominance is because producing Methanol from natural gas as a Feedstock is a straightforward process that can reach the requisite purity of Methanol. Furthermore, using Natural Gas as a Feedstock is safer than using flammable gasoline fuels. Natural Gas produced Methanol has an efficiency of roughly 50-60%, which is expected to raise the Methanol Market size throughout the projection period.

Based on End User Industry:

Automotive category dominated the market in 2021

Asia Pacific is accounted to grow at the highest CAGR (Compound Annual Growth Rate) during the forecast period. In addition, Methanol demand is increasing quickly in China and India since it is a clean fuel and an alternative to gasoline-based fuels. For instance, India will open its first pilot plant in Hyderabad in September 2021 to accelerate the shift to clean technologies to convert high ash coal to Methanol. This plant will also lower India's crude oil imports and use Methanol as a transportation fuel. These factors are expected to raise the Asia-Pacific Methanol Market share throughout the forecast period.

Segmentation of the Global Methanol Market:

What is the global demand for Methanol in terms of revenue?