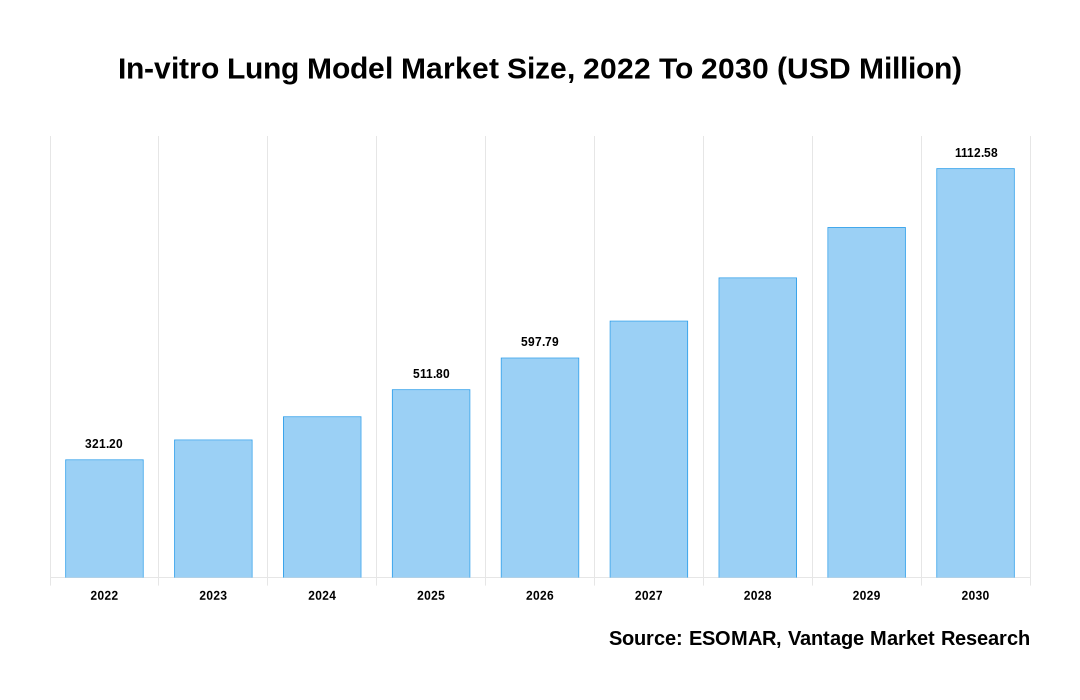 Lung in Vitro Model Market: By Type, Application, and Region

Global Lung in Vitro Model market is valued at USD 275.1 Million in 2021 and is projected to attain a value of USD 976.1 Million by 2028 at a CAGR of 17.1% during the forecast period, 2022–2028. The increase in awareness and attention on developing alternatives to animal testing models is a major factor contributing to the market's growth. The shift in focus is owing to two factors: first, despite their many parallels, there are distinctions between a specific animal species and humans; second, animal protection and welfare are important considerations when using animals for scientific purposes. Russell and Burch's '3Rs' should be followed, according to the Animal Welfare Institute, which states that animals should be replaced in research with alternatives, the number of animals used in experiments should be reduced, and the care and treatment of those animals who are still used in research, testing, and education should be refined.

The industry's expansion will be fueled by the world's ageing population. According to the World Health Organization, the global population of people aged 60 and more will increase from 12% in 2015 to roughly 22% in 2050. With increasing age, muscle strength and physical labour capacities deteriorate. The Lung in Vitro Model market will continue to grow as more testing will be re in the near future.

For the past few years, the global Lung in Vitro Model industry has exploded in popularity. The increased prevalence of fatal lung dysfunctions such as Chronic Obstructive Pulmonary Disease (COPD), pneumonia, asthma, lung cancer, and Idiopathic Pulmonary Fibrosis is one of the key reasons driving revenue growth (IPF). To study lung illnesses and find new pharmacological therapies, researchers are using advanced Lung in Vitro Model. Revenue growth is being boosted by technological breakthroughs in cell culture and the increased acceptance of lung in vitro models rather than animal testing methods. Furthermore, growing applications in regenerative medicine are likely to create profitable prospects for global market leaders.

Despite technological breakthroughs in cell culturing techniques and the development of 2D and 3D in vitro models, a prominent factor projected to stymie market expansion during the forecast period is the lack of trained professionals and skilled researchers to operate and set up experiments. Furthermore, poor penetration of Lung in Vitro Model, high costs of setting up in vitro procedures, and a lack of awareness about the models, particularly in developing countries, are projected to restrain the worldwide Lung in Vitro Model market's growth over the forecast period.

North America is Expected to Dominate the Market

North America is expected to hold the highest proportion of the global market in 2020. The flourishing research environment and ample financing programs, such as higher finances for the National Institutes of Health (NIH) and increasing R&D activities by biotechnology and pharmaceutical businesses, are driving market growth in North America.

The Lung in Vitro Model market is segmented as follows:

The Lung in Vitro Model market scope can be tabulated as below:

What is the global demand for Lung in Vitro Model in terms of revenue?