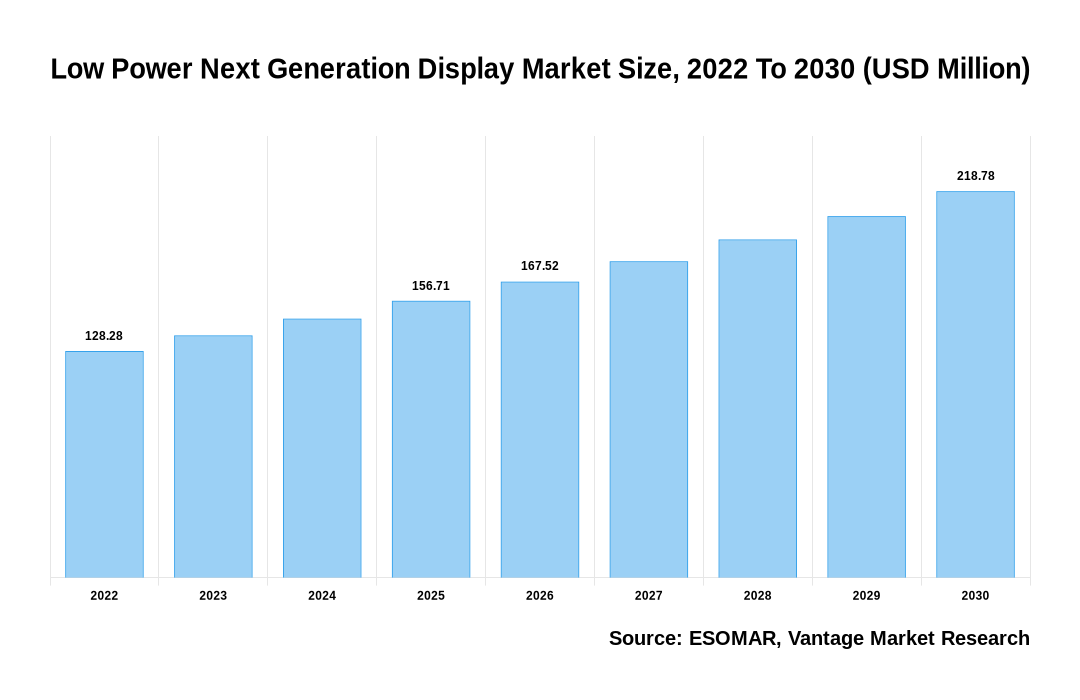 Global Low Power Next Generation Display market is valued at USD 120.4 Million in 2021 and estimated to reach a value of USD 193.9 Million by 2028 at a CAGR of 7.1% during the forecast period, 2022–2028. The demand for next generation display is driven by several factors. These include the need for higher resolution with lower number of pixels, use of smart devices having wireless capabilities etc. There’s another factor also responsible behind the growing demand for these displays and that is environmental concerns. The world has seen a drastic change in energy policies over the past few years. Global warming and energy crisis have pushed the governments into taking strict measures to reduce power consumption. As a large part of the power consumed by the world is used for display, it will be good if they can get more out of same amount of power.

Display is an essential part of the device. At the same time, large screen LCD or OLED displays are still consuming huge amount of power comparing to other parts of the device. It's a big headache for the manufacturers, and they are trying to reduce power consumption as much as possible without compromising on user experience. Recent advancements like more efficient Liquid Crystal (LCD) technologies and OLED displays can provide decent brightness and low power consumption, but those things make them expensive.

Manufacturers are focusing on developing next-generation displays with reduced power consumption. These systems consume less power, but can deliver even better results. Some manufacturers are working on the design of impregnated LED pixels which tend to consume less power than conventional displays. Although current developments in these technologies will create a huge impact on the market, still they need to meet certain requirements in order become truly successful. Next generation displays have been developed keeping in mind the concerns of environmental factors.

Significant growth in demand for low power display is coming from emerging applications including smartphones display, television display, automotive displays and portable devices such as tablets. Although AMOLED has been commercially available for several years, the high cost of glass substrates used in its manufacture has limited the technology's application until now. AMOLED displays are being used in large number of handsets, including the Samsung, Google, and Xiaomi, among others. Samsung Display has decided to go forward with its first large-sized OLED production line in Gumi, Korea due to an increase in demand from major customers such as Apple and other popular handset manufacturers.

One of the biggest advantages of OLED displays over LCDs is energy efficiency. OLEDs do not require a backlight, unlike LCDs which have to keep their backlights on when displaying black. This means that in dark scenes an OLED display can turn off individual pixels without a significant impact on brightness or power consumption. In fact, pure self-illuminating OLEDs can be so energy efficient that they can remain illuminated indefinitely and only use power for pixels changing state. One of the frontier technologies currently under development aims at utilizing this ability to lower power consumption even further: Double Patterning with Retention (DPR) is a display technology aiming at eliminating both patterning and retention losses caused by electron-beam lithography. By tiling double patterned active-matrix OLED displays pixels are allowed to retain their state between refreshes, thus reducing energy consumption.

The traditional display industry has been underperforming other technology sectors. The mass production of flat panel TV drove a fast growth in demand for semiconductor and display materials such as Silicon and LCDs until 2015. However, due to its maturity, the display industry is not experiencing growth like other technology sectors anymore. Additionally, various disruptive technologies are challenging traditional liquid crystal display (LCD) panels in recent years. Despite these challenges, Asia Pacific has emerged as one of the largest consumers of Low Power Next Generation Display.

The growth is majorly attributed to various factors such as rapidly expanding consumer electronics market, economic activities to support higher income among people, and increase in middle class. The number of senior citizens aged 65 or older will reach 106 million in 2050. APAC has the world’s largest population who are over 60 years old. The rapidly aging society is making demand for self-driving car, medical devices, IoT (Internet of Things), and displays for various devices such as PC monitor, TV, wearable smartphones.

Low Power Next Generation Display Market is segmented as follows:

Low Power Next Generation Display Market is tabulated as follows:

What is the global demand for Low Power Next Generation Display in terms of revenue?