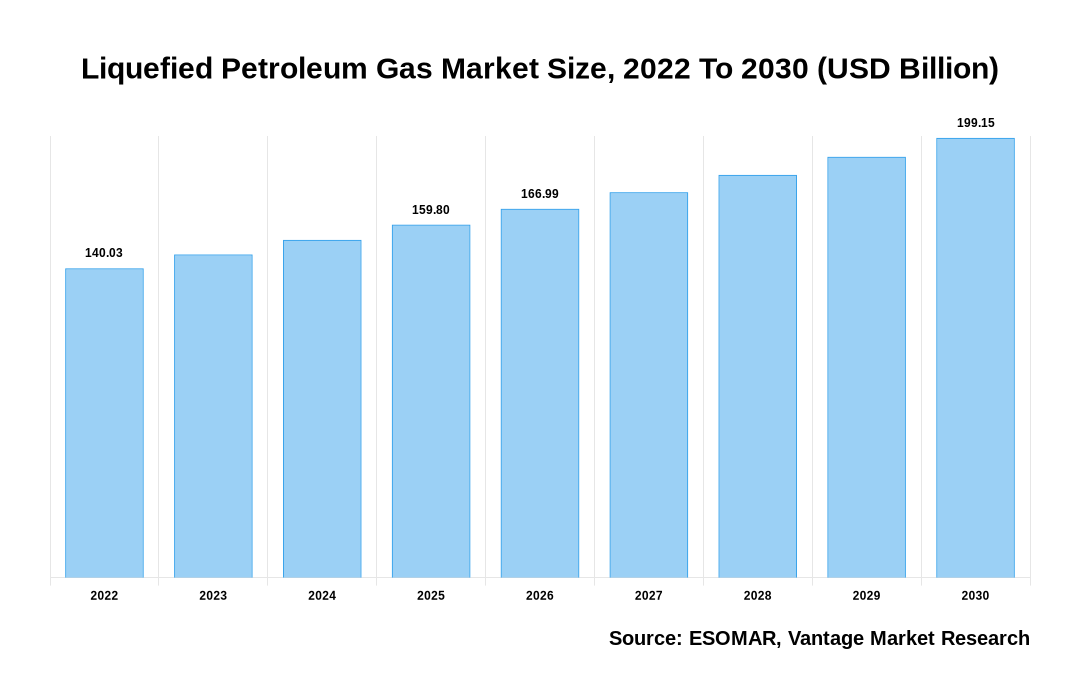 The Global Liquefied Petroleum Gas Market was valued at USD 134.2 Billion in 2021 and is expected to reach a value of USD 177.7 Billion by 2028. In the estimation period, the Global Market is forecast to expand by exhibiting a Compound Annual Growth Rate (CAGR) of 4.8%.

A clean, non-toxic, renewable, and portable energy source with many uses in both home and industrial settings is Liquefied Petroleum Gas (LPG). It is made up of a combination of explosive hydrocarbon gases, such as propane, butane, and isobutane. Large gas cylinders, tanks, and steel vessels were stored and delivered. In addition, it has higher heat energy than natural gas and burns quickly in the air. LPG thus has a wide range of uses in the automotive, manufacturing, chemical, and domestic industries. Furthermore, global energy consumption is rising due to the expanding world population. This rise is one of the main factors favorably affecting the market and expanding infrastructure worldwide.

Additionally, people use renewable energy sources more frequently due to increased concerns about pollution and carbon emissions. The need for LPG as an auto-emission gas in the automobile industry is growing, boosting the market. Governments from different nations are educating the rural populace about the value of switching from conventional energy sources like coal, wood, and kerosene to LPG. They are introducing beneficial policies and providing tax breaks and supplier subsidies, improving the sector's outlook. Ongoing advancements bolster the market expansion in natural gas extraction and refinement technology. In addition, rising expenditure in Research and Development (R&D) efforts by top market players to launch more improved goods are anticipated to fuel the market.

The Residential category dominated the market in 2021. This domination is due to increased demand for Liquefied Petroleum Gas from domestic applications such as space and water heating, cooking, and power generation. It also offers cost-effectiveness, energy efficiency, and environmental friendliness, further fueling market expansion in the upcoming years. The primary drivers of the category growth have been the government's promising subsidies and measures to support the product as the immediate replacement for conventional fuels like coal and wood.

The Asia Pacific is expected to rise at the highest Compound Annual Growth Rate (CAGR) during the forecast period. The main key drivers of the regional market growth have been population increase, adequate resource availability, and high energy needs, along with simple affordability due to government subsidies on Liquefied Petroleum Gas (LPG) cylinders. The expanding petrochemical capacities also support this in China, Thailand, South Korea, India, and China. Liquefied Petroleum Gas imports from the Middle East and the United States increased gradually as India became a significant importer of fuel to support local fuel use. The region's chemical industry has grown significantly recently, using this gas as the primary feedstock to synthesize various chemicals and plastics. In the Asia Pacific, the auto-gas (LP gas as a transportation fuel) market has grown more swiftly.

What is the global demand for Liquefied Petroleum Gas in terms of revenue?