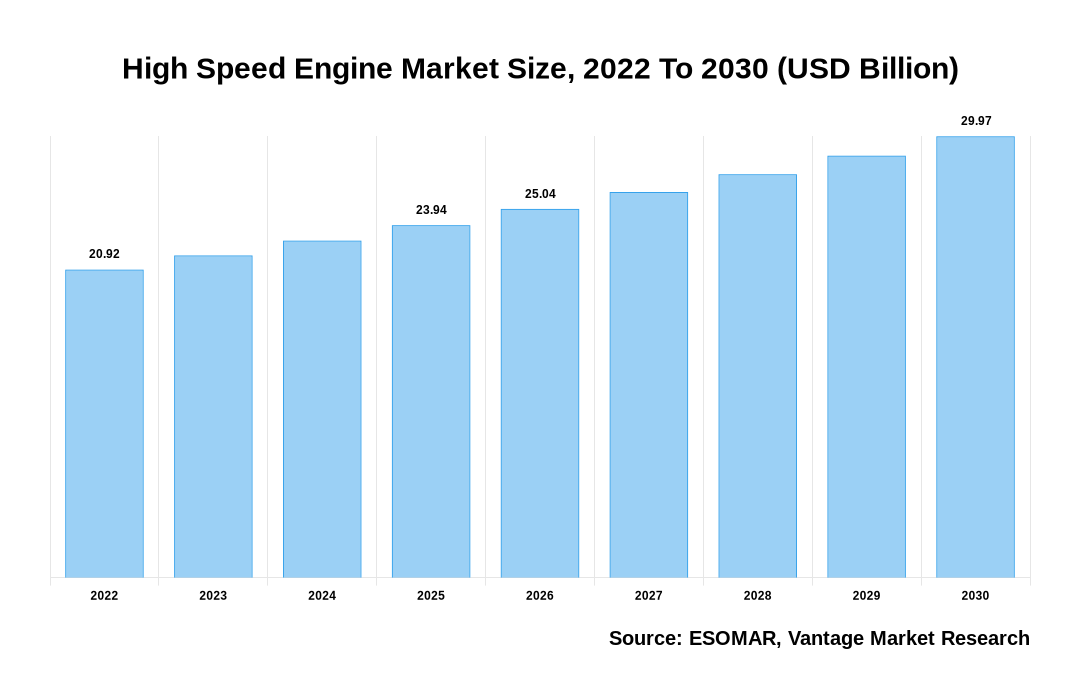 The Global High Speed Engine Market was valued at USD 20.7 Billion in 2021 and is projected to reach a value of USD 27.2 Billion by 2028. In the projection timeline, the Global Market is anticipated to grow to exhibit a CAGR (Compound Annual Growth Rate) of 4.7%.

High Speed Engine are frequently employed as primary and emergency Genset drives on all sorts of cargo and propulsion on small, usually specialized, commercial vessels. Technological advancements have benefited High Speed Engine designs, including modular assembly, electronically controlled fuel injection systems, standard rail fuel systems, and advanced electronic control/monitoring systems. The rising demand for dependable and uninterrupted power drives the market for high-speed engines for backup power generation. The expansion of international marine freight transport, which fuels demand for high-speed marine engines, is among the most critical and key factors propelling the growth of the Global High Speed Engine Market. The frequency of maintenance procedures can be increased by elements like extraordinarily high or low temperatures, bad weather, and salt water. New technologies like battery energy systems for backup power solutions have low maintenance requirements and no fuel expenditures. High fuel prices and the operating and maintenance expenses of high-speed engines could become significant market growth restraints due to the increasingly ferocious competition from these developing technologies.

The 1500–1800 rpm segment dominated the market in 2021, and it is expected to continue its significant share in the projection timelines. These high-velocity motors are commonly used in boats, ships, and other sea-related applications. Four-stroke, diesel-fueled engines have a speed range of 1500 to 1800 rpm. Most high-velocity motors in various verticals have uprooting limits of 95 liters or less, which is lower and better than motors with lower rpm. In addition, these 1800 rpm motors are inherently lighter than motors with lower speeds.

Based on Power Output:

The 1–2 MW segment dominated the market, and the trait is expected to continue in the projected period. Speed motors with a power result of 1 MW to 2 MW are widely used in numerous fields and have the largest share of the pie. This spectrum of force generation is quite advantageous for power generation in all train areas. These motors will almost certainly produce 1MW to 2MW of power. In addition, many companies all around the world use generators to generate power for usage for a variety of purposes.

Asia Pacific region is forecast to grow at the highest CAGR (Compound Annual Growth Rate) during the forecast period. With the taxpayer-supported "Make in India" effort, the Asia-Pacific High Speed Engine Market has a huge opportunity for development and improvement over the forecast period. Some world's largest vehicle manufacturers are based in India, China, and Japan. Diesel-powered high-speed engines are in high demand throughout the Asia Pacific (APAC). The APAC region's thriving manufacturing and power generation industries should be the fastest-growing market.

What is the global demand for High Speed Engine in terms of revenue?