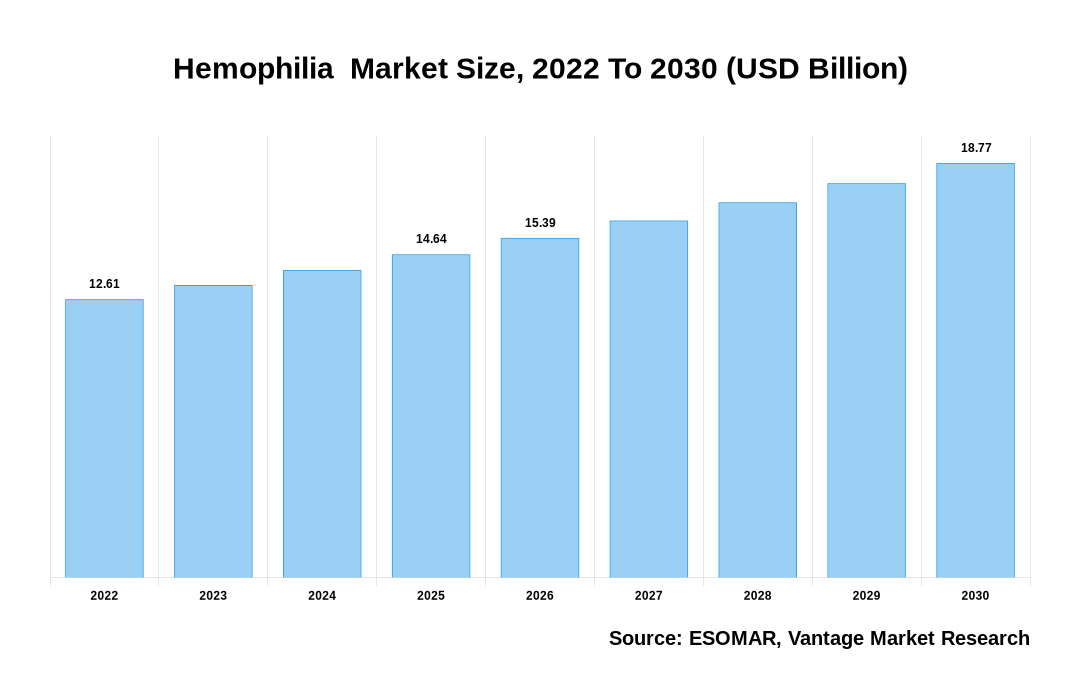 Global Hemophilia Market is valued at USD 12.1 Billion in 2021 and is projected to attain a value of USD 14.2 Billion by 2028 at a CAGR of 5.3% during the forecast period, 2022–2028. One of the primary aspects projected to favourably impact market growth is increased R&D initiatives, particularly in the area of finding medicinal compounds. The limited treatment therapy alternatives available and the growing regulatory burden on regulatory authorities to address it result in increased R&D initiatives. Furthermore, increased public awareness campaigns and supportive actions, such as the government's proposal to begin early neonatal screening, are projected to increase the demand for Hemophilia diagnostic equipment.

The global market is expected to develop due to the rising prevalence of bleeding diseases and their increasing severity as a result of genetic evolution. Hemophilia Association of America, for example, gives patients continued treatment by launching various co-pay schemes. It is also envisaged that this will help patients manage their budgets and gain access to new items.

The recent outbreak of COVID-19 has prompted Hemophilia solution vendors to respond fast in order to meet the growing need for high-quality virus protection services. COVID-19 has engulfed the whole healthcare ecosystem, from pharmaceutical corporations to medicine producers to COVID-19 vaccine developers to health insurance and hospitals, thanks to its rapid expansion. During this time, applications like telemedicine, remote patient monitoring, and interactive medicine, as well as inpatient monitoring, are projected to gain popularity.

The key element driving the Hemophilia industry's growth is the rising number of Hemophilia cases around the world. Over 49,083 people were diagnosed with bleeding disorders in 2019, and this number is expected to rise to 400,000 by 2020-2021. Furthermore, advantageous government schemes in various countries, such as lowering the cost of Hemophilia Treatment, have influenced market growth. The availability of a wide range of therapy and drugs has boosted demand for Hemophilia treatment. Some of the most often used therapies and pharmaceuticals in Hemophilia treatment include inhibitor therapy, home therapy, free factor replacement, antifibrinolytic medicines, gene therapy, and physical therapy. These factors have had a significant beneficial impact on the growth of the Hemophilia Treatment Market.

In recent years, the rise of the Hemophilia treatment market has been assisted by expanding government programmes and aggressive campaigning. Also, medical guidelines based on COVID immunisation have improved the treatment and facilities connected to haemophilia therapy. Because of the improved life quality and overall therapy seen in Hemophilia patients, injectable administration has seen a growth rate of more than 5% in recent years. New technologies and pharmaceuticals have revolutionised the Hemophilia market perspective. Recent inventions have proven up to 80% recovery from the condition's symptoms and a 94% reduction in annual bleeding rates. These reasons have paved the way for the expansion of the Hemophilia industry.

The Hemophilia sector is now being hampered by the higher prices connected with recombinant products and the problems associated with replacement therapies. Patients with Hemophilia who get replacement therapy develop problems including as viral infections like hepatitis B and C or HIV. The growth of the Hemophilia Treatment sector has been hampered by these negative actions on treating the disorder. Patients have the ability to generate inhibitors that prevent the injected clotting factor from working. Those with severe Hemophilia A have a 20-30% risk of having these inhibitors, while patients with Hemophilia B have a 2-5 percent chance of developing them. The growth of the Hemophilia therapy sector has also been influenced by these reasons.

North America dominated the market in 2020, accounting for roughly 44.4 percent of total sales. The preliminary drivers of regional expansion are expected to be rising prevalence combined with a growing desire toward preventive treatment. People in the United States are diagnosed with this condition at a young age. Asia-Pacific, on the other hand, is expected to develop at the fastest rate during the projection period. The important effect delivering drivers are early diagnosis of diseases in countries such as Japan, India, Indonesia, and Malaysia, as well as increased per capita use of medicines for factor VIII and IX insufficiency.

Some of the players in the Hemophilia Market include Swedish Orphan Biovitrum AB, Sanofi SA, Pfizer, Novo Nordisk, Genentech, CSL Behring, Biogen, among other market players.

Hemophilia Market is segmented as follows:

Hemophilia Market is tabulated as follows:

What is the global demand for Hemophilia in terms of revenue?