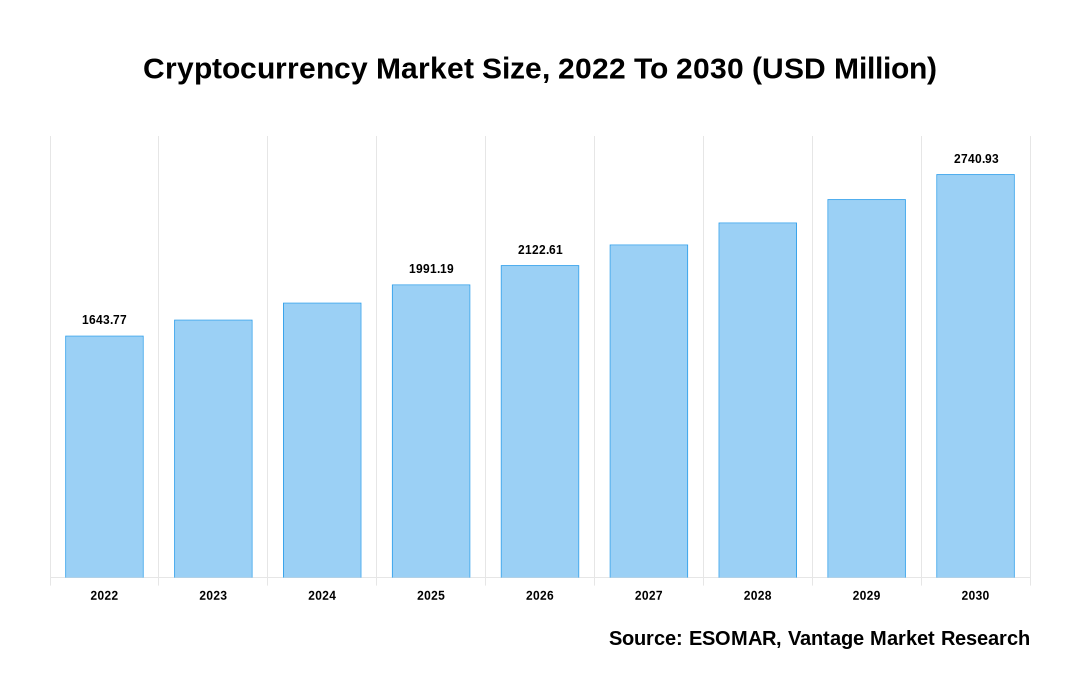 Cryptocurrencies are digital assets that use cryptography to secure transactions, control access, and verify ownership. They were created as open-source technologies that rely on distributed ledger systems to track and validate transactions. Cryptocurrencies were designed to solve problems associated with central banking systems and other financial institutions. These cryptocurrencies can be used to purchase goods and services or exchanged for traditional currency. As cryptocurrencies have become increasingly popular over the past few years, their popularity has grown exponentially. This has led to increased demand for Cryptocurrency wallets and exchanges, which have resulted in greater adoption rates across industries.

The Cryptocurrency Market has grown exponentially over the past few years. In 2018, the market was valued at $828 billion. By January 2022, this figure had grown to $2 trillion. This increase in value can largely be attributed to increased adoption among both consumers and businesses. As the number of users continues to rise, the demand for cryptocurrencies increases. In addition to consumer adoption, the business sector has been quick to adopt cryptocurrencies. Many large companies have begun accepting Bitcoin as payment for their products and services. Other companies are developing their own proprietary coins to facilitate faster and cheaper transactions.

The premise of Cryptocurrency is predicated on the decentralization of transaction monitoring. Miners (usually users) validate transactions performed by other users as part of the transaction monitoring process. The system requires a lot of computer resources to authenticate the transactions in this procedure. To encrypt the transactions, the validation step involves the production of hash codes. The miner requires extremely efficient and productive hardware to compute a hash code. As a result of the increased demand for software upgrades and to improve the effectiveness of financial payment tools, the hardware segment has gained a significant portion of the Cryptocurrency Market. However, over the Cryptocurrency Market forecast period, the software category is predicted to develop at the fastest rate, as it helps to handle the vast volume of data being generated.

Mining is a crucial step in the production, transmission, and authentication of Cryptocurrency transactions. It assures that the currency is propagated from a payment to a recipient in a consistent, protected, and responsible way. Unlike monetary system, which is controlled and regulated by a centralized authority, cryptocurrencies are decentralized and operate on a peer-to-peer basis.

Blockchain technology, which records a tamper-resistant record of transactions and keeps track of who owns what, underpins Bitcoin as well as the rest cryptocurrencies. Public blockchains are often decentralized, meaning they lack a central authority such as a bank or government. Many individuals and corporations have already benefited from Bitcoin as a source of revenue. The economy is slowly responding to these demands, and the Cryptocurrency Market has a lot more potential to meet them. Changing demographics, rising demand, and a willingness to absorb new technologies like blockchain, IoT, and others make cryptocurrencies desirable in emerging countries.

North America has been the largest market for Cryptocurrency since its inception, accounting for 41.3% in 2021. This is due to the fact that many countries like US and Canada have regulations in place that allow crypto payments to have a high degree of anonymity.

Asia Pacific region is expected to experience steady growth for the foreseeable future. China, Japan, South Korea, and Australia are leading the way in adoption of cryptocurrencies. Countries like Singapore and Hong Kong have taken steps towards promoting compliance in taxation and regulation of the industry. While these efforts are positive developments, they do come at a cost, limiting access to technology and information. As a result, Asian markets are often overlooked when discussing trends in the Cryptocurrency space, especially compared to their counterparts in North America and Europe.

• Rest of Middle East and Africa

What is the global demand for Cryptocurrency in terms of revenue?