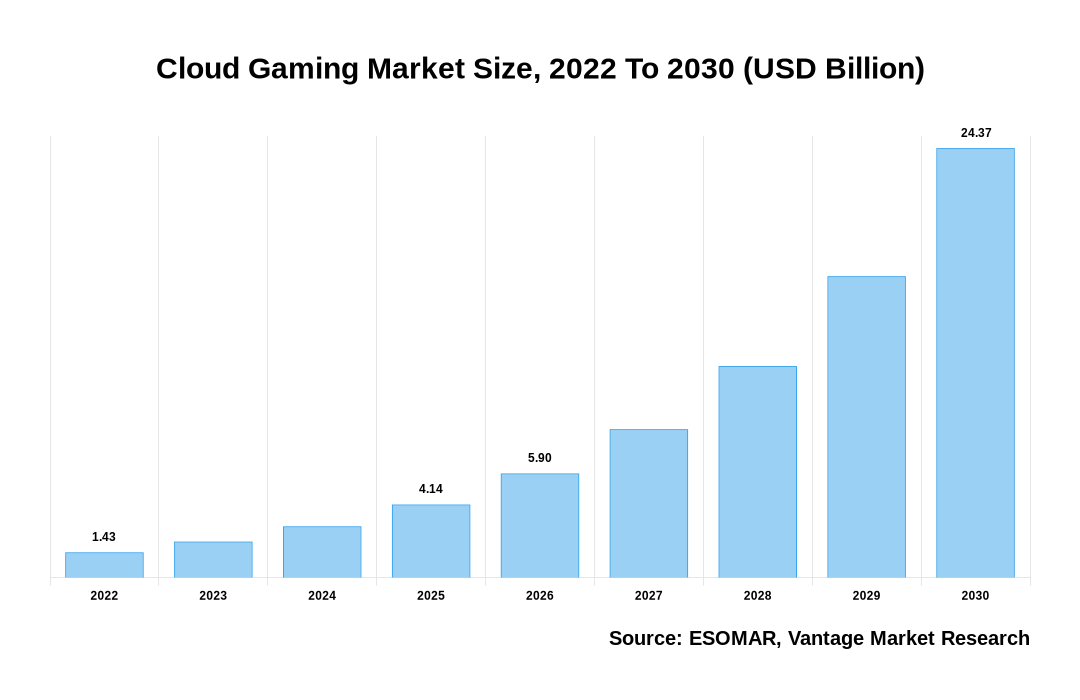 The Global Cloud Gaming Market was valued at USD 1.5 Billion in the year 2021 and is expected to reach a value of USD 12.6 Billion by the year 2028. The Global Market is anticipated to grow to exhibit a Compound Annual Growth Rate (CAGR) of 42.7% over the forecast period.

Cloud Gaming technology functions as integration into cloud technology, necessitating less storage on the user's device. The market is projected to be influenced by the growing demands for video games and low-cost gaming solutions. The introduction of a new line of videogames favors the market, as consumer interest in diverse experiences is increasing. Mobile gaming lovers are skyrocketing in the global Cloud Gaming business. In addition, consumers' high disposable income supports the demand for luxury smartphones, encouraging the introduction of cloud gaming.

The top cloud games are multi-player online war arenas such as PUBG, Call of Duty, and Vainglory. These games have developed an entire environment that serves as a market engine for growth. The Cloud Gaming business is built on developments in hyper-scale cloud capabilities, online media streaming, and worldwide content delivery networks. Cloud Gaming presents a highly lucrative possibility for gaming companies worldwide by exploiting these technologies and growing internet connectivity. The technical aspect of online cloud-based gaming is one of the most significant challenges that market players experience. The growing popularity of cloud gaming, combined with the advent of upgraded, cross-platform gameplays, is likely to boost market expansion.

Based on Device Type:

Smartphones are supposed to achieve substantial market penetration in the following years. One of the benefits of this technology is its low cost. However, it is just too expensive to maintain upgrading platforms and PCs to sustain gaming skills. Upgrading consoles and customizing PCs need additional spending, while cloud computing only demands a laptop, a 5G device, or a smart TV.

The Video Streaming segment is anticipated to grow at the highest rate during the forecast period. Video Streaming is becoming increasingly popular since it eliminates the need for additional hardware devices. As a result, companies have expanded their attention to developing systems that deliver a better gaming experience, propelling the worldwide Cloud Gaming industry. The variables that can be ascribed include the ability to play games anywhere and, on any platform, if it is linked to the internet. In addition, many prominent players, including Shadow, GeForce Now, Liquid Sky, and Vortex, allow video streaming games. Furthermore, video streaming services enable consumers to access and play games from any device and location while maintaining low latency via the internet.

Asia Pacific is Projected to Grow at the Highest CAGR during the Forecast Period:

The Asia Pacific accounted for a significant market share during the forecast period. The region's economics and huge gaming population are the major factors driving the market growth. China and India are the world's most populous countries. In addition, Cloud Gaming services have also grown in popularity in Japan. The gaming market in these countries is increasing due to the rapid growth of technology and numerous significant game firms, such as Konami, Sony, and Nintendo, which have been household brands for decades. Aside from improvements, the accessibility of access to games and the lower purchasing cost of these games are essential development factors in this region's market during the forecast period.

Cloud Gaming Market to Reach Valuation of USD 12.6 Billion by 2028 – Rising Industry Player’s Investment in the Development of Advance Product Drives the Market
In terms of revenue, the Global Cloud Gaming Market is expected to reach USD 12.6 Billion by 2028, growing at a Compound Annual Growth Rate (CAGR) of 42.7% from 2022 to 2028. The rapid surge in a console applications and increasing demand for video games in the young population is likely to boost ...
Read More

What is the global demand for Cloud Gaming in terms of revenue?