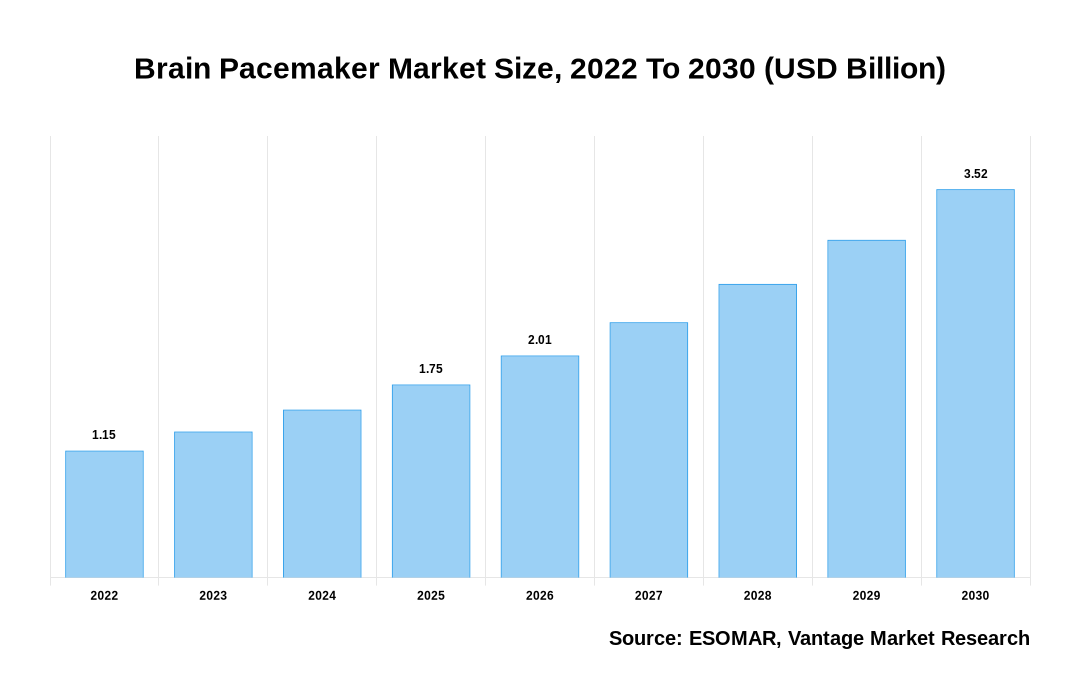 Global Brain Pacemaker market is valued at USD 1.44 Billion in 2021 and is projected to attain a value of USD 3.941 Billion by 2028 at a CAGR of 15.1% during the forecast period, 2022–2028. A pacemaker is an electrical device that causes an electrical beat to be sent to the heart if the heartbeat is irregular (or arrhythmia). If there is an irregular electrical activity, a brain pacemaker (also known as a wireless artifact-free neuro-modulation device) gives electrical stimulation to the brain. The gadget is wireless and self-contained, which means that once it learns to recognize the signals of seizures (or other abnormal electrical activity in the brain), it can regulate the stimulation parameters on its own to counteract the abnormal electrical activity. The device is also closed-loop, meaning it can administer electrical signals while simultaneously recording electrical events in the brain and regulating stimulation parameters in real time.

Factors such as the growing population, the need to expand healthcare access, the rising prevalence of chronic diseases and conditions, a physician shortage, advancements in telecommunications, government support, increasing awareness, and increasing technology adoption are all driving growth in the Brain Pacemaker market. In the aftermath of COVID-19 regional variances in regulations, fraud, and the use of social media for care provision, on the other hand, will have a negative impact on market growth during the projection period.

Rise in Cases of Parkinson’s Disease & Epilepsy Across the World

The growth in incidence of Parkinson's disease and epilepsy around the world, as well as the rising rate of diagnosis and treatment of epilepsy, Parkinson's disease, and other neuro-stimulation disorders, are driving the global brain pacemaker devices market. However, the global market's expansion is expected to be hampered in the near future by strict medical device regulatory standards and high prices. During the forecast period, technological advances, continuing clinical trials, increased research and development spending by leading players, and strategic partnerships among key businesses are expected to drive the worldwide brain pacemaker devices market.

The cost of implementing a Brain Pacemaker system across an entire healthcare center is considerable. This has been exacerbated by the pandemic, which has caused hospitals to redirect cash from other departments to treat COVID-19 patients. Due to the low priority now assigned to this sector, scheduled orders for RFID or RTLS systems may be postponed or cancelled. The American Hospitals Association estimates that the epidemic cost the country USD 202.6 billion between March and June 2020. A single COVID-19 patient's treatment with ventilator assistance can cost upwards of USD 88,000. As a result, Brain Pacemaker systems are extremely expensive, costing at least USD 2 million to implement in a large hospital.

The Brain Pacemaker market scope can be tabulated as below:

The global Brain Pacemaker market can be segmented based on application, end-user, and region. In terms of Application, the global market can be classified into Parkinson’s disease, Epilepsy, and Others. Based on End-user, Hospitals & Ambulatory Surgery Centers, Specialized Neurology Centers, And Others (Academic & Research Centers). Based on Region, the Market is segmented into North America, Europe, Asia Pacific, Latin America and Middle East & Africa.

North America is the market leader, followed by Europe. Because of the huge number of people suffering from neurological abnormalities, high detection and treatment rates of neurological disorders, robust health care infrastructure, and the presence of key competitors, North America held the greatest share of the global market in 2021. In 2017, the Centers for Disease Control and Prevention (CDC) estimated that 1.3 percent of the population in the United States had active epilepsy, and 0.02 percent of the population had Parkinson's disease.

The Brain Pacemaker market is segmented as follows:

What is the global demand for Brain Pacemaker in terms of revenue?