Global Bakuchiol Market is valued at USD 5.1 Million in 2021 and is projected to reach a value of USD 7.3 Million by 2028 at a CAGR (Compound Annual Growth Rate) of 6.3% over the forecast period.

The market is driven by the rising demand for Bakuchiol-based products owing to the growing awareness of its benefits among consumers. The scope of the Bakuchiol Market includes Bakuchiol-based products such as skincare, haircare, and cosmetics. The skincare segment accounted for the largest share of the market in 2019. The rapid increase in the demand for skincare products that are free from synthetic ingredients is expected to drive the growth of the Bakuchiol Market.

On the other hand, major restraints for the market are the lack of clinical data and the high cost of Bakuchiol-based products. Bakuchiol is a lesser-known skincare ingredient, so one of the main restraints of the Bakuchiol Market is consumer awareness. A major chunk of consumers is not familiar with Bakuchiol and its benefits, so producers must invest in education and marketing to raise awareness of the ingredient. Additionally, Bakuchiol is more expensive than some other skincare ingredients, so it may be priced out of reach for some consumers.

The Global Bakuchiol Market is a complex and dynamic ecosystem consisting of a large number of stakeholders, including Bakuchiol producers, raw material suppliers, formulators, finished product manufacturers, distributors, and retailers. The Global Bakuchiol Market is also influenced by a number of other factors, including government regulations, economic conditions, and consumer trends.

● Another trend that is driving the growth of the Bakuchiol Market is the rising demand for vegan cosmetics. As more and more consumers become aware of the cruelty involved in the production of animal-based products, they are increasingly opting for vegan alternatives.

● The Bakuchiol Market is being aided by the growing trend of DIY skincare. Consumers are becoming more interested in making their own skincare products at home, using natural ingredients such as Bakuchiol.

Oil-based Bakuchiol products are typically heavier and more occlusive than their cream-based and serum-based counterparts. This makes them ideal for dry skin types that need extra hydration and protection from the elements. However, oil-based products can be difficult to spread evenly on the skin, and they may clog pores if used excessively. Cream-based Bakuchiol products are lighter and less likely to clog pores than oil-based products, making them a good choice for normal to oily skin types. They can be applied more evenly to the face than oils, but they may not provide as much hydration. Serum-based Bakuchiol products are the lightest of the three forms, making them a good choice for those with sensitive skin or who are concerned about clogged pores. They are also easy to spread over the face and can be used under makeup. However, they may not provide as much hydration as other forms of Bakuchiol. Bakuchiol Oil is expected to be the fastest-growing form of the product during the forecast period.

The Cosmetics sector is the largest application market for Bakuchiol. The demand for Bakuchiol in cosmetics has been on the rise owing to its natural properties, which make it an attractive ingredient in skin care products. In addition, Bakuchiol's anti-aging and anti-inflammatory properties make it a popular choice in cosmetics. The therapies sector is the second largest application market for Bakuchiol. The therapeutic use of Bakuchiol dates back to centuries, and its medicinal properties have been well documented. Bakuchiol is used in traditional Chinese medicine and Ayurveda for the treatment of various ailments such as skin disorders, respiratory problems, and digestive issues. The other applications market includes dietary supplements, food & beverages, and pharmaceuticals. Bakuchiol is increasingly being used as a dietary supplement owing to its health benefits. Additionally, Bakuchiol is finding use in food & beverages as a natural flavouring agent. The pharmaceutical industry is also exploring the potential use of Bakuchiol in the treatment of several diseases and disorders.

During the period covered by this estimate, the Bakuchiol Market in North America is anticipated to experience the highest growth rate overall. This can be linked to the presence of a significant number of Bakuchiol manufacturers in the region, in addition to the expanding demand for goods based on Bakuchiol coming from the cosmetics industry. Bakuchiol is predicted to see substantial expansion in Europe as a result of the increasing demand for natural and organic cosmetics in that region. This is one of the reasons why the market is expected to expand. Bakuchiol has a significant amount of potential in the Asia-Pacific area, particularly in light of the expanding cosmetics business in that part of the world. During the period covered by the forecast, it is anticipated that the market in Latin America and Middle East & Africa would expand at a substantial rate.

The key players in the Global Bakuchiol Market include- Cayman Chemical, Sytheon, Chengdu Mansite Bio, Chengdu Biopurify Phytochemicals and others.

● The Chinese government has included Bakuchiol in its list of ingredients that can be used in cosmetics. This move is expected to boost the production and export of Bakuchiol-based products from China.

● The most recent developments include the launch of a new Bakuchiol-based skincare line by L'Oreal and the announcement of a government-funded research project in the UK. These developments are likely to have a major impact on the future of the Bakuchiol Market, with more products and research becoming available in the coming years.

Segmentation of the Global Bakuchiol Market: 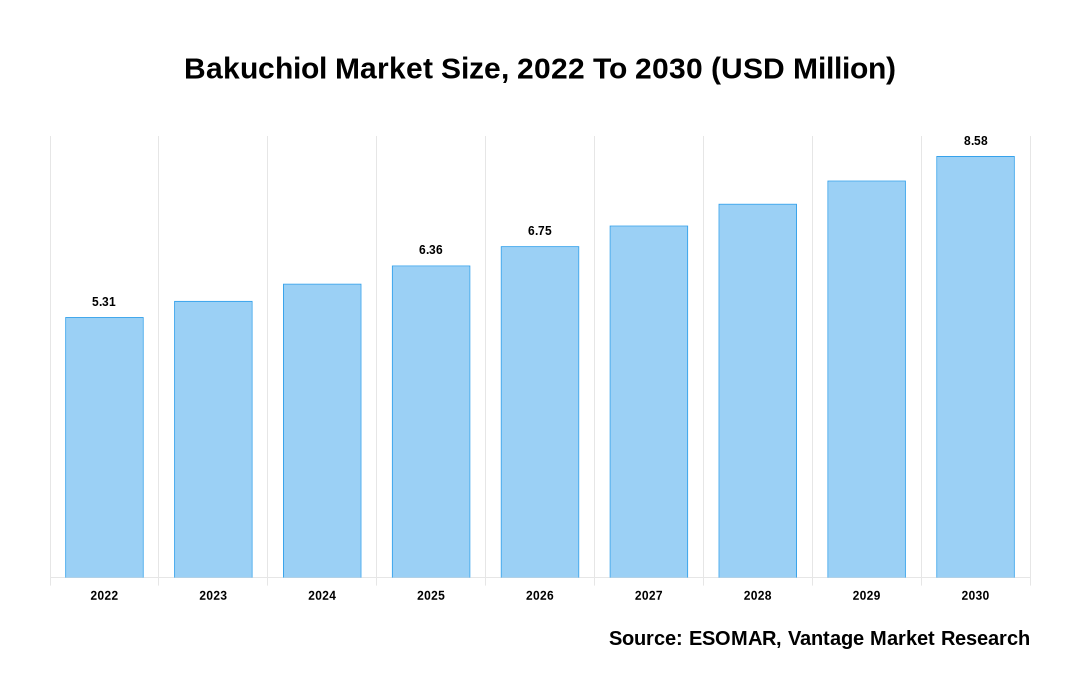 What is the global demand for Bakuchiol in terms of revenue?