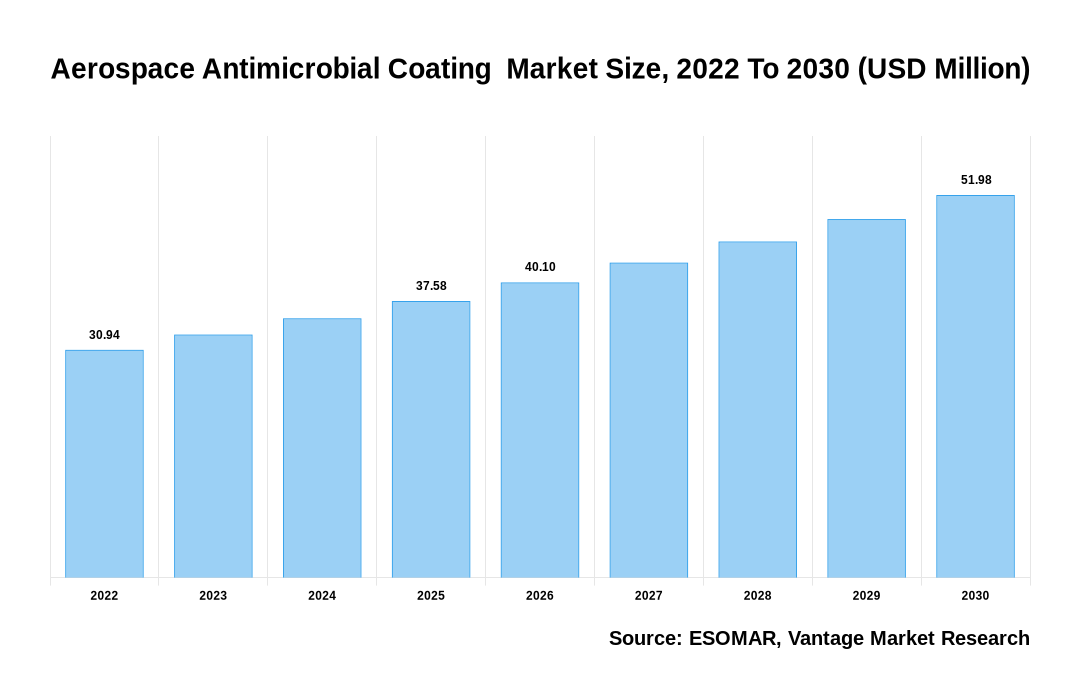 Global Aerospace Antimicrobial Coating Market is valued at in 2021 and estimated to reach a value of USD 46.5 Million by 2028 at a CAGR of during the forecast period, 2022–2028. Aerospace coatings play a critical role in protecting the aircraft from wear and corrosion. Of late, the desire for higher strength along with antimicrobial properties has invited research on new chemistries for aerospace applications. Antimicrobial coatings are one of the specialties being focused upon by researchers to prevent or control growth of microorganisms which are responsible for degradation of metals used in aerospace components. The term 'microleakage' describes the penetration/penetration depth of microorganisms where they can proliferate inside metal structures. Such microbial contamination is often detected by oil impregnation techniques, helium leak testing methods or bio-assays that measure biomass accumulation over time.

There are several factors that would increase demand for antimicrobial coating systems. The first is that the aerospace industry is targeting / improving their own / aircraft manufacturing facility clean rooms to 1,000 times cleaner than ISO 9 (Class 10,000). This would mean that any contamination introduced into these areas by workers, materials or equipment must be minimized.

Another factor which will contribute to the growth of antimicrobial coatings in aerospace applications is the upcoming changes for defense budget allocations, especially with respect to future combat aircraft programs. For instance, defense spending may shift towards space exploration and unmanned aerial vehicle technology while minimizing investments on conventional manned aircraft projects. As a result, there could be scaling down of operations in military airplane production facilities leading to reduced demand for new metallic parts from suppliers.

Global Aerospace Antimicrobial Coating Market is by Platform (Aviation and Space), Application (Aviation (Cabin Seats, Sanitary Facilities) and Space (Air Purification)), Fit (OEM and Aftermarket), Material (Silver, Copper), and Region. By region, Asia Pacific is projected to hold the dominance over the market and is also expected to grow at the fastest CAGR during the forecast period due to rapidly expanding flight size, increased military spending on defense aircraft, and rising number of space missions.

Some of the key players in the market are BASF (Germany), PPG (US), Sherwin Williams (US), AkzoNobel (Netherlands), Mankiewicz (Germany), Henkel (Germany), MAPAERO (France), Hentzen (US), Permagard (France), Hexion (US), Dunmore (US), and Polymer Technologies (US)

Aerospace Antimicrobial Coating Market Projected to Reach USD 46.5 Million by 2028
The Aerospace Antimicrobial Coating Market is expected to reach USD 46.5 Million by 2028, growing at a Compound Annual Growth Rate (CAGR) of 6.9% in between 2022 to 2028. Aircraft modernization agendas are strategically aligned with the necessary production abilities within production and generation...
Read More

What is the global demand for Aerospace Antimicrobial Coating in terms of revenue?