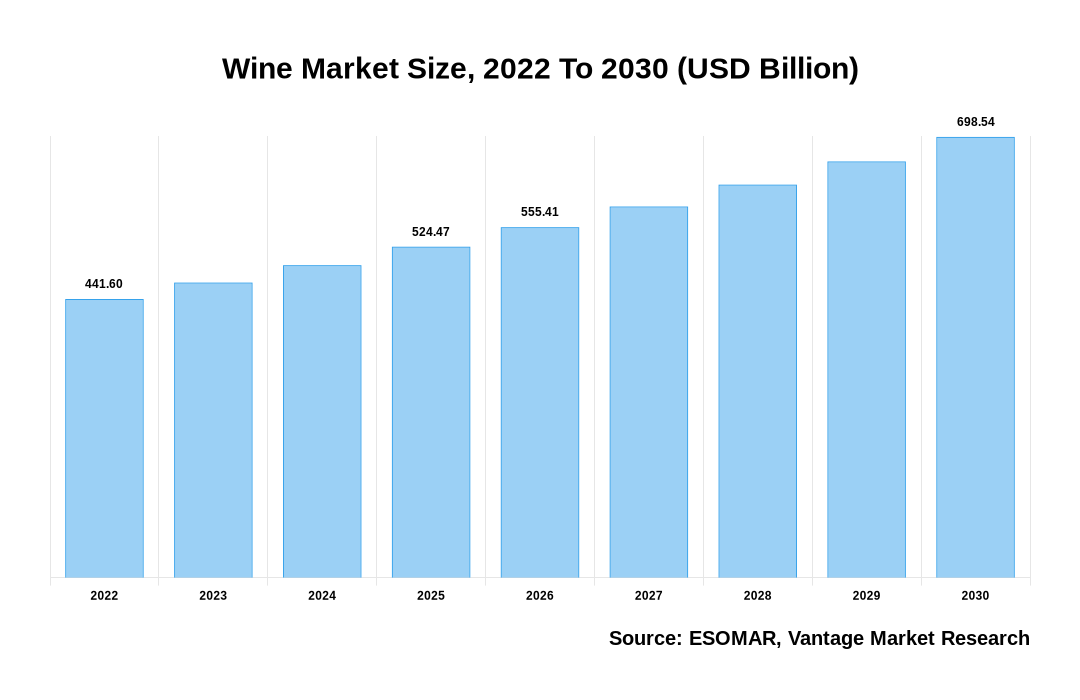 The increasing adoption of Wine among all the age groups from youngsters to the old age population across the globe is the major factor driving the growth of the market during the forecast period. The health benefits and the premiumization of Wine products together with the inventions in the flavor and the more progressive distribution networks universally are the other prime factors boosting the Wine market growth during the forecast period. Additionally, the Wine contains antioxidants, and when consumed that antioxidant fights the free radicals in order to avoid diseases like cancer. Furthermore, the increasing demand for Wine in developing economies such as India, and China is contributing to the growth of the market during the forecast period. Meanwhile, there have been several changes in the purchasing behavior of the consumers due to the covid-19 pandemic. Moreover, as the hotels, bars, and restaurants shut down or run on a limited capacity, the consumers are approaching food retailers as well as the online portals to purchase the product during the forecast period. The direct-to-consumer sales have also profited from this shifting of the consumer's preferences and have also reported an increase in the sales of Wine during the forecast period. Additionally, the young generation and working-class people in the developing economies are including Wine in their daily diet, parties, and accessional drinks which are expected to increase the demand for wines in the years to come. Social engagements, modernization, and the increasing adoption of western culture are some of the factors promoting alcohol socialization among consumers during the forecast period and will continue to grow in the coming years.

The table Wine segment is predicted to hold the largest share of the Wine market during the forecast period. Being easily accessible in retail shops, less expensive table wines often find preference among new consumers of the product which is expected to drive the growth of the table Wine segment in coming years. Moreover, the changing lifestyles, there has been changing in the consumer's preferences and alcohol consumption from hard drinks to mild drinks like beer, wine, and seltzers and thus consequently plays a prime role in the increasing demand for table Wine during the forecast period.

Based on the distribution channel

The off-trade segment is expected to acquire the largest share of the Wine Market during the forecast period. With the ongoing covid-19 pandemic situation, the off-trade distribution channel has witnessed more growth in comparison with the on-trade channel. Moreover, the corona lockdown propelled the demand for Wine for off-trade sales.

Europe acquires the largest share of the Wine Market during the forecast period. Moreover, Europe is the most established market for Wine along with several countries like Italy, Portugal, and France which hold the highest per capita Wine consumption every year during the forecast period. Additionally, one of the largest combined markets in Europe is France owing to the largest population and the high per capita consumption of Wine which is expected to drive the demand for Wine in coming years.

Asia Pacific region is the fastest-growing region during the forecast period. The Asia Pacific is the third in the ranking for the consumption of Wine in terms of volume, which is primarily driven by China, South Korea, and Japan during the forecast period. The Asia Pacific offers substantial potential owing to its largest consumer base, the favorable climatic condition for the cultivation of wine, particularly in China, and increase in disposable income which is predicted to drive the growth of the Wine Market in the coming years.

Wine Market to Reach Valuation of USD 599.5 Billion by 2028 - The Increasing Adoption of Wine Amid All the Age Groups Across the Globe is Driving the Market Growth
In terms of revenue, the Global Wine Market is probable to reach USD 599.5 Billion by 2028, growing at a Compound Annual Growth Rate (CAGR) of 6.20% from 2022 to 2028. The health benefits and the premiumization of Wine Market products together with the inventions in the flavor and the more progress...
Read More

What is the global demand for Wine in terms of revenue?