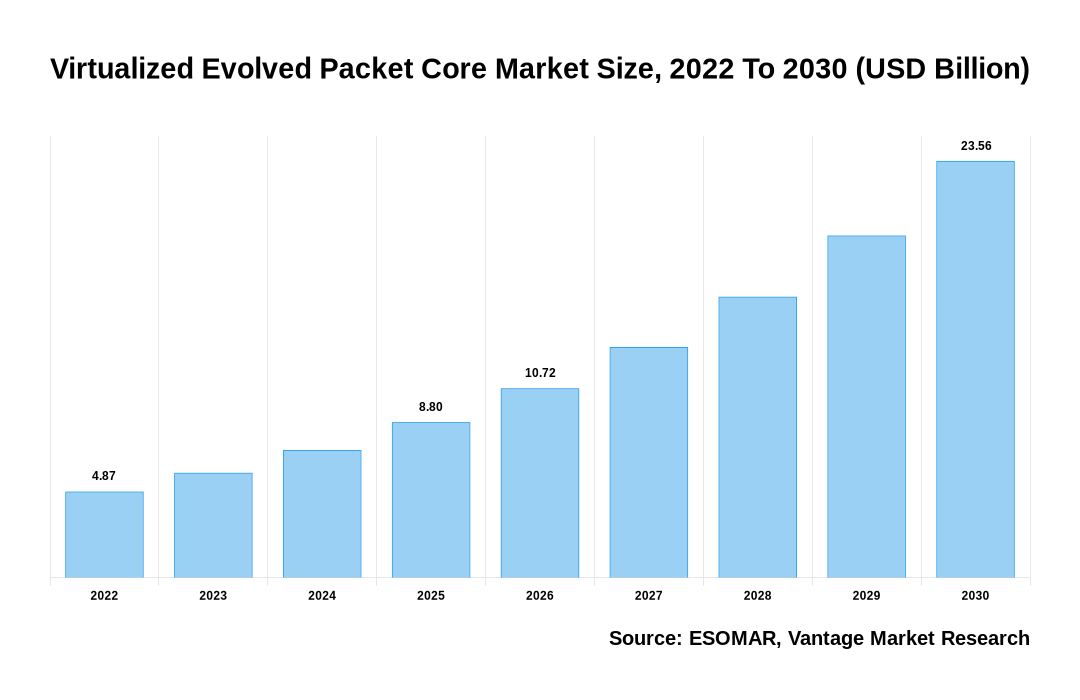 Global Virtualized Evolved Packet Core Market is valued at USD 4.1 Billion in 2021 and is projected to reach a value of USD 8.7 Billion by 2028 at a CAGR of 22.1% over the forecast period.

The key factors driving this market are rising demand for enhanced network performance and a lower cost of ownership for deployed network infrastructure. According to UNESCO, there has been a dramatic shift in the use of communication networks due to the 850 million students who are now studying and attending classes online and the several million workers who have suddenly moved to remote work. Europeans have been largely confined to their homes, leading to a roughly 50% increase in network traffic. One of the key drivers of mobile data traffic growth is the increasing number and variety of wireless devices connecting to mobile networks worldwide. The widespread availability of smartphones and the low cost of high-speed network services drive global mobile data traffic. For instance, GSMA Intelligence predicts that by 2025, smartphone penetration worldwide will have risen from 65% in 2021 to 80%. Ericsson forecasts that by 2025, 5G networks will carry 45 percent of all mobile data traffic. As a result, virtualized evolved packet core solutions are now essential for managing the explosion in mobile data traffic. A virtualized evolved packet core makes efficient management of mobile data traffic possible, which improves throughput, reduces network congestion difficulties, maximizes resource utilization, and raises service quality. According to a study by ABI Research, global business mobile data traffic is set to increase by the year 2023 by 16%.

One of the main factors that enhance the acceptance of virtualized evolved packet core solutions is the development of cellular network technology, which offers faster data speeds and lower latency. Consumer demand for video and business and consumer shifts to cloud services have been major drivers of the exponential growth in data volume. The widespread adoption of data-intensive applications like augmented reality (AR) and virtual reality (VR), as well as 3D and ultra-high definition (UHD) video content in consumer electronics and B2B communication systems, is a major factor driving demand for mobile data services. Increases in mobile data traffic can be attributed to the large amount of data transmitted through cellular networks. By 2025, 5G will account for almost half of all global internet traffic. This rapid adoption is thanks to its potential to enable extremely low-latency connections, making it ideal for remote healthcare services and autonomous vehicle applications.

Nevertheless, there are challenges ahead for mobile data traffic. One issue is that users increasingly use multiple devices and platforms to access online content, exacerbating network congestion. Another issue is that mobile devices increasingly use artificial intelligence (AI) capabilities and other cloud-based services, which require considerable bandwidth. The important reasons driving the growth of the virtualized evolved packet core market are the rising demand for broadband services across mobile networks, the commercialization of 5G networks, the deployment of IoT and agile networks, and the reduction in operational and capital expenditures. However, the expansion of the virtualized evolved packet core business has been hampered by several problems, including rising network security concerns and the economic slowdown induced by the COVID-19 pandemic. The adoption of IoT is expected to hamper the market’s growth shortly. The growing popularity of autonomous vehicles and increasing cyber-attacks are among the major challenges faced by the industry. Additionally, privacy concerns associated with data analytics are also restraining the growth of IoT.

Future of The Market

The major vendors in the market are Cisco Systems, Hewlett Packard Enterprise, IBM Corporation, Intel Corporation, Microsoft Corporation, NEC Corporation, and Samsung Electronics. These vendors are attempting to capitalize on the growing demand for their respective products by marketing their offerings as solutions that provide enhanced security, scalability, and performance. One of the key factors driving the growth of the Virtualized Evolved Packet Core market is the increasing adoption of virtualized environments. The trend toward virtualization is expected to increase over the next few years as organizations attempt to reduce costs and improve security. In addition, virtualization is also beneficial because it allows multiple applications to run concurrently on a single computer system. This enables organizations to reduce downtime and increase efficiency. Another important factor driving the growth of the Virtualized Evolved Packet Core market is the increasing demand for cloud-based services. Cloud-based services allow users access to applications and data from anywhere worldwide without installing software or configuring devices. Furthermore, many consumers view cloud-based services as more reliable than traditional software solutions because they are not subject to interruptions or outages caused by viruses or malware attacks.

The professional services segment is expected to grow at a CAGR of 19.5% between 2021 and 2028. The need for improved efficiency in various industries drives virtualized evolved packet core solutions adoption. The Consulting segment is expected to register the highest growth rate during the forecast period owing to the growing demand for customized solutions from various clients. The integration and Deployment Segment is likely to witness high growth owing to the increasing requirement for efficient and effective deployment of virtualized applications. The Training and Support segment is also expected to grow significantly due to the need for skilled professionals in this domain. The managed services segment is expected to be the fastest-growing segment, with a CAGR of 29.5% during this period. This growth is attributed to the increasing demand for managed services that provide flexibility and scalability for organizations' infrastructure needs.

Based on the End User

The telecom operators segment is expected to be the largest market for VEPCs, with a share of 53.3% in 2021 and 62.2% by 2028. This is due to their increasing emphasis on improving network resilience and performance. Enterprises are also increasingly deploying VEPCs to improve their data center efficiency and performance. The growth in the enterprise segment is expected to be due to the increased adoption of virtualized evolved packet core solutions for Enterprise networking.

The on-premises segment is expected to dominate the VEPC market in terms of revenue during the forecast period. This is due to the large size and scale of incumbent enterprises still relying on physical servers for their networking needs. However, the cloud segment is expected to grow faster than the on-premises segment due to its lower deployment costs and increased mobility options.

What is the global demand for Virtualized Evolved Packet Core in terms of revenue?