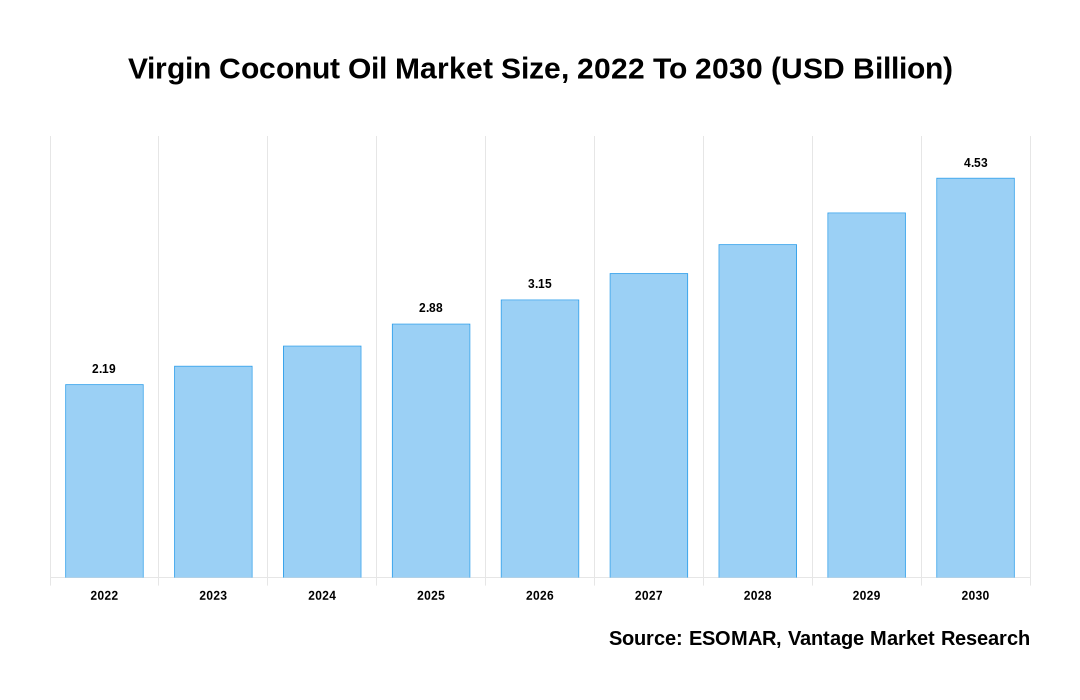 The Global Virgin Coconut Oil Market is valued at USD 2.3 Billion in the year 2021 and is expected to reach a value of USD 4 Billion by the year 2028. The Global Market is projected to grow exhibiting a Compound Annual Growth Rate (CAGR) of 9.7% over the forecast period.

The popularity of Virgin Coconut Oil medicinal uses is expanding, which has prompted a number of pharmaceutical companies to invest in the product. Virgin Coconut Oil is healthier than refined coconut oil since it is not processed and remains in its natural state. Its use in anti-HIV/AIDS drugs, Alzheimer's disease treatment and anti-cancer therapy is also on the rise. This is owing to its antibacterial and anti-inflammatory effects, which have been clinically verified. Additionally, rising demand as a functional ingredient in food and beverage applications, as well as rising public awareness of the oil's advantages, is likely to add to the market's phenomenal expansion.

There are several replacement oils that have similar nutritional benefits as Virgin Coconut Oil, such as virgin olive oil, sunflower oil, almond oil, canola oil, and others, which is expected to limit market expansion. The fortification of canola and olive oils by various manufacturers to keep their important elements has also diverted customer interest toward substitutes. Furthermore, Virgin Coconut Oil has a higher smoke point than the other oils, making it a superior choice for baking and frying.

Due to the rising use of Virgin Coconut Oil in food products due to its original flavor and scent, the food & beverage category is likely to increase over the market forecast period. The high smoke point and low melting point of virgin coconut oil, as well as its flavor, digestibility, and rancidity resistance, make it an ideal food ingredient. It's also used in baked goods and smoothies as a butter substitute. The oil's lauric acid promotes ketosis, which helps the body burn fat for energy while also lowering the risk of cardiovascular disease. As a result, the increasing use of this oil in a variety of food products is likely to propel the market forward.

Based on Distribution Channel

The Internet Retailing platform is becoming a popular medium for purchasing due to the quick availability of commodities and the benefits it provides, such as product information and the ability to transport items to consumers' homes. Furthermore, the growing penetration of numerous online portals in developed and developing regions, as well as an increase in the number of offers or discounts, motivate customers to buy Virgin Coconut Oil online. Furthermore, the internet sales channel has become a vital source of revenue for a number of firms due to its core characteristic of extending client reach. The coconut oil market is estimated to grow throughout the forecast period as a result of the aforementioned factors.

Asia Pacific acquired the largest market share during the year 2021 with a share of 38.50%. The market is expanding due to a greater acceptance of Virgin Coconut Oil in rising markets in the region, as well as an increase in coconut farms and strong local demand. This region is the most important contributor in terms of both production and consumption. The Philippines and India generate the majority of coconut raw oil. India's tremendous increase in coconut cultivation has resulted in increased Virgin Coconut Oil extraction. Furthermore, the Indian government has promoted the health benefits of this oil through a number of initiatives, all of which are expected to boost regional Virgin Coconut Oil Market growth. With rising global demand for virgin coconut oil, market participants are finding it challenging to close the gap between high consumer demand and supply. Several governments in the region are providing technical assistance to the players in order to help them increase their manufacturing capacities.

What is the global demand for Virgin Coconut Oil in terms of revenue?