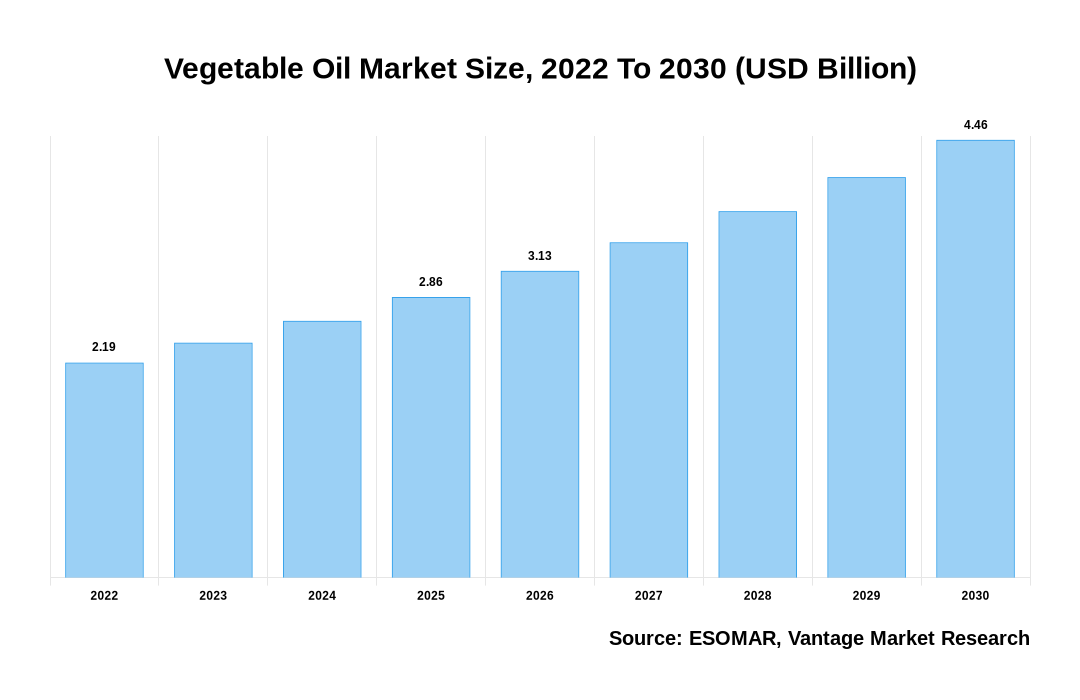 Global Vegetable Oil market is valued at USD 2.52 Billion in 2021 and estimated to reach a value of USD 3.73 Billion by 2028 at a CAGR of 9.5% during the forecast period, 2022–2028. Vegetable Oil is being used for various purposes including in the manufacture of soaps, biodiesel, cosmetics, insecticide and many other applications. Oil is one of the prime sources of energy which are renewable over a period of time. Its production has increased manifold due to increase in population and rise in per capita income after industrial revolution.

The world's population has increased manifold since 1950; it was about 2.5 billion in 1950 and crossed 7 billion in October 2011. The growth rate of population is increasing at a faster pace every year. As of 2021, the population has crossed 7.9 billion. In line with this, the demand for Vegetable Oil is also increasing across various domain such as cooking, food processing, and cosmetic and personal care, among others to meet the growing consumption.

The world is moving towards healthy lifestyle with increasing awareness among people about their diets. Vegetarian foods are gaining popularity all over the world as it contains fat content of plant origin. This is acting as a positive growth driver for the global Vegetable Oil market.

The global population has increased at a faster pace after industrial revolution, as people are moving towards urbanization. This has led to faster economic growth across the world which has also improved the standard of living. All these factors are acting as key growth drivers for the market. Countries like Malaysia, Indonesia, Thailand and Sri Lanka have emerged as popular destinations for the production of palm oil due to its low cost.

Higher standard of living in developing countries has led to significant change in food habits of people across Asia-Pacific, Middle East and Africa regions. People are shifting towards healthy diet, which is leading to increase the demand for processed food products. With this, there is increase in purchasing power of people who are demanding quality product while spending more on it.

By Type, Palm Oil to Dominate the Vegetable Oil Market

Palm oil, an edible Vegetable Oil derived from the fruit of palm trees. It is the most widely used form of Vegetable Oil globally and accounts for a quarter of all oils used in food manufacturing. Palm oil has also become one of the key ingredients in many commercial products (Cosmetics, Bio-fuels, Personal care products, cleaning agents, and many others) due to its effectiveness. For instance, palm oil is used in shampoos and soaps because of its cleansing abilities.

It is also added to manufactured foods like: cakes, biscuits, margarine and chocolate for flavor and texture (it prevents ingredients from clumping together), and increasingly for its health benefits. Substituting palm oil into the formulation of many products reduces costs by providing more processing stability, shelf life and appropriate melting properties than other oils or fats.

By packaging type, pouches are the most popular form of packaging across the globe in the household, personal care and edible oil markets. This can be attributed to numerous factors such as convenience of pouring, easy portability, versatility, and cost-effectiveness, among others. Pouches are an environmentally friendly and sustainable alternative to rigid bottles and cans, as well as bulk drums and barrels.

The biggest benefit of the pouch packaging is its cost effectiveness compared to other types of containers, which can be attributed to high production volumes during filling and sealing, high degrees of automation, low labor costs, and easy transport. Pouches are also an ideal choice for products where the consumer is willing to pay a little more for premium packaging like gourmet oils vs bulk containers.

Asia Pacific is the largest consumer and producer of Vegetable Oil. The region has strong presence of some of the key producers of palm oil and soybean oil such as China, India, Indonesia, and Malaysia. Wherein, Malaysia is the largest producer of palm oil. Apart from this, the region is housing over 60% of the global population. This translates to over 4.7 billion population to feed in the region. The population here is quite young, with average age of 28 years. This has opened numerous opportunities for the market players to engage in sports and other physical activities, which in turn increase demand for Vegetable Oil.

The region is witnessing a high growth of population. This has resulted in rise of food consumption by 4% each year. Growing disposable income – GDP per capita of countries such as China, India, Indonesia and Malaysia have been on an upswing due to continuous economic development. This has led to rise in disposable income, resulting in increasing consumption of packaged food products. Favorable climatic conditions– with the region being home to some of the key producers of Vegetable Oil, there are favorable climatic conditions for growth and production of vegetables within Asia Pacific.

What is the global demand for Vegetable Oil in terms of revenue?