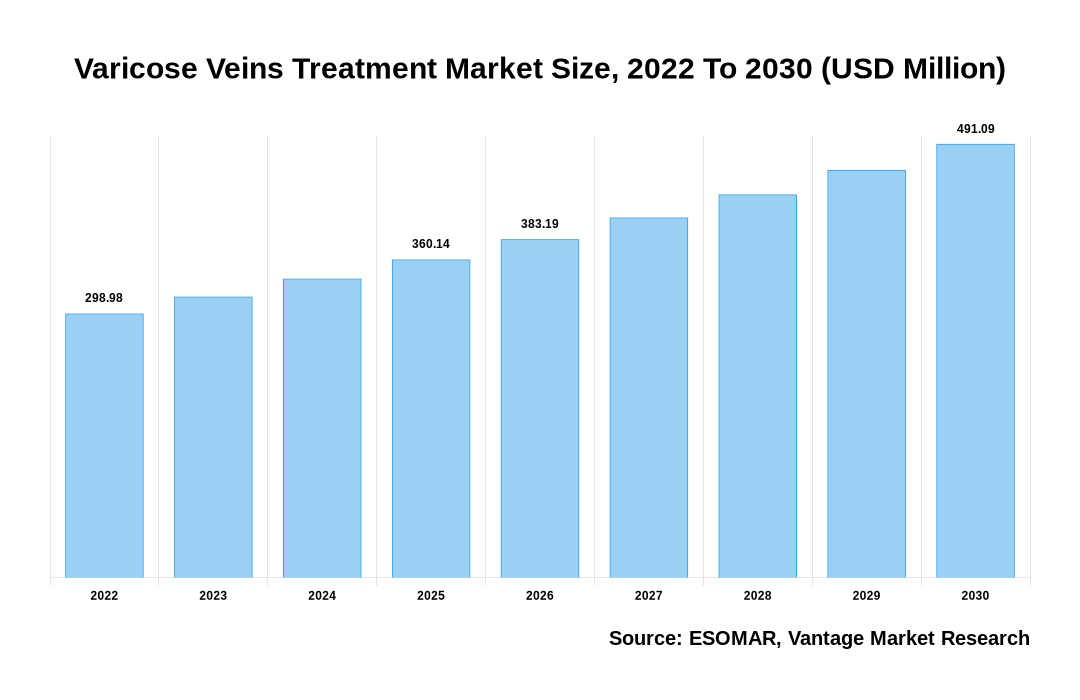 The Global Varicose Veins Treatment Market was valued at USD 281.3 Million in 2021 and is projected to reach a value of USD 410.4 Million by 2028. The Global Market is anticipated to grow to exhibit a Compound Annual Growth Rate (CAGR) of 6.5% over the forecast period.

Blood vessels that are abnormally dilated and weakened are known as varicose veins. These veins under the skin seemed to be a twisted, bloated cluster of blue or purple veins. Millions worldwide suffer from varicose vein disease, which often manifests as leg symptoms at age 40. Varicose veins result in venous stasis ulcers, phlebitis, thrombosis, venous bleeding, or fungal and bacterial infections. They are hazardous to health. The American Society of Vascular Surgery estimates that 20 to 25 million Americans have varicose veins, of whom 17 percent are men and 33 percent are women.

A thorough primary and secondary analysis of the Varicose Vein Therapy Market is conducted to identify the variables driving market growth and those impeding it. The market is expanding due to factors including the rise in the geriatric population, the prevalence of improved varicose vein treatment devices, occupations that enhance the need for varicose vein therapy, and global technical breakthroughs. Additionally, there are several prospects in the market for varicose vein treatments due to the rise in awareness and growth in new regions.

Based on Treatment Mode:

Based on Treatment Mode, the market is sub-segmented as Endovenous Ablation, Injection Sclerotherapy, and Surgical Ligation/Stripping. In 2021, the sub-segment that generated the most income was Injection Sclerotherapy. The dominant market share is attributed to this treatment's benefits, including reduced bruising and scarring, the absence of anesthesia, shorter hospital stays, straightforward follow-up procedures, and favorable reimbursement policies. Additionally, Medicare covers patients receiving Injection sclerotherapy in the United States. Every year, numerous organizations, including the British Association of Sclerotherapies (BAS), launch campaigns to promote awareness of and use of various treatments. As a result, the market is expanding due to a growing number of product approvals.

Based on Products, the market is sub-segmented into Ablation Devices, Radiofrequency Ablation Devices, Laser Ablation Devices, and Venous Closure Products. The Ablation Devices sub-segment is expanding steadily due to the rise in heart illnesses such as atrial fibrillation (AF), atrial flutter, and cardiac arrhythmias. As a result, various mid-to-large-sized businesses have increased their Research and Development (R&D) efforts in this sector. In addition, even smaller companies have changed their priorities and expanded their Research and Development (R&D) efforts, which has accelerated the development of new products (approvals & launches) and contributed to the expansion of the ablation devices industry. Another critical tactic that important companies have followed is acquisition. Due to the abundance of small- to medium-sized businesses, larger businesses often purchase smaller, emerging firms to reduce competition and boost profits.

North America is Projected to Continue Dominating the Global Market

With a revenue share in 2021, North America dominated the market. This is mainly caused by a sizable patient population that values appearance. Due to the apparent results and safety, many are eager to undergo cosmetic operations. The proof of the safety and effectiveness of laser treatments has contributed to lowering the stigma associated with cosmetic procedures and fostering societal acceptance of laser treatments, particularly among males. Including the American Venous Forum, the Society for Vascular Surgery in the United States has developed clinical care recommendations for treating varicose veins. These guidelines offer suggestions for treating chronic venous disorders based on the grading system. Communication between care and insurance providers is facilitated by grading the severity of the condition. For instance, a general practitioner can effectively convey the severity when sending patients to vein specialists. Depending on their severity, patients might be divided into various groups.

Varicose Veins Treatment Market to Reach Valuation of USD 410.4 Million by 2028 – Increasing Obese and Geriatric Population Drives the Market
In terms of revenue, the Global Varicose Veins Treatment Market is expected to reach USD 410.4 Million by 2028, growing at a Compound Annual Growth Rate (CAGR) of 6.5% from 2022 to 2028. The rise in varicose veins in women, obese people, and seniors will increase the demand for minimally invasive ...
Read More

What is the global demand for Varicose Veins Treatment in terms of revenue?