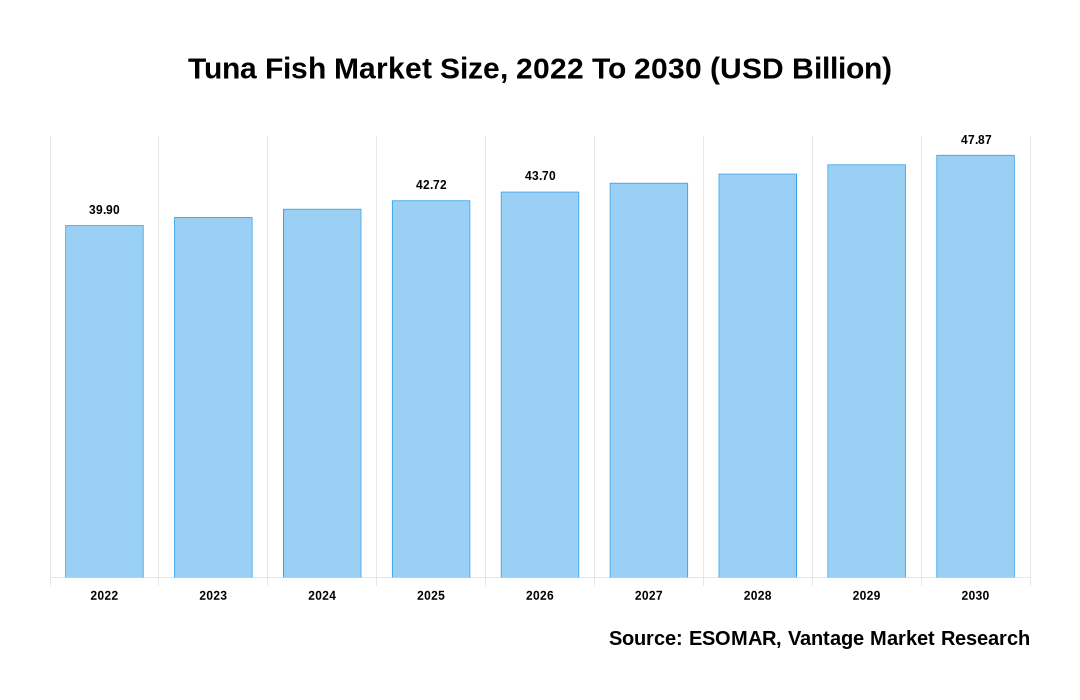 The Global Tuna Fish Market is valued at USD 39.8 Billion in the year 2021 and is projected to reach a value of USD 46.4 Billion by the year 2028. The Global Market is anticipated to grow exhibiting a Compound Annual Growth Rate (CAGR) of 2.6% over the forecast period.

Tuna is an important part of the marine ecosystem and one of the most economically valuable species. Skipjack, yellowfin, bigeye, Pacific, Atlantic, and Southern Bluefin tuna are all important species in the commercial tuna fishery. Companies have increased their investment in Research and Development (R&D) efforts in response to the growing demand for a healthy diet and sustainable fishing operations. Consumer demand has prompted the implementation of sophisticated tuna processing processes in response to changing dietary preferences. In recent years, the global consumption of canned Tuna Fish has exploded. Tuna in a can is a popular low-cost protein that is easy to store and does not require refrigeration. It is a convenient product to export because it requires little to no refrigeration, which is a benefit that promotes demand for canned tuna products in both developed and developing countries. The substantial increase in the working population boosted demand for processed, ready-to-cook, ready-to-eat goods.

Due to factors such as environmental concerns and dairy allergies, a large section of the world's population has become vegetarian, significantly impacting meat and seafood sales in many places. Because of the growing popularity of plant-based foods among customers, the number of plant-based meat producers has increased. Even though demand for seafood continues to rise, sustainably produced plant-based seafood can help to maintain biodiversity and reduce overfishing, which is why a major corporation like Nestle S.A. is introducing plant-based tuna to the market. Market participants such as Beyond Meat and MorningStar Farms are investing in vegetarian alternatives to typical meat products as well as developing a diverse vegan meat product line. As a result, customers' shift to plant-based tuna is likely to stifle Tuna Fish industry growth in the future years.

The most popular canned tuna species is skipjack tuna. According to Asia Pacific - Fish Watch, skipjack tuna account for more than 70% of total tuna captures in the Western and Central Pacific, and about half in the Indian Ocean. Skipjack also has a modest cholesterol content and is high in low-fat protein and salt, both of which aid plant growth. Yellowfin tuna is becoming increasingly popular among customers due to its rich flavor and excellent texture. The species is predominantly sold canned and frozen as plate-sized small pelagic fish in the Philippines and Indonesia.

Canned tuna is the most popular product category, owing to growing awareness of its health benefits and ease of preparation. It is likely to maintain its dominance during the forecast period. Omega-3 fatty acids included in canned tuna help to lower blood pressure, cholesterol, dementia, and inflammatory diseases. Furthermore, the huge variety of products accessible on the market, ranging from basic and unseasoned products to prepared, grilled, and marinated products, aids the segment's growth. Fresh tuna is expected to grow greatly due to the rise of Asian restaurants around the world, which has stimulated interest in it and its consumption in a number of ways.

Europe dominated the Global Tuna Fish sector in 2021, with a market value of USD 12.9 billion. The region's rapid expansion is fueled by high per capita consumption of fish and seafood, as well as the presence of well-organized seafood industry. Customers in the region have been leaning toward nutritious and functional meals since COVID-19, which provide health benefits for busy and active consumers. Companies are focusing their efforts on addressing the growing demand for useful things from customers. In September 2021, for example, John West, a Thai Union Group brand, launched a nutrient-dense canned tuna variety in UK stores. Energy, Heart, and Immunity are the three functional flavors in the product range, which are aimed at young consumers looking for tasty and practical dietary options.

Tuna Fish Market to Reach Valuation of USD 46.4 Billion by 2028 - The Positive Health Benefits Gained from Tuna Fish and Environmental Sustainability are the Key Factors to Generate Revenue from the Tuna Fish Market
In terms of revenue, the Global Tuna Fish Market is expected to reach USD 46.4 Billion by 2028, growing at a Compound Annual Growth Rate (CAGR) of 2.6% from 2022 to 2028. The growing demand from consumers for healthy food and increasing health concerns obtained from a healthy diet is driving the T...
Read More

What is the global demand for Tuna Fish in terms of revenue?