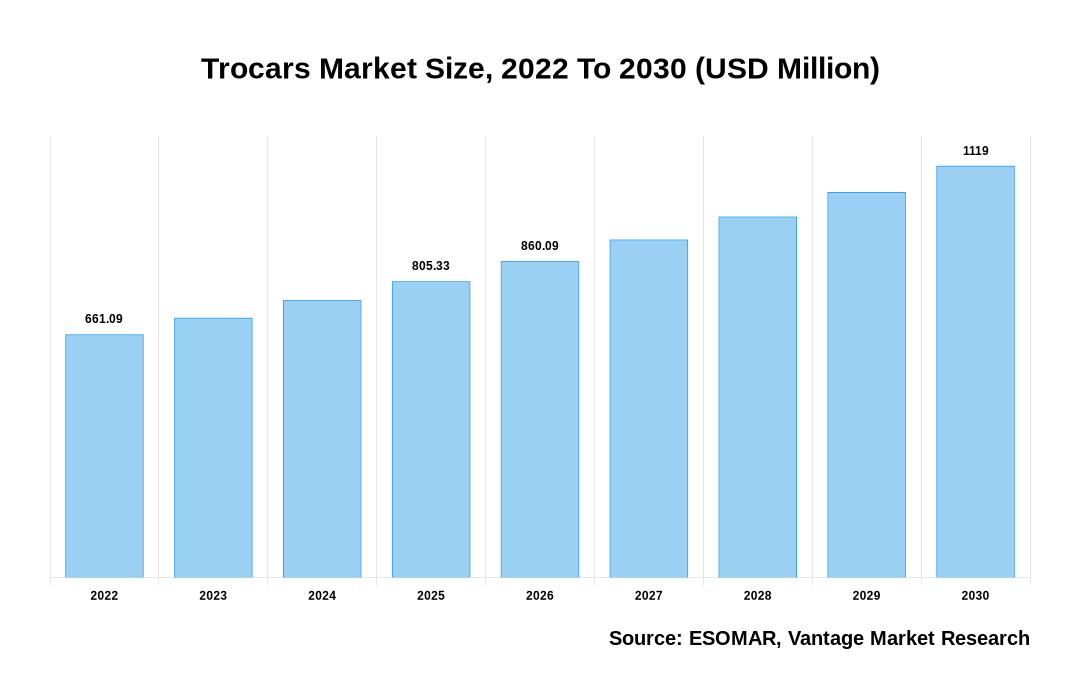 The trocar is a medical made up of an awl, a cannula, and a seal and is placed through the abdomen during laparoscopic surgery. The trocar performs functions such as a portal for the subsequent placement of other instruments like graspers, scissors, staplers, etc. Moreover, laparoscopy or minimally-invasive surgery, has changed the world landscape completely because of the benefits that this procedure offers which includes minimization of trauma, quickened pace of recovery, and smaller incisions, all of which lead to better patient outcomes, which have contributed to the growing popularity of laparoscopic procedures. This, in turn, resulted in the growing demand for specialized equipment for minimally-invasive procedures, including Trocars, fuelling the demand for Trocars in the forecast period. In addition, the use of minimally invasive surgeries in some cases of gynecological problems as it allows the doctor to get a more detailed internal view of the pelvic area is growing the demand for the Trocars market in various application areas. The widening base of the elderly population is leading to increased demand for surgeries. This, in turn, is growing demand for the Trocars market in the coming year.

The Disposable Trocars were the most preferred in the forecasted period.

The general surgeries segment is estimated to hold the largest share in the market during the forecast period.

The general surgery sector is anticipated to account for the biggest market share. The large share of this segment is due to the rising number of bariatric and hernia treatment procedures, rising number of obesity and appendicitis cases, lesser healing time when compared to traditional operations, minimally invasive surgeries are becoming more popular. Laparoscopic gynecologic surgeries are now being practiced widely due to their several benefits such as precise and detailed view of the pelvic area, low chance of getting post infections compared to conventional surgeries, and rapid healing.

The Asia Pacific is anticipated to register the highest growth during the study period.

The Asia Pacific is anticipated to witness a high growth rate during the forecast period due to an increase in the development of health care facilities and infrastructure, and increased investment by leading international hospital chains in emerging countries such as China, India, South Korea, and Japan. In addition, the rising preference for minimally invasive surgeries over conventional open surgeries is likely to propel the growth of the Asia Pacific market during the forecast period.

North America dominates the Trocars market due to rising preference for laparoscopic surgeries to open surgeries and growing competition, increasing awareness regarding the benefits of minimally invasive surgeries and laparoscopic procedures, well-established health care infrastructure, high per capita health care expenditure, and increasing healthcare expenditure in this region. In addition, most of the population in Canada and the United States are insured, which enables them to obtain these procedures at subsidized rates. As a result, North America is predicted to have strong growth throughout the projection period.

Some of the major key players in the Trocars Market are Medtronic (Ireland), Ethicon (US), B. Braun (Germany), Applied Medical (US), Cooper Companies (US), Teleflex (US), CONMED (US), LaproSurge (UK), Purple Surgical (UK), and GENICON (US).

Trocars Market is segmented as follows:

Trocars Market is tabulated as follows:

What is the global demand for Trocars in terms of revenue?