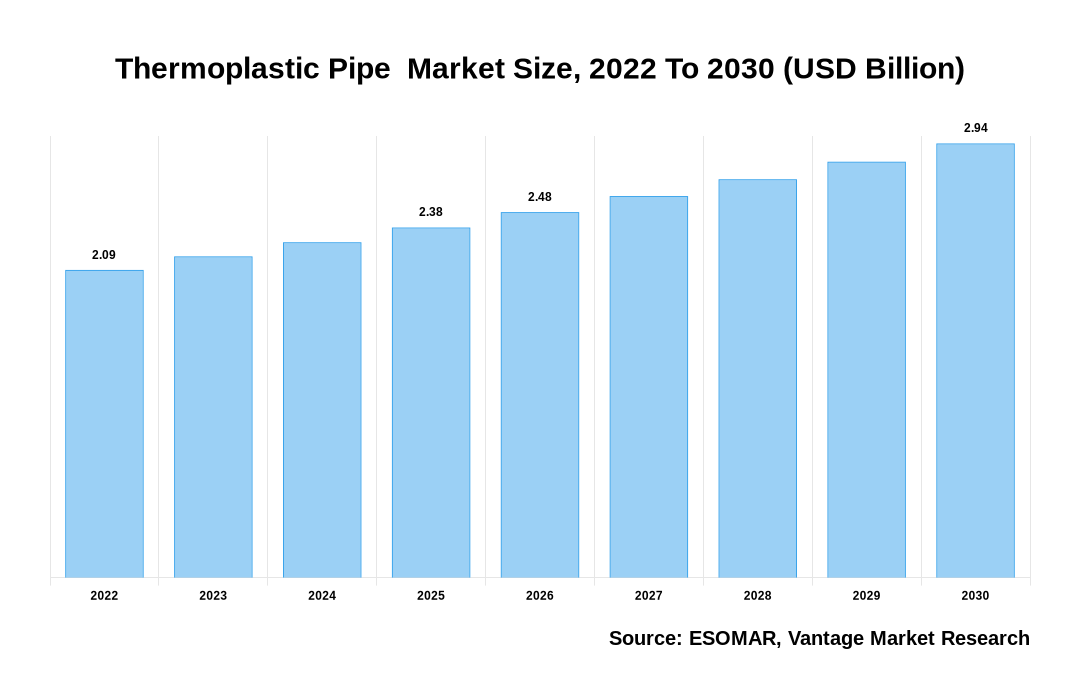 Demand for Thermoplastic Pipe is expected to grow 4.5% during the forecast period. In developed countries such as North America, Europe and Japan, where plastic pipe demand has been growing at an annual average rate of 10-15%, the slowdown in growth rates is due to more cautious economic prospects rather than any change in consumers' preferences. This provides opportunities for suppliers from emerging economies such as China, India, Brazil, Mexico, and South Korea. In addition to market expansion on the part of local manufacturers, international companies are also investing in new production facilities in emerging economies.

PVC accounts for the largest share in global Thermoplastic Pipe line market. However, due to the stringent environmental regulations and public opposition to using PVC for piping applications, polyethylene is expected to witness above average growth during the forecast period. Polypropylene is also expected to grow at a significant rate as it offers high chemical resistance and is lightweight as compared with other alternatives such as metal pipes. Moreover, its usage is expected to increase in countries such as India and China that have banned the use of PVC for pipe applications.

Industrial plants, often located far from the coast, are using increasing amounts of oil and gas. The transportation of energy sources is generally carried out via pipelines. For better corrosion protection offshore pipelines are now increasingly being used which consist of thermoplastic composite materials. Due to the low weight compared to steel pipes, they reduce the construction costs per unit length significantly. In addition, this material offers a good attenuation against corrosion in aggressive media due to its organophilic character. Pipeline systems made of polyethylene (PE) or polypropylene (PP) are available on markets with diameters up to DN1600 (40") or DN2000 (50"). These products are heat-resistant up to 120°C/248°F and available in black (PE) or grey (PP).

The demand for the reinforced Thermoplastic Pipe s (RTP) is growing in both urban and rural areas. The RTP has been used lately to lay new pipelines in different parts of the globe. The main reason for this is that these pipes can be used as alternatives to those made of concrete. The RTP has the following characteristics: resistance to corrosion, a long lifespan, light weight and ease of installation, among others. These water/drainage pipelines are installed in rural or urban areas where there is a high demand for drinking water. Although it is not widely known, this type of pipe was patented by a Mexican company back in 1994. It has since been used in various countries such as Cuba, Guatemala, Germany, Mexico and Malaysia, among others. In most cases there have been savings of between 15% and 20%.

Asia Pacific is the Largest Consumer of Thermoplastic Pipe s

Asia Pacific has been the largest consumer of Thermoplastic Pipe s, accounting for more than half of global consumption due to rapid urbanization and increase in number of housing units. The high growth was driven by China (29%) while other countries like India (21%) also contributed significantly towards the regional growth. India is expected to represent considerable potential in the forecast period because of increasing investment in infrastructural projects under "Make In India" initiative. Government initiatives like 'Housing For All', 'Swachh Bharat Abhiyan' and 'Smart Cities Mission' has led to the development of housing, sanitation & urban infrastructure sectors which is expected to boost TPE production in plastics processing industry.

Indonesia is the largest producer of polyethylene (PE) pipe followed by Vietnam, China, Malaysia and Thailand. Majority of PE pipes are produced by using extrusion technology while some producers use blow molding or injection molding process. Indonesia is expected to be one of the largest consumers of PE pipe on account of growing infrastructure projects like toll roads, water pipelines and ports. Some manufacturers have launched various grades under PE pipe category such as high-density polyethylene (HDPE), ultra-high molecular weight polyethylene (UHMWPE) and linear low-density polyethylene (LLDPE).

The Thermoplastic Pipe is Segmented as Follows:

What is the global demand for Thermoplastic Pipe in terms of revenue?