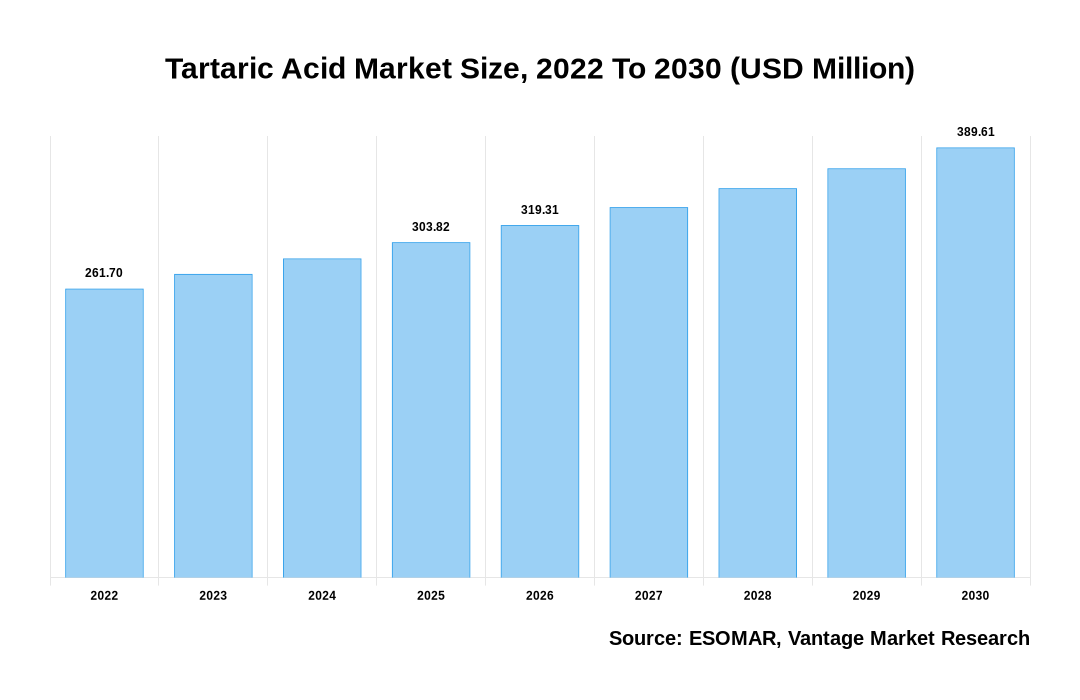 In 2021, the global Tartaric Acid market is valued at USD 249.86 Million and is projected attain a value of USD 306.03 Million by 2028 at a CAGR of 5.2% during the forecast period, 2021–2028. Tartaric Acid is an organic compound that occurs naturally in many plants, which can be purified from wine lees. It is the most abundant non-volatile acid in grapes, being behind only acetic acid in concentration. The two other primary acids found in wine are citric and malic acids. Tartaric Acid can also come from cream of tartar which is a byproduct of refining of white refined sugar (similar to table sugar). It can be produced as well artificially but it was more widely obtained from this natural source before synthetic production took over since it took less labor intensive to extract Tartaric Acid from cream of tartar than it was to extract it directly out of grape wine.

The global Tartaric Acid market is segmented into source, type, application. By source, it is grapes & sun-dried raisins, maleic anhydride. Based on type, natural and synthetic. On the basis of application, they are food & beverages, pharmaceuticals, cosmetics & personal care products)

The use of Tartaric Acid for food applications has increased significantly during past decades due to its low toxicity level and high reliability as a food additive. The worldwide production of Tartaric Acid is around 370'000 tons per year, with about 50% being used in winemaking. Natural Tartaric Acid represents 60% of all Tartaric Acid produced every year. The remaining 40% are synthetic racemic mixtures (DL-Tartaric Acid) which are often used in the food industry to improve physical parameters like flowability or crystallization of powdered products.

Today about 150'000 tons Tartaric Acid is obtained annually from grape by-products. More than half of this amount is extracted with hot water (hot-water process), whereas 15% is produced by solvent extraction and only 30% of natural Tartaric Acid originates from crushed grapes (cold-press method). The main drawback of the cold-press method is that it uses large amounts of water for the fermentation process.

Food and Beverage Industry is Dominating the Tartaric Acid Market

Tartaric Acid is used in food and beverage industry on large scale due to its wide range of applications. It is used in coagulation process of cheese making and it is acting as a natural preservative for fruits, vegetables, wines and vegetable oils due to its antioxidation property. As an additive, it is used in the preparation of calcium remineralization agent, emulsifier or stabilizer.

Tartaric Acid has many beneficial effects on human health which are being exploited by food industry at large scale to improve products quality and production efficiency. For example, Tartaric Acid helps to control wine aging process without losing aroma properties or having negative effect on color intensity. Besides this property, it may help to reduce the risk of renal stone formation through its ion-exchange potential power for uric acid. At the moment, only calcium tartrate is used in pharmaceutical industry due to its antirheumatic and kidney stone control properties. In addition, it has been shown that Tartaric Acid can reduces the risk of cardiac hypertrophy by influencing ion transport across cellular membrane resulting in cardioprotective effects.

Asia Pacific is the largest Tartaric Acid market due to high population growth, well-established healthcare and food industry. In facts, it is the largest producer of grapes and other sources required for obtaining Tartaric Acid naturally. In addition to this, the region has well-established food processing industry, which is also expanding at an exponential CAGR and is projected to contribute heavily to the well-being of the industry in the years to come.

In the recent years, the industry has been witnessing a slowdown due to fluctuating raw material costs and economic conditions. However, with increasing concerns about obesity and heart related diseases worldwide, there is a definite shift in demand from synthetic to natural Tartaric Acid. This trend may result in an upswing of the industry going forward. Moreover, cheap labor cost contributes heavily to the overall expenses incurred by manufacturers based in this region.

Producers of Tartaric Acid are increasingly focusing on strengthening their distribution networks to increase market penetration. Although, price fluctuations are expected during the forecast period, manufacturers are still likely to invest heavily in R&D due to changing demands of consumers for natural Tartaric Acid.

The Tartaric Acid is Segmented as Follows:

Tartaric Acid Market to Reach Valuation of USD 306.03 Million by 2028 - Rising Wine Industry is Generating Huge demand the Tartaric Acid Market
In terms of revenue, the Global Tartaric Acid Market is expected to reach by 2028, growing at a CAGR of from 2022 to 2028. Wine industries are growing globally due to high demand from the market. Tartaric acid is the main component as it influences the tastes, color, and odor of the win...
Read More

What is the global demand for Tartaric Acid in terms of revenue?