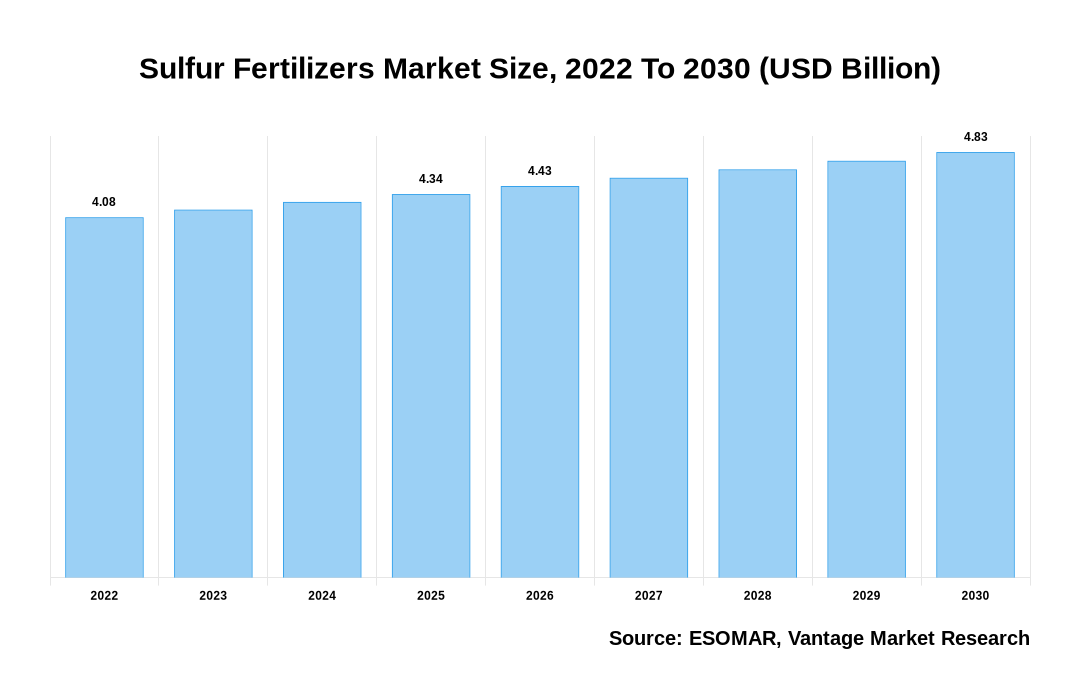 Global Sulfur Fertilizers Market is valued at USD 4.71 Billion in 2021 and estimated to reach a value of USD 5.52 Billion by 2028 at a CAGR of 2.2% during the forecast period, 2022–2028. From the last few years, the Global Sulfur Fertilizers Market has been witnessing a tremendous growth due to increasing demand from end users such as producers of major crops and horticultural products. In addition, government initiatives around the world encouraging efficient use of fertilizers have fostered the growth of this market over the years. In the next few years, this market is expected to grow further due to the rise in demand for Sulfur Fertilizers from emerging economies such as China and India.

In the past, demand for agricultural products has been steady. People were farming and growing what they needed to survive and little else. Nowadays, there is a bigger demand than ever before in history and it is increasing at an alarming rate. This increase stems from the development of cities all over the world bringing with it many different socioeconomic changes that result in an increased demand for food, clothing and shelter.

Most countries in the Western hemisphere have experienced a dramatic increase in urbanization over the last century. From 2011 to 2021, the percentage of people living in cities rose from 35% to 62%. As more people migrate into the cities, less land is used for agriculture and agricultural products become scarce. There are many reasons why people choose to move into the cities. This reduced the total arable land and put pressure on existing resources. As a result, the global market has started witnessing increased pressure on farmers to meet the growing demand for agricultural output. In line with this, they have started using all kind of fertilizers including Sulfur Fertilizers to meet the declining percentage sulfur in soil and improve the crop yield.

The majority of, if not all, industrialized countries have been trying to find ways to minimize or even reduce air pollution. The problem with air pollution is that it can affect both the environment and human health. One of the main causes of environmental problems such as acid rain and climate change is due to hazardous gases which are released into the atmosphere. There are many types of hazardous gases but sulfur dioxide and its compound, sulfate, is widely recognized as one of the main causes of acid rain and climate change. Sulfur dioxide is released into the atmosphere when fuel containing sulfur are burnt. Sulfate is formed when sulfur dioxide reacts with water vapor in the air.

Global Sulfur Fertilizers Market has been segmented on the basis of type, crop type, and region. Based on type, it is divided into elemental S (Sulfur) and sulfate. The sulfate segment accounted for more than half of the market in 2020, whereas elemental Sulfur Fertilizers are expected to grow at a faster rate during the forecast period. moreover, sulfate fertilizers have been widely used due to their high efficiency. In terms of crop type, the market has been segmented into cereals & grains, fruits & vegetables, and others.

Some of the major players in the market include Yara International ASA (Norway), Nutrien, Ltd. (Canada), ICL (Israel), The Mosaic Company (US), and K+S Aktiengesellschaft (Germany).

Sulfur Fertilizers Market has been segmented as follows:

Sulfur Fertilizers Market has been tabulated as follows:

Sulfur Fertilizers Market Projected to Reach USD 5.52 Billion by 2028
The Sulfur Fertilizers Market is expected to reach USD 5.52 Billion by 2028, growing at a Compound Annual Growth Rate (CAGR) of 2.2% between 2022 and 2028. Conventional and traditional agriculture activity has led to soil deterioration over time. Today the soil which is used for agriculture lacks th...
Read More

What is the global demand for Sulfur Fertilizers in terms of revenue?