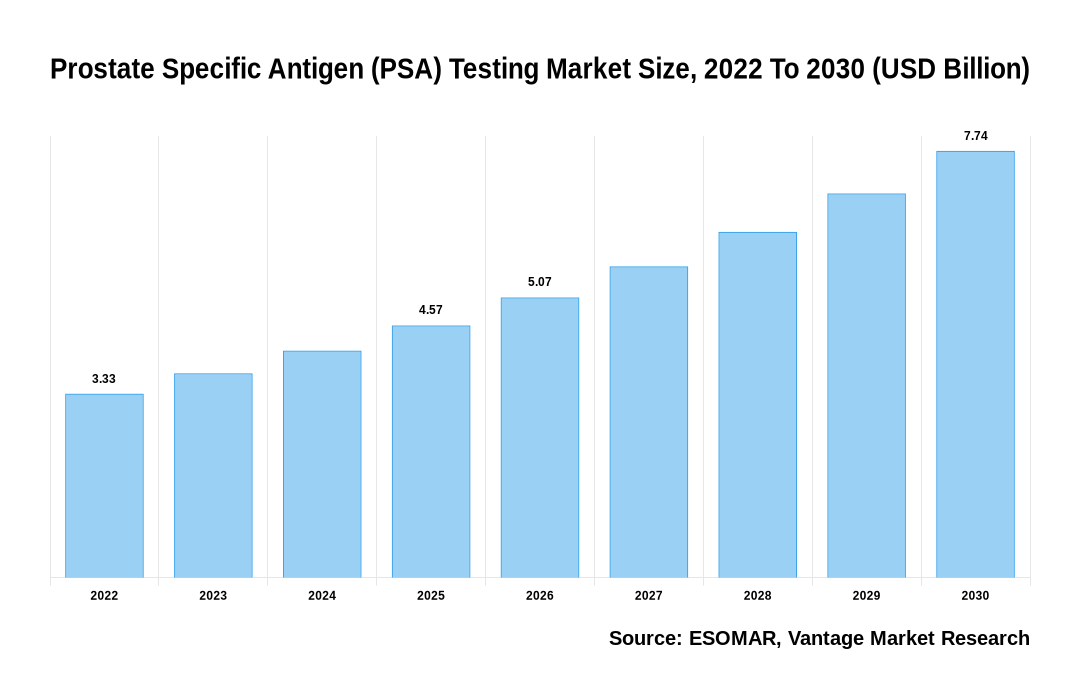 Global Prostate Specific Antigen (PSA) Testing market is valued at USD 3.12 Billion in 2021 and is projected to attain a value of USD 5.83 Billion by 2028 at a CAGR of 11.2% during the forecast period, 2022–2028. During the forecast period, technological developments in diagnostic tests are expected to boost market expansion even further. Researchers are currently studying the use of Artificial Intelligence (AI) to identify prostate cancer, according to the National Cancer Institute. Artificial intelligence (AI) algorithms are utilized to identify worrisome spots seen during an MRI scan that require biopsies to confirm the presence of cancer cells. Artificial intelligence methods are also being tested in order to improve biopsy sample analysis so that more efficient and accurate results may be provided.

Another factor that is expected to fuel the expansion of the prostate cancer diagnostics market in the near future is the increasing number of new market entrants. In comparison to standard PSA testing, this device is predicted to provide very sensitive test findings. As a result, increased investment by new entrants is likely to considerably fuel growth. The exorbitant expense of the tests, on the other hand, is expected to stifle growth.

Owing to the growing senior population, the market for prostate specific antigen testing is booming. Increased public awareness about the benefits of prostate cancer screening, technological advancements in testing and treating prostate cancer, and a variety of reimbursement policies for prostate cancer treatments in various developed and developing regions are all influencing the growth of the prostate specific antigen market. According to the 2017 National Population Projections from the United States Census Bureau. By 2030, all baby boomers will be over 65, implying that one out of every five residents will be retired. This reflects the increasing number of the geriatric population.

False-positive or False-negative results of PSA

Owing to false-positive or false-negative PSA test findings, the prostate specific antigen testing market is facing certain difficulties. In addition, most of these tests, such as PSA Screening, have several adverse effects, such as difficulty passing urine, effects on bowel function, erectile dysfunction, and frequent aches, which hampered the expansion of the Prostate Specific Antigen Testing market. Higher technological advancements that result in more streamlined and accurate results in tests like the Prostate Health Index (phi) may slow the growth of the PSA testing industry unless the way the tests are handled changes.

Due to an increase in the frequency of prostate cancer, the preliminary test category is likely to hold the biggest market share over the projection period. The American Institute for Cancer Research claims that the widespread availability of PSA screening has aided early detection and treatment, resulting in higher survival rates. PSA testing discover previously undetected and tiny lesions that may or may not progress to a more advanced stage of cancer. Most men over the age of 50, as well as those at risk of acquiring the disease, should get these tests since they help diagnose the disease before serious symptoms arise.

Owing to the high prevalence of the condition and the rise in government programs to aid early diagnosis, North America held the biggest market share in 2021. The National Cancer Institute, for example, has developed various projects to improve early detection and treatment research. Cancer Biomarkers Research Group is one of their programs that promotes biomarker research. Similarly, the organisation oversees the Early Detection Research Network (EDRN), a collaborative network of privately financed and government-supported researchers dedicated to the identification and validation of cancer biomarkers.

What is the global demand for Prostate Specific Antigen (PSA) Testing in terms of revenue?