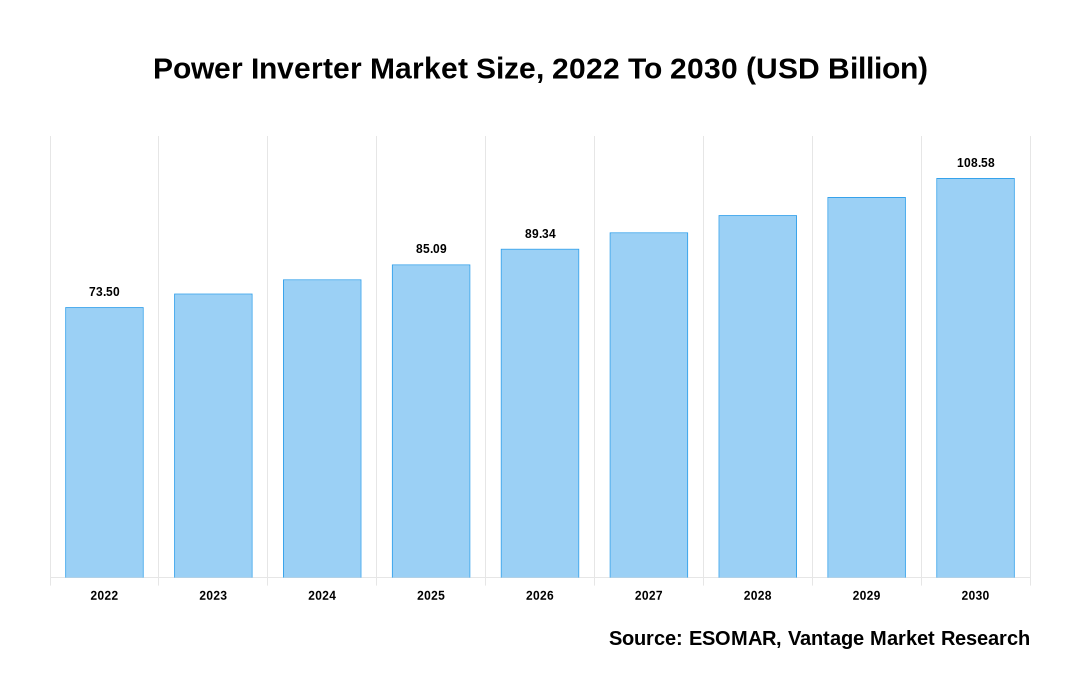 The Global Power Inverter Market is valued at USD 70.5 Billion in the year 2021 and is projected to reach a value of USD 95 Billion by the year 2028. The Global Market is anticipated to exhibit a Compound Annual Growth Rate (CAGR) of 5.1% over the forecast period.

An electrical system that transforms direct current (DC) from solar panels, batteries, or high voltage DC transmission lines to alternating current (AC) is known as a Power Inverter (AC). It is used to power machines, equipment, and other electrical appliances in both household and commercial settings. In comparison to traditional generators, inverters are often smaller, lighter, and more energy efficient. The Power Inverter industry is currently being driven by a number of favorable aspects. Technological advancements have led to portable inverters that can be used to charge cell phones and tablets while commuting, boosting the industry's growth. Motor drives are becoming more popular around the world as people become more reliant on electronic devices.

The majority of the population is now reliant on electronic equipment and devices, such as air conditioners, televisions, computers, and refrigerators, as a result of increasing electrification and fast urbanization. It has resulted in a significant increase in the need for Power Inverters to provide an uninterrupted electricity supply as well as a reliable backup option in the event of a power outage. Furthermore, inverters produce no emissions when generating energy and are significantly quieter than traditional generators. Manufacturers in the sector are investing in research and development to develop new technologies that will improve the features of these inverters. They are both noiseless and environmentally favorable. They produce no CO2 and do not require the gasoline that generators do. The Power Inverter is quite expensive and has a relatively short lifespan. These issues may limit Power Inverter expansion. If the battery degeneration is severe, the inverters cannot be used continuously. The market for Power Inverters has several issues.

On the basis of Application, the market is segmented into Motor Drives, Uninterruptible Power Supply (UPS), Rail Traction, Wind Turbines, Electric Vehicles/Hybrid Electric Vehicles (EVs/HEVs), Solar PVs and Others. In 2021, the motor drive segment dominated the Global Power Inverter Market. This is due to the increased popularity and adoption of motor drives around the world. Motor drives account for approximately 45% of total electric energy consumption across all electric appliances. The increased efficiency of motor drives has fueled this segment's growth in the Global Power Inverters market.

Based on End-Use Sector:

Asia Pacific is projected to acquire the largest market share during the year 2021 with a share of 38.4%. The electric vehicle Power Inverter Market is led by Asia-Pacific. Electric vehicle sales in China are increasing at a rapid rate. The epidemic had a negative impact on the world economy, yet despite this, electric car sales in China soared. China's government intends to quadruple the rate at which electric vehicles are produced and sold in the country. These government promises, as well as growing public interest in electric vehicles, are luring global vehicle manufacturers to set up manufacturing in China, bolstering the country's Power Inverter industry. Japan's automobile industry is one of the most well-known in the world, with powerful automobile manufacturers offering Japanese products all over the world. Electric car and component sales are predicted to increase in Japan as a result of several collaborations and joint ventures.

What is the global demand for Power Inverter in terms of revenue?