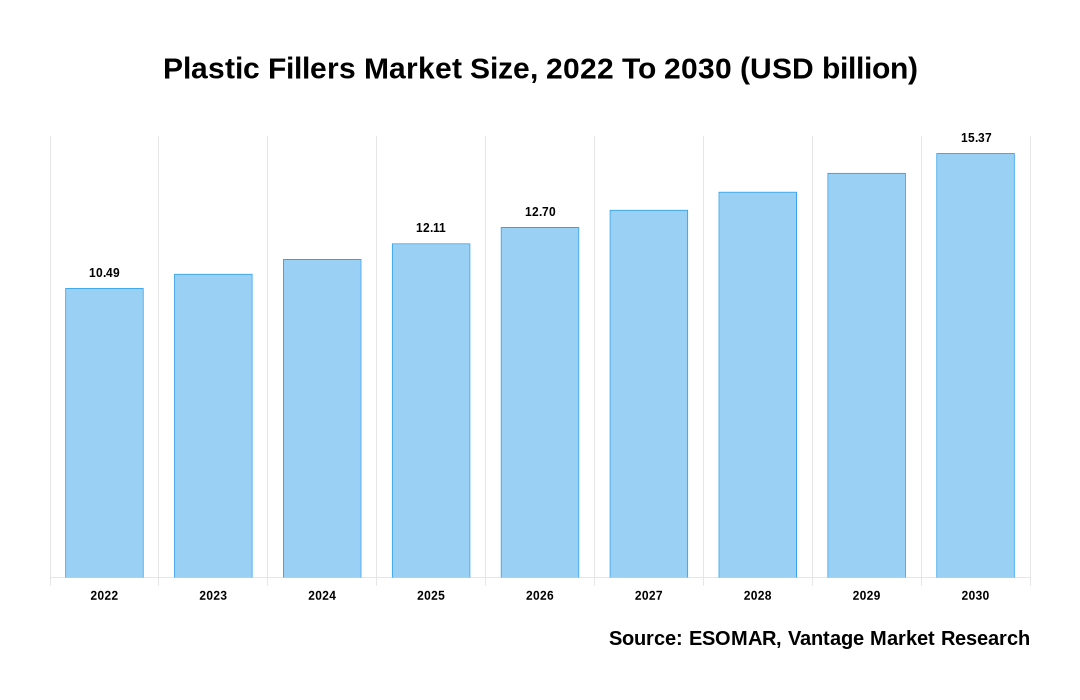 Global Plastic Fillers market is projected to attain a value of USD 15.91 billion by 2028 from USD 10.60 billion in 2021 at a CAGR of 5.1% during the forecast period. Demand for Plastic Fillers used in all types of uses is very high. Many engineering companies are producing goods that contain these types of Plastic Fillers. Although the use of plastics has become widely popular, the production of plastics has not increased to meet this demand. The high demand was due to an increase in manufacturing processes and use of new materials which require plastic filler to give better.

Demand for Plastic Fillers to Remain Strong During the Forecast Period

Plastic Fillers are being used in more and more applications of any type of goods. Plastic filler demand is expected to rise over the forecast period because of new products that require Plastic Fillers. In some cases, plastics have been replaced by other materials such as glass or metal products which can be prohibitively expensive products for manufacturers. The price has been a constant source of concern from consumers who had been forced to bear higher costs during these periods. This increase is due to the growing production industry and the use of newer types of materials using Plastic Fillers. Use in some countries is restricted due to environmental concerns about plastic usage but it was not expected that there would be a significant decline in its usage over the next five years. There is also growth expected in other applications such as construction, pharmaceuticals where plastic filler would be needed than ever before.

By Type, Demand for Plastic Nano Fillers to Remain Strong

There are different types of fillers used for different purposes in polymers such as glass fiber which is strong, stiff and lightweight but very bulky when compared with plastic made from it, talc-like powder helps reduce flow during processing but also reduces stiffness, mica can be expensive but helps increase toughness and strength and also lowers friction, calcium carbonate - good thermal insulator but expensive.

Polymer nanocomposites have received a lot of attention over the past few years because they combine the favorable properties of both components in an improved way to produce enhanced materials with completely new properties. In most cases adding nanoparticles to polymers increases the stiffness and decreases their density so it is easier for companies to meet government's rules about transportation safety, which includes lower weight of a vehicle thus less fuel consumption. It has been estimated that reduction in weight can be as high as 30-40%.

Asia Pacific is the largest consumer of Plastic Fillers as it uses over 5.5 million tones daily, which is half of the world's consumption. China, India, Indonesia, and the Philippines were among Asia's leading users of Plastic Fillers. China uses 3.7 million tons of Plastic Fillers, which is about 47 percent of the total consumption in Asia Pacific. China has over 2,000 plastics manufacturers producing 4.3 billion pounds (1.9 million tons) each year with annual growth rate of 9 percent. Production is expected to rise between 15 and 25 percent per annum due to the strong demand for products related to packaging and consumer goods. About 30% of China's plastic bags are exported to other countries.

The Plastic Fillers is Segmented as Follows:

What is the global demand for Plastic Fillers in terms of revenue?