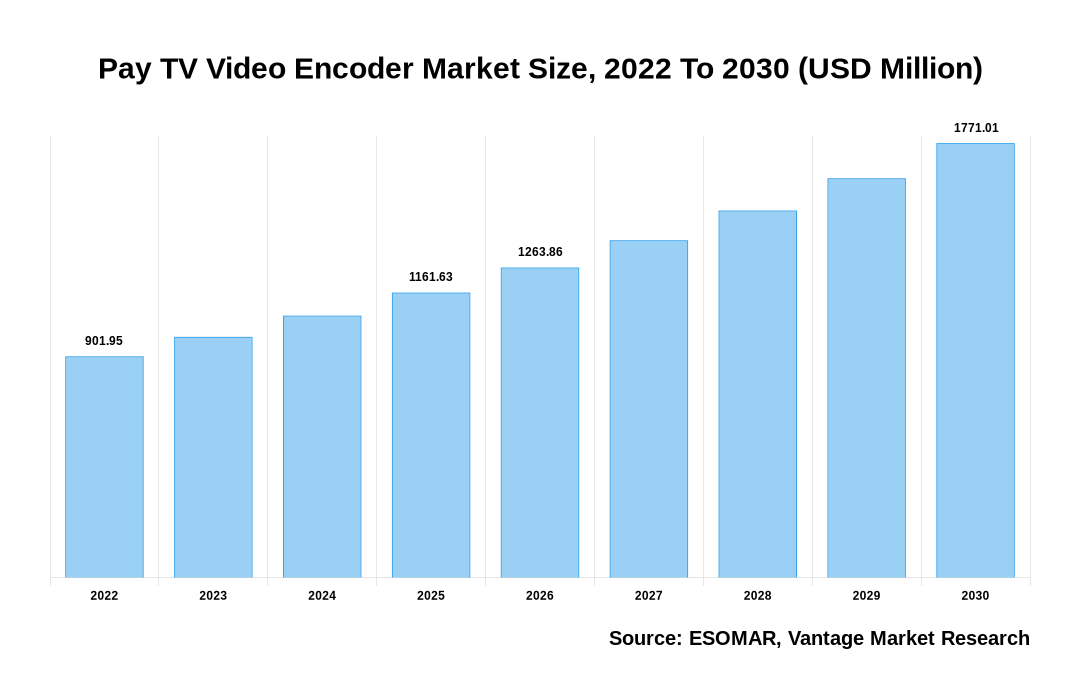 Encoders are hardware or software products that produce visual output in a single compressed format and are offered commercially. Analog, digital compressed, or digital uncompressed video can be used as input. In the market sizing, the definition also includes Integrated Receiver Decoders (IRDs) with integrated encoders, but not IRDs without encoding. This research also divides pay- TV video encoding systems into three categories: cable, satellite, and IPTV (IPTV). These encoders are used by multiple service operators (MSOs), such as Comcast and Cablevision, to compress content before it is distributed to cable subscribers.

The encoders are used by satellite TV MSOs like DIRECTV, Dish Networks, and Sky TV to compress programming for direct-to-home (DTH) distribution to satellite subscribers. Due to the increased uptake of cable, satellite, and Internet Protocol Television (IPTV) video services, the market for pay TV video encoders has grown rapidly in recent years. There are three types of pay TV video encoders on the market: cable, satellite, and Internet Protocol Television (IPTV). Increased acceptance of HD content, HD programming, and the development of VOD applications, as well as increased penetration of advanced encoding formats such as AVC in various regions of the world, are some of the primary driving forces for the pay TV video encoders industry.

4K televisions have become commonplace. However, due to the restricted availability of 4K programming on broadcast and streaming networks, it is difficult to fully utilize the capabilities of 4K TVs. Although some 4K content is available through OTT providers such as Netflix, Hulu, and Prime, powerful internet connections, high bandwidth, and high-efficiency video coding are required to broadcast such content. As a result of the poor adoption of high-efficiency encoders like H.266 and AV1, streaming and broadcasting of 4K content is constrained. HEVC (H.265), the most recent video compression technology, is more efficient than prior standards like MPEG-2 and MPEG-4. Although switching video codecs provides bandwidth benefits, patent license conditions are ambiguous, workflow components are lacking, and implementation costs are prohibitive.

Based on Product Type:

On the basis of Product Type, the market is segmented into Cable, Satellite and Internet Protocol Television (IPTV). In 2020, the market was led by the Cable sector. In most nations, cable is the most popular television provider. IPTV services and Satellite are putting pressure on cable operators. DTH stands for Direct-to-Home (Satellite). DTH has exploded in popularity in the United States, and it is only getting started in undeveloped countries. In comparison to satellite and cable, IPTV is a relatively young service.

On the basis of Application, the market is segmented Video on Demand (VOD), Games and Interactive Advertisements. The global market for Pay TV Video Encoder is led by Interactive advertisements which are likely to maintain its lead during the forecast period. Over the last decade, the interactive advertisements business has transformed tremendously, opening up numerous chances for traditional broadcasters. Content is developed for a specific channel and then transmitted to millions of viewers in the traditional media value chain. The most important trend in the broadcast sector is delivering media material to any connected device. Rich media services, including as video streaming, are available to individual clients via a range of devices, regardless of their location. The quick adoption rate of various forms of content available on the Internet, as well as the introduction of devices such as tablets and smartphones that enable high-quality viewing experiences, are driving the acceleration.

North America is projected to acquire the largest market share during the year 2021 with a share of 38.50%. North America has always been on the front edge of technical breakthroughs, and the telecom industry is no different. The US, Canada, and Mexico make up the North American market. The region is home to major firms such as Cisco, Harmonic Inc., and Honeywell Security, among others. The video encoder market in North America is the most competitive and dynamic in the world. Furthermore, in comparison to the rest of the world, the region is predicted to grow and adopt new technology at a quicker rate.

Pay TV Video Encoder Market to Reach Valuation of USD 829.5 Million by 2028 - Growing market for OTT services in developing countries to Drive the Market Growth
From the period 2022 to 2028, the Global Pay TV Video Encoder Market is expected to reach USD 829.5 Million in terms of revenue, growing at a Compound Annual Growth Rate (CAGR) of 9.1%. Televisions with a resolution of 4K have become commonplace. However, it is difficult to fully utilise the advan...
Read More

What is the global demand for Pay TV Video Encoder in terms of revenue?