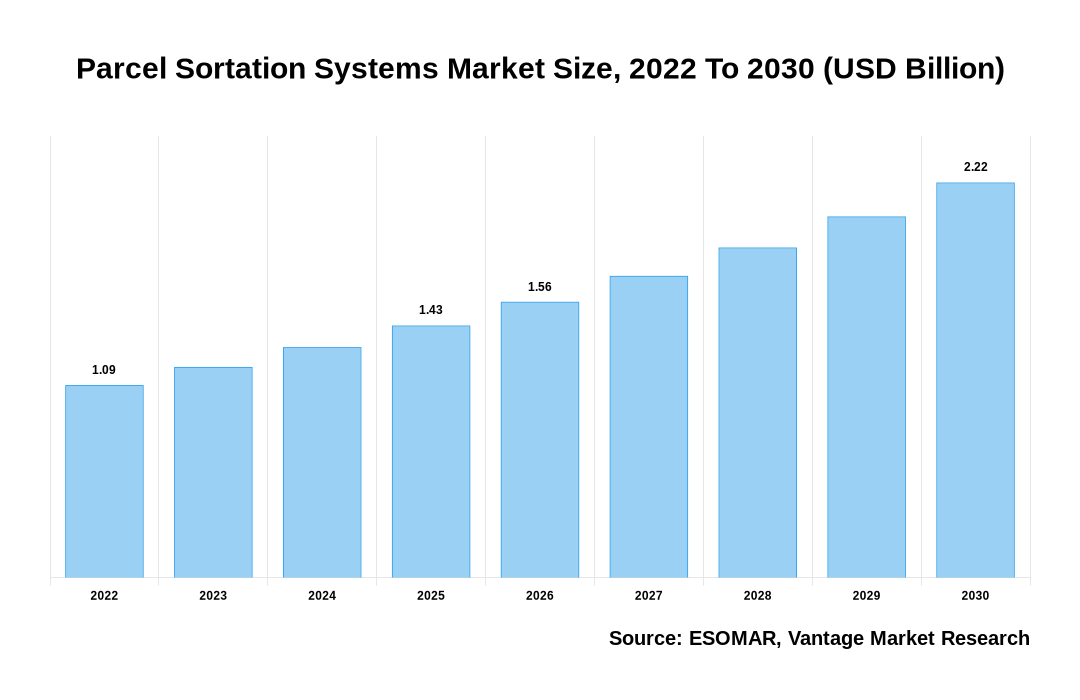 Global Parcel Sortation Systems market is valued at USD 1.61 Billion in 2021 and is estimated to reach a market size of USD 3.29 Billion by 2028 at a CAGR of 9.5% during the forecast period.

As the global economic situation remains uncertain and businesses continue to look for ways to reduce costs, the demand for Parcel Sortation Systems is expected to rise over the predicted period. Parcels are an important part of many e-commerce companies' business models as they allow consumers to buy products from retailers online and have them delivered directly to their home or office. This means that these retailers need parcel sorting systems in order to efficiently dispatch goods; whether it be through a delivery company such as UPS, FedEx or a postal service. One industry that could see a significant increase in demand for this type of machinery is e-commerce retailing.

The demand for Parcel Sortation Systems is expected to increase rapidly, as the number of consumers using e-commerce platforms increases. With growing internet penetration rates in developing countries, particularly in Asia Pacific and Latin America, the acceptance of online retailing has also been increasing at a significant rate. As internet penetration continues to grow across developing economies, the demand for Parcel Sortation Systems will see substantial growth over the forecast period. The rise in consumer spending power along with high disposable income levels has led to an increased demand for luxury products among consumers which could be fulfilled over e-commerce platforms or through conventional offline channels. This is expected to drive the demand for express and courier delivery channels across various end-user segments such as manufacturing and services, government and public sector, retail and wholesale distribution, transportation and logistics.

Parcel sorting is becoming more and more important for postal operators because of the continuous increase in parcel volumes to be delivered. New automated sortation systems are being developed to handle the growing demand. Also, new systems are being looked at to replace aging equipment. As such, there is demand for high-performance hardware devices capable of storing large databases, performing order sorting functions, weighing parcels, scanning barcodes and performing other functions. It has been found that the existing hardware devices are not able to handle the amount of work required. Some have reported bottlenecks in throughput caused by performance issues where data transmission rates are too low to keep up with process speeds.

The majority of parcel sorting equipment is currently using "embedded" or "custom-built" hardware units that thus cannot be easily upgraded or expanded either for software functions or processing power. This might force operators to replace their existing systems at significant costs. As such, there is demand for high-performance hardware units capable of storing large databases and performing order sorting functions, weighing parcels and scanning barcodes at high-speed allowing operators to sort more packages per hour while keeping running costs down.

The Asia-Pacific region is expected to show strong growth during forecast period. Currently, it is the fastest growing market for parcel sortation system due to rapidly expanding retail and e-commerce industry in developing countries like India and China. The growth is further supported by increasing penetration smart phones and internet connectivity. As per our findings, around 34 million parcels are sorted every day across Asia Pacific. With economies like India and China consolidating their position as global/regional hubs for e-commerce activity, the demand for automated warehousing solutions including PSS has been increasing significantly over the past few years.

China, Japan, India and Indonesia are the leading countries in Asia Pacific for parcel sortation system market. The retail industry is one of the key drivers for development of this automated warehousing solutions across the region. With the rise in online shopping portals, retailers have been facing difficulty to manage huge volumes of growing parcels which need to be delivered on time at their customers' doors. PSS provides an advantage by sorting out parcels and automating multiple processes within a warehouse and supply chain management process such as order fulfillment and re-allocation while integrating with existing e-commerce platforms seamlessly.

Some of the key players in the global parcel sortation system market are Muratec (Japan), ematic (US), BEUMER Group (Germany), Vanderlande (Netherlands), Bastian Solutions (US), Siemens (Germany), Invata Intralogisitcs (US) and Interroll (Germany).

The Parcel Sortation Systems is Segmented as Follows:

What is the global demand for Parcel Sortation Systems in terms of revenue?