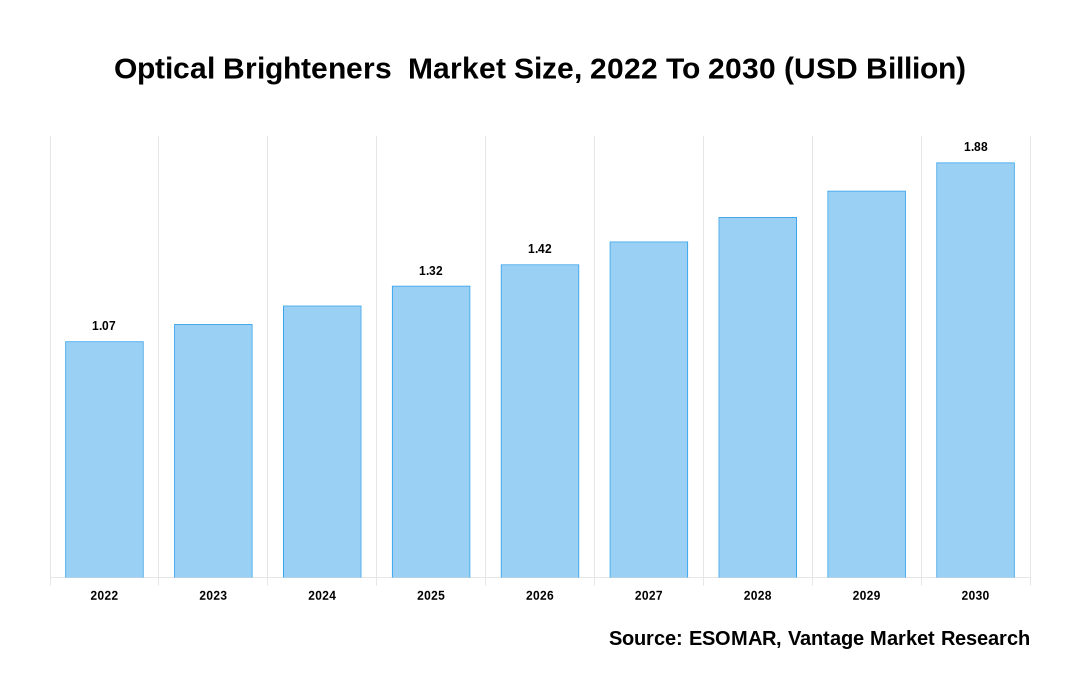 Global Optical Brighteners market is valued at USD 1.0 Billion in 2021 and is estimated to reach a value of USD 2.0 Billion by 2028 at a CAGR of 7.5% during the forecast period. Optical Brighteners are widely employed in the textile industry, as well as in the laundry and detergents industries, at various stages. Optical Brighteners absorb light from the violet and ultraviolet ends of the visible spectrum and only emit blue light, giving the observer a whitening effect while also removing any yellow tint that causes an undesirable visual aspect. They keep fabrics looking new and bright for a long time, which is why they're so important in the laundry, textile, and garment industries. The color white is frequently linked with purity and cleanliness in textile items. To improve the economic value of textile goods, chemical bleaching methods are utilized, and Optical Brighteners chemicals are used in detergent powders.

COVID-19 has spread to almost every country and industry on the planet. Demand for Optical Brighteners has declined due to sluggish manufacturing operations. The market, on the other hand, will eventually return to its natural growth pattern as economies open up and limitations are eased.

In 2021, the Optical Brighteners market will be dominated by the synthetics and plastics sector. The expanding use of Optical Brighteners in a variety of end users, such as papers, textiles, plastics, and detergents, is propelling the market forward. It's often used in the plastics sector as an addition to give polymers a brighter appearance and increase the degree of whiteness. Engineering plastics such as thermoplastic polyurethanes, styrene homo- and copolymers, polyvinylchloride (PVC), and polyolefins, among others, use optical brighteners. They are also widely used in the textile sector for whitening and brightening linen, wool, silk, cotton, and polyester. However, rising pollution levels are reducing the usage of Optical Brighteners in the detergent business, which is likely to stifle innovation.

By 2021, the consumer products sector will have dominated the market for Optical Brighteners . To enhance manufacturing quantities, governments of emerging economies such as China and India are helping local manufacturers and institutes in R&D of Optical Brighteners -based goods. The chemical industry's upcoming development in consumer products projects in many countries, including Germany, France, China, and India, is also encouraging market expansion. As oil prices have fallen, raw material costs have fluctuated, causing market volatility. As a result of this tendency, margins for Optical Brighteners resellers and users have shrunk.

In the Optical Brighteners market, growing applications in the printing inks and photo processing sectors are a big opportunity. The use of brighteners in the paper throughout the manufacturing process has been observed by printing enterprises. The brighteners absorb ultraviolet light and then radiate it, giving the paper a whiter appearance. The Indian printing business is developing at a rate of 12 percent each year, according to the Indian Papers Manufacturers Association. As a result of this expansion, the market's opportunities have grown.

The market for Optical Brighteners is being held back by government rules prohibiting the usage of some of the chemical agents used in the brighteners. Optical Brighteners , on the other hand, are not biodegradable and can induce allergic reactions in the end-user, which may limit demand for optical brighteners and limit the global market's growth. The brighteners, according to REACH (Registration, Evaluation, Authorization, and Restriction of Chemical Substances), cause allergic skin reactions and eye discomfort, posing a health risk. As a result, the use of these brighteners in various agents has been limited, functioning as a market limitation.

The market in Asia-Pacific is boosted by improving economies and growing demand from paper, textiles, detergents & soap, synthetics & plastics, packaging, and other applications. The market for Optical Brighteners in the region is the second-largest in the world. In 2020, Europe had the highest share of the Optical Brighteners market, while Asia-Pacific is expected to develop at a faster rate over the projected period.

With the presence of key industry players' manufacturing sites in the country, the United States is the world's largest manufacturer of Optical Brighteners . The majority of Optical Brighteners manufacturing factories are located in China and the United States. The majority of the major players are backward integrated, giving them an advantage over alternative suppliers. In China, India, and other Asia-Pacific countries, the threat of new entrants is quite real.

What is the global demand for Optical Brighteners in terms of revenue?